The Land of the Magic Flute, A Graphic Novel
by Alamo City Opera

A collaboration of OPERA San Antonio and SOLI Chamber Ensemble

Part of The San Antonio Symphony’s annual, month-long festival, celebrating the music of Wolfgang Amadeus Mozart, The Land of the Magic Flute will be another unique presentation befitting SOLI’s creative and award winning programming, this time in collaboration with OPERA San Antonio.

The Land of the Magic Flute is a graphic novel created by director Fons Schiedon in collaboration with composer Philippe Lambert. This modern telling of the story from one of Mozart’s most celebrated operas, The Magic Flute, combines contemporary drawings and animation with original music inspired by thematic materials from Mozart’s own score. SOLI will directly collaborate with Lambert and Schiedon on the new version of the incidental music throughout the graphic novel as well as arrange and perform the seven, key Mozart arias featured in the graphic novel, which further define the characters in the story.

This one-of-a-kind concert will truly be a unique experience for San Antonio audiences.

The Land of the Magic Flute will feature local and regional artists:

Mystery, adventure and the war of dark forces for the reign of the Golden Circle of the Sun are elements of Mozart's most popular opera The Magic Flute. Numerous stagings and highly diverse interpretations of the masterpiece have fascinated audiences all over the world for more tha 200 years.

SOLI & OPERA San Antonio present The Land of the Magic Flute, a modern and fast-paced adaptation of the classic, with intricate hand-drawn illustrations and animations and a musical concept that features seven glorious arias from the opera and an incidental music that plays with Mozart's composition to create a rich and unique world. Immerse yourself int he adventure and discover the world of opera in a new dimension!

To bring this unique project to life, SOLI will be joined by the motion graphic novel's director, Fons Schiedon, composer of additional original music, Canadian sound artist Phillipe Lambert, and a cast of talented young singers from OPERA San Antonio.

The Land of the Magic Flute, A Graphic Novel
by Wolfgang Amadeus Mozarat, adapted by Fons Schiedon and Philippe Lambert
Alamo City Opera 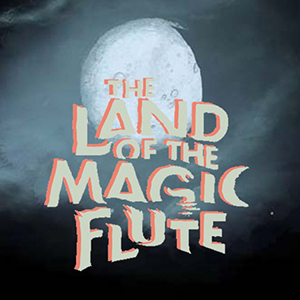