The Sorcerer
by Gilbert & Sullivan Austin

The Gilbert & Sullivan Society of Austin presents its summer 2015 grand production of The Sorcerer. Nine performances will be presented at the Worley Barton Theater at Brentwood Christian School, June 18-28. This popular classic was W. S. Gilbert and Arthur Sullivan’s third comic opera of their fourteen. The plot is based on a Christmas story, An Elixir of Love, that Gilbert wrote for a magazine in 1876. 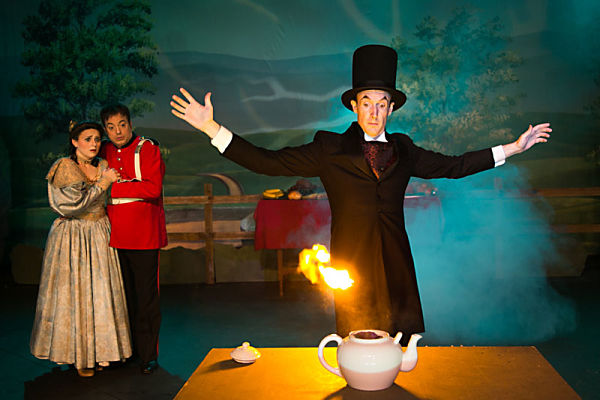 Artistic Director Ralph MacPhail, Jr., returns for his 15th summer with the Society, along with Jeffrey Jones-Ragona, enjoying his 19th season as Music Director. Bill Hatcher returns as Production Manager.

The Sorcerer opened in November of 1877 at the Opera Comique in London, where it ran for 178 performances. It was a success by the standards of that time and encouraged the collaborators to write their next opera, H.M.S. Pinafore. The Sorcerer was the first G&S opera to use all the major character types and typical range of songs that would appear in their later collaborations, such as comic duets, a patter song, and novel ensembles. The chorus is essential, taking part in the action and often acting as an important character in its own right.

The setting is a small rural village inhabited by gentry and country folk. A young man, Alexis, is obsessed with idea of love levelling all ranks and social distinctions. To promote his beliefs, he invites the proprietor of J.W. Wells & Co., Family Sorcerers, to brew a love potion. This causes everyone in the village to fall in love with the first person they see and results in the pairing of comically mismatched couples. In the end, Wells must sacrifice his life to break the spell. The satire in the opera is focused on old-fashioned conventions of aristocratic benevolence and grand opera. It’s a magical story, filled with topsy-turvy humor and beautiful music. The Sorcerer sets the stage for the wonderful collaborations that followed during the subsequent two decades of collaboration.