Teatro Audaz San Antonio is a new artistic, theatrical initiative created by San Antonio academics, professionals, and performers. The company, with Executive Director Alison Vasquez, MFA, Artistic Director Laura T. Garza, MFA, and co-founder Paula Rodriguez, MFA was created to explore the varied experiences and cultures of Latinxs, immigrants, women, and LGBT individuals through accessible teatro. The company’s top goal is to produce and showcase the creative talents of Latinx and Tejano artists in San Antonio. To accomplish this mission, the company will hold a variety of performances, readings and trainings throughout San Antonio.

The company is launching on September 22nd 2016, in honor of Hispanic Heritage Month, with three staged readings and a launch party fundraiser. Information on the events is as follows: 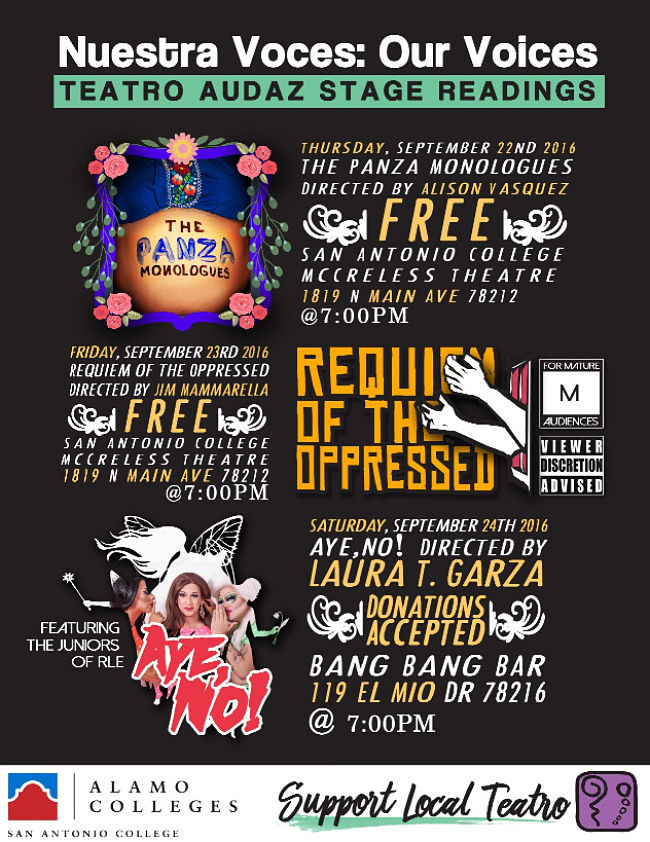 Friday, September 23rd at 7:00 pm – Requiem of the Oppressed by Maximo Anguiano, directed by Jim Mammarella at San Antonio College in McCreless Theatre -- the evening will include panel discussion on the status of prisons in America immediately following the performance

To kick-off the initiative, Teatro Audaz is launching a fundraiser to raise money to sustain the company. The crowdsourcing will take place on the Indiegogo platform and can be found here.

The group hopes to have your support in this audacious new development. If you’d like to make a tax-deductible donation, please contact the group. More information on the remaining 2016-2017 season, company members, and company endeavors can be found at www.teatroaudaz.com or @teatroaudazsa on social media.