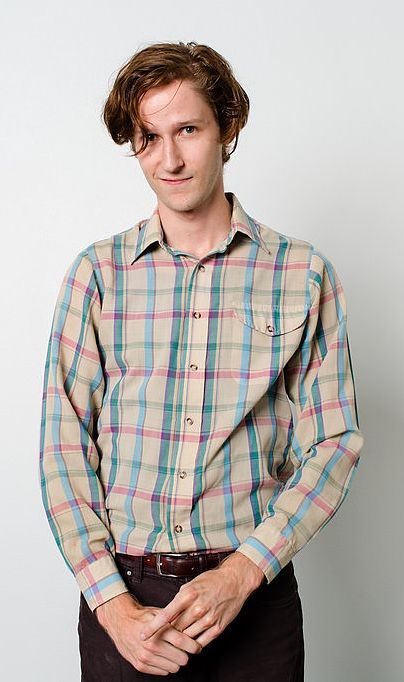 When describing Aaron Johnson’s origins in the world of theatre, the song “What I Did For Love” comes to mind.  Aaron was in his first play in the third grade — not A Chorus Line, but a musical in which he was cast in the chorus.

“I’ll be honest,” he admits, “I did it because I had a crush on a girl. Actually, my best friend and I both did. So we were kind of in a competition to win the girl.”

Auditioning for the musical was Aaron’s stealth move. He thought he could get to know her, spend those many hours in rehearsal after school with her, and share inside jokes at recess the next day.

But she was cast as the lead and he was back in the chorus, so he hardly had the opportunity to see her. Regardless, they started dating, and she became his first girlfriend.  Puppy love seemed to be on the right track until a couple of weeks later at a fateful baseball game.

“My best friend and I were on the same team. I remember running out to the outfield — Coach rarely put me in — and I’ll never forget this: She was cheering for my best friend.”

Aaron’s new girl and her friends were spelling out the name of his best friend, and soon afterward the two were dating. Aaron was left crying in the arms of his best friend’s mother.   He didn’t care for musicals too much after that. Carrying the remains of that broken heart in that small Indiana town, a kid grew up with a lot of feelings and nowhere to express them.

Aaron Johnson eventually returned to theatre, and he has been there ever since. He majored in stage performance at the University of Evansville.  Looking over his theatrical resume, he picks one of his favorite roles: Daniel, the despairing older brother slipping into mental illness in Tribes by Nina Raine, one of the hardest things he has ever done.

“I really got into the research. And so many stories were breaking my heart. On top of that, crying every night onstage, slightly losing my mind, being an all-around fuck-up -- it was hard. I couldn’t plan what Daniel’s breakdown would be every night. I hit emotional marks for sure, but I would just let it come up, and pretty soon I’m backstage, sweaty, crying and hugging Stephen [Drabicki], who played my brother. I think my body started to mirror those emotions. I was doing so much yoga and exercise, but it still came home with me.”

Writing about that production at the Zach Theatre in January and February of 2016, CTX Live Theatre’s Michael Meigs devoted an entire paragraph of his review to Aaron’s performance:

Austin newcomer Aaron Johnson fully matches the experienced and mostly out-of-town competition. In Street Corner Arts' Skylight last December he tied together plot threads with brief first-scene and last-scene appearances, also as a troubled British youth; in Tribes Johnson as the troubled older brother Daniel calibrates and steers a role that starts in hassled annoyance and unhappiness and degrades gradually to distraction, anger and physical incapacity. With the fury inherited from his father Daniel keeps others and the audience at a quivering distance. This subtle performance makes deeply satisfying the moment of reconciliation that caps the plot of Tribes. Keep an eye on this actor, Austinites: he's scheduled to appear in The Explorer's Club at Austin Playhouse in April.

Aaron remembers people who approached him after the show, especially a mother and daughter.  The daughter told him she also had heard voices; the mother said the look in Aaron’s eyes during the show brought back memories of her daughter’s complete breakdown, the worst day of her life.

“For an audience member to want to come up and talk to me at all is amazing. If I can get them to take the story home with them, then it feels like we shared communion. As of today, at the age of 24 in 2016, that’s what I’m about.”

He made his way to the theatre town of Austin last year, and he has tremendous respect for theatre groups here that are deep in the community, getting new people into the seats and lifting other companies up.

“They‘re working their butts off. They’re working to pay their artists more, make ticket prices less, and get their stories out there. I don’t care if it’s in a professional theatre or a warehouse. Church can happen anywhere.”

By ‘church’ Aaron is referring to the communal spiritual experience of creating and performing theatre productions. In his short time here he has worked with the Zach Theatre, Austin Playhouse, Penfold Theatre, and Street Corner Arts, among others. He finds that Austin producers pick amazing plays, and he enjoys working with companies that choose tough or even ridiculous stories. Most of all he appreciates the opportunity to work. 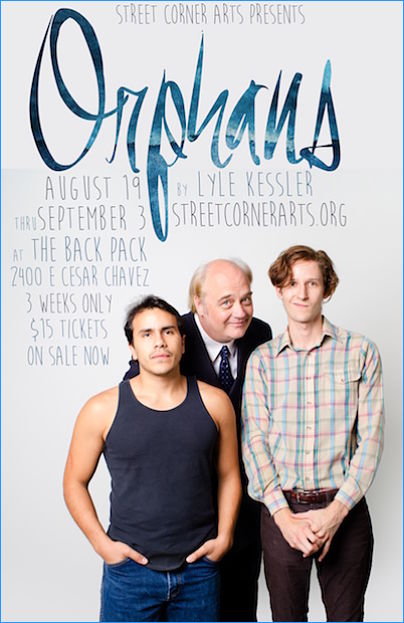 “Since I was a kid, I’ve been hell-bent to change the world, and it’s so easy to sit backstage before a show and ask, ‘Am I doing enough?’ And I mean, no, I’m not. I’m not involved in the community enough, I’m not volunteering enough -- but these companies have a vision. They’re searching for communion with this power that moves us in our seats, they’re trying to be a gentle voice in a quickly-growing troublesome world. That’s what I’m kind of holding on to.”

His current production is Orphans by Lyle Kessler, which he’s co-producing with Street Corner Arts, appearing with Michael Stuart and Christopher Alvarenga. He has been carrying around the script to Orphans since he was a freshman in college. He did a scene with a good friend, and they tapped into something very special.  He considers it an incredible story, one that has been translated in so many languages. “It hits at something universal and true--and, sadly, tragic,” he says of the play, “but at the same time, it’s so specific and unique to these two brothers.”

Performances of Orphans take place over three weekends, August 19 - September 3, at the Back Pack on East César Chávez. (Click to view CTXLiveTheatre listing.)

Immediately after that he will appear at the Off Center for three weekends, September 8 - 25, in Totalitarians by Peter Sinn Nachtrieb, produced by Theatre en Bloc, with Barbara Chisholm Faires, Elizabeth Doss and André Martin. (Click to view CTXLiveTheatre listing.)

Aaron has a number of other projects on his calendar, and he expects that with each new theatrical venture he'll continue to learn and make a difference. He feels he has only just begun to learn what acting is all about; the best Aaron he knows is the Aaron who’s aware of his weaknesses and his limitations.

His response when asked for advice for his fellow actors:

“Find the joy in the business. Auditioning, networking, witnessing, all of it, it’s all part of the thing that makes us artists. Whatever I seek next, whatever my next goal in life is, I tell myself it’s already happening. The joy comes from finding out how.”