Populated with morbid themes, yet propelled by a bright score courtesy of Howard Ashman and Alan Menken, the musical production of Little Shop of Horrors is an intriguing hybrid of darkness and light – like finding an orchid in a landfill.

It tells the story of Seymour Krelborn, the hapless employee of a Skid Row flower shop run by the cranky Mr. Mushnik. The store’s only other employee is the pretty but tacky Audrey, who is the most beautiful creature in the world in Seymour’s eyes.

Mushnik announces that he will have the close the shop permanently because business is so bad. Desperate to keep his job (and to stay close to Audrey), Seymour shows his boss a mysterious exotic plant that he found after a solar eclipse. He insists that putting it on display in the window will certainly draw curious pedestrians into the place. He’s even named it Audrey II, in honor of his would-be love. 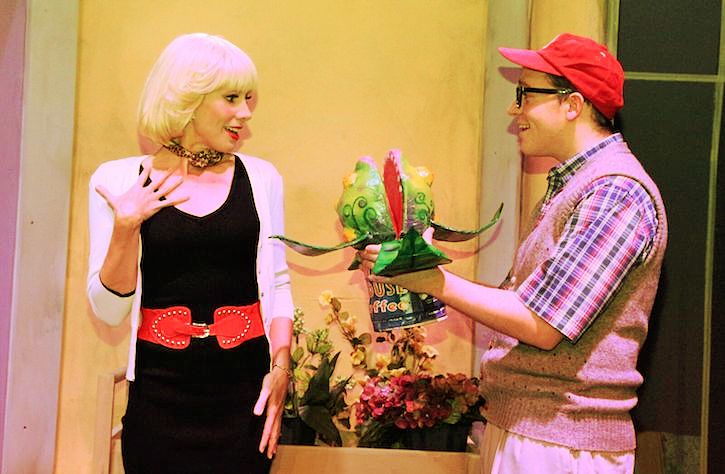 Sure enough, it doesn’t take long for a customer to come in to admire the plant and purchase $100 worth of roses. Thrilled, Mushnik agrees to go along with Seymour’s plan.

But Audrey II stops thriving. As a matter of fact, it appears to be dying, and it won’t eat anything Seymour tries to feed it. When he accidentally pricks his finger and draws blood, the plant’s mandibles open and Seymour discovers its true diet of choice. When he becomes too weak to feed the plant any longer, so it acquires the power of speech and issues the stern command: “Feed me!” It also promises to make Seymour’s dreams come true in exchange for more human blood. The young man is faced with a moral dilemma. Can he become a killer in order to get everything he wants?

As the nebbish Seymour, Brian Hodges adds another memorable character to his resumé, and he is nicely paired with Paige Berry as Audrey, whose bright outlook on life is in stark contrast with her victimization. Ronald Watson amuses as the kvetsching Mushnik, and Chris Berry is both funny and startling as Orin, Audrey’s sadistically perverse dentist boyfriend. Rebekah Williams, Dorianna James, and Marie Bunch are terrific as the stoop-dwelling Greek chorus, and Darcell Bios totally nails it as the demanding voice of Audrey II. 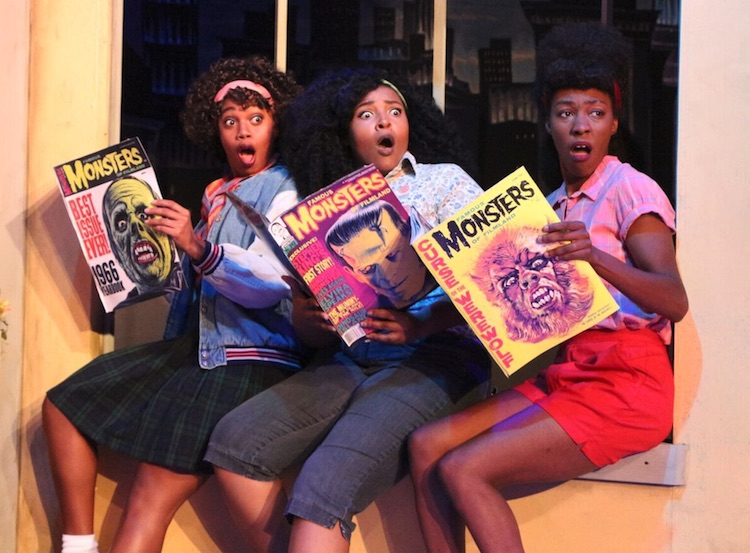 Roger Corman’s famously no-budget 1960 cult horror comedy made the leap to the stage in 1982. Book writer Ashman emphasized the grimmer aspects of the original film while he and Menken humorously (and ironically) added a plethora of finger-snapping tunes. The Woodlawn Theatre’s production carries out this theme with a darkly atmospheric set designed by Benjamin Grabill, which contrasts nicely with the garishly-colored puppets created by Richard Solis and Henry Lozano, Jr. which dominate the stage, especially when Audrey II is at her largest.

Other technical specs are up to the theater’s typically high standards. Benjamin Farrar and Matt Smith provide fine sound and lighting, and Rose Kennedy’s costumes smartly capture the characters’ personalities. Andrew Hendley’s five-piece orchestra and Lizel Sandoval’s choreography are also excellent. The production is well-directed by Tim Hedgepeth, and it makes for a fun Halloween-season treat.

Little Shop of Horrors plays October 13 through November 5 every Friday and Saturday at 7:30 p.m. and Sunday at 3 p.m.

Free parking is available and located behind Vogue College of Cosmetology on W Lynwood Ave. This area is specifically designated for patrons and is patrolled by a uniformed security guard during the run of each show.