Review: The Screwtape Letters by touring company
by Michael Meigs

Max McLean certainly looked the part of Screwtape, the senior demon imagined by C.S. Lewis for his 1942 epistolary Christian novela The Screwtape Letters Portly and with an untidy mane of graying hair, comfortably elegant in a red quilted dressing gown, he was the picture of a sybaritic Victorian gentleman at home in his study with attendant hissing demon.

Attendant demon? Well, yes; one imagines that as a relatively senior member of the administration of Our Father in Hell, a sort of ambassador and mentor to the corps of aspiring tempters and transversers, Screwtape would be entitled to at least one junior assistant. Toadpipe the demon hasn't a word to say in this script but plenty to hiss, and at one point when the word "prayer" is mentioned, Toadpipe has a long and rather nasty spell of visible vomiting.

Lewis's text is a fine exercise in intimate irony, and perhaps it's a little disconcerting to think that it was written as the second great European war got underway in earnest. It's presented as a series of 31 letters written by Screwtape to his nephew Wormwood, a new graduate of Tempters' Training. In this staging, Screwtape dictates the letters to Toadpipe, justifying that minor character's existence on stage and prompting a regular bit of business as the attendant demon scales a crazy ladder and dispatches the letters through a sort of underworldly pneumatic system with a great crash of sound effects and a fiery glow that mounts the pipe.

The Screwtape Letters is an account of a lengthy but ultimately futile coaching session. The aim is to confuse a young human and attract him to damnation at his death, after which the devils will feast upon his soul.

We do not hear directly from Nephew Wormwood; McLean as Screwtape summarizes and regularly belittles or denigrates his nephew's efforts (never failing, however, to conclude his own epistles with the closing salutation "Your affectionate Uncle, Screwtape"). McLean has palpable, audible fun with that signature, pronouncing every sibilant and plosive in mocking style. The nephew reports progress at first, particularly as the young man he's targeting neglects the church. Screwtape has all sorts of sardonic advice on ways to distract the prey from "the enemy" (God). The outbreak of the war is mentioned but it interests Screwtape almost not at all; his focus is perpetually upon distracting, confusing, diverting and luring the prey. 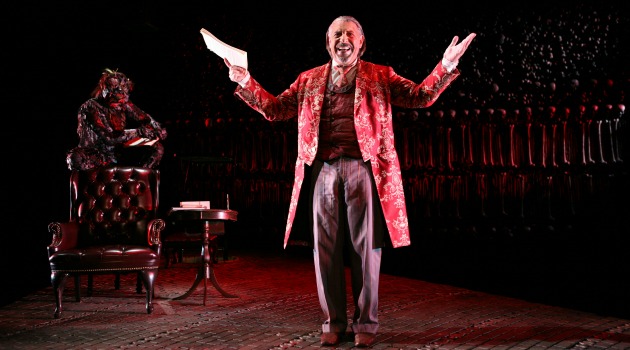 McLean creates a Screwtape who's certainly larger than life. The odd but imaginative set depicts a credibly comfortable afterlife for the evildoer, and McLean's gestures, blocking and vocal treatment convey his great relish for the text.

Eventually the targeted young man courts a sweet and devout young woman who attracts him once more to religion. Screwtape's sage advice is to encourage the man to feel pride at his own new-found humility and devout practice. It comes too late, and Wormwood doesn't manage to put it into effect. The "patient" is killed in an air raid, just as his soul is in fully ripe condition to be received in heaven. Wormwood, by way of punishment, is destined to become fodder for his ravenous uncle and other demons.

The letters constitute a thoughtful, sharply observed essay upon human frailty and -- may I use the term? -- sin. There is much to contemplate here, and other than the ironic tone of it, not very much comedy at all. The language is plain and the concepts are strong, but the piece seemed ill suited to the cavernous space of Bass Concert Hall, even though the audience filled more than half of the downstairs seating.

Sin and shortcomings are extremely personal, the sorts of topics best shared face to face with a confessor, a partner or a supporting group. The commercial realities of McLean's tour, now in its third year, meant that the presentation was necessarily amplified far beyond such intimacy. I found the sound design particularly intrusive; why did we need 85 decibels of infernal whoosh to send off those letters? The capering of the attendant demon was very often distracting.

I appreciate The Screwtape Letters and I laud Max McLean's successful effort to deliver it to audiences across the country. The Lewis estate seems to have been making the most of the writer's legacy, for an audio recording of the work was published in 2009 featuring Andy Serkis ("Gollum" in the movie version of Lord of the Rings), just about the time that McLean first took this performance on the road.

At the second of the two performances at Bass Hall on February 16 the audience seemed nonplussed. They appeared unfamiliar with the text, for they sat silent much of the time, and when the lights faded to black at the conclusion there was a deafening silence. Only when lights came back up for a manifest curtain call did the applause begin. McLean must be used to that sort of stunned reaction, for he stepped forward to address the gathering in his own persona, stressing that he wanted them to understand that he was not Screwtape. He invited the spectators to stay for a question-and-answer session, to start after a brief pause.

As is often the case with touring performances, a stand in the lobby offers all sorts of kitsch, trademarked wares and tchotchkes.  I resisted temptation, perhaps in newly learned  resistance  to Screwtape's schemes. The MP3 Bible narrated by McLean was of little interest, but my eye was attracted by the CD Classics of the Christian Faith advertised on the back of program.

On that CD McLean performs texts of St. Augustine, Luther,  John Bunyan, and others, including Jonathan Edwards' 1741 sermon Sinners in the Hands of an Angry God, a hair-raising text I encountered in a high school reader.  Talk about hellfire and brimstone!  One passage in particular in that very long sermon has stayed with me:

The God that holds you over the pit of hell, much as one holds a spider, or some loathsome insect over the fire, abhors you, and is dreadfully provoked: his wrath towards you burns like fire; he looks upon you as worthy of nothing else, but to be cast into the fire; he is of purer eyes than to bear to have you in his sight; you are ten thousand times more abominable in his eyes, than the most hateful venomous serpent is in ours. You have offended him infinitely more than ever a stubborn rebel did his prince; and yet it is nothing but his hand that holds you from falling into the fire every moment. It is to be ascribed to nothing else, that you did not go to hell the last night; that you was suffered to awake again in this world, after you closed your eyes to sleep.

Screwtape may be too  indirect and subtle an argument. A stiff dose of some Jonathan Edwards before or afterward might help concentrate minds. Or, time permitting, McLean could offer a buffet of excerpts from various Christian texts.

That would, of course, be an entirely different show, but he seems to be headed in that general direction. McLean, a UT alumnus, told a staffer from The Alcalde on-line magazine of the Texas Exes that he and his team are working on a staging for Lewis's The Great Divorce, and they've commissioned a play about Martin Luther, hoping to have it ready for the 500th anniversary in 2017 of the 95 theses that Luther posted on the door of Castle Church in Wittenberg.

Click to view the article "From Sociophobia to the National Stage" by Gaby Guajardo in the Alcalde, February 19

The Screwtape Letters
by adapted from C.S. Lewis
Fellowship for the Performing Arts (FPA) 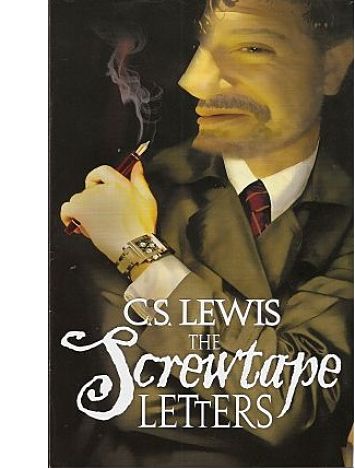 About Fellowship for the Performing Arts (FPA)

Fellowship for Performing Arts produces theatre from a Christian worldview that engages a diverse audience. Based in New York City and founded in 1992 by Max McLean, FPA creates thought-provoking, conversation-starting …

Productions by Fellowship for the Performing Arts (FPA)