The setting for The Price is heavily symbolic, an attic living space abandoned for sixteen years since the death of its occupant. The half-covered pieces of heavy furniture, the wardrobe with its mirror reflecting emptiness, empty frames, bric-a-brac, a sagging armchair, a piano bench at stage center without a piano, a passageway to an unseen bedroom -- designer Desiderio Roybal avoids clutter but embraces the miscellany of memory. 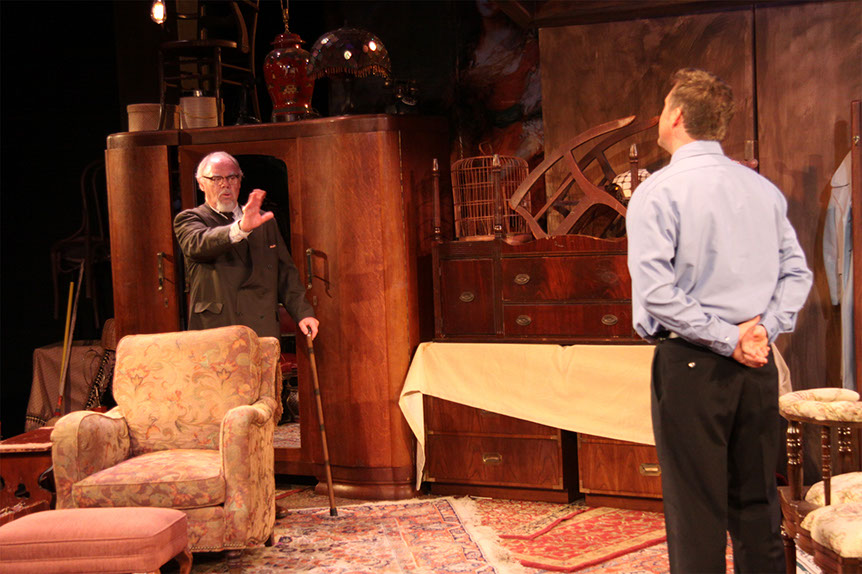 There's a price for all of this, and we will arrive at it through two processes. Because the building's about to be torn down (more symbolism), New York police sergeant Victor Franz has telephoned an appraiser to set a value on these pieces. The jumble of life decisions and missed opportunities has a different, intangible price, one to be searched out through family discussion -- despite the fact that the two brothers who inherited have been completely out of contact for all those sixteen years. 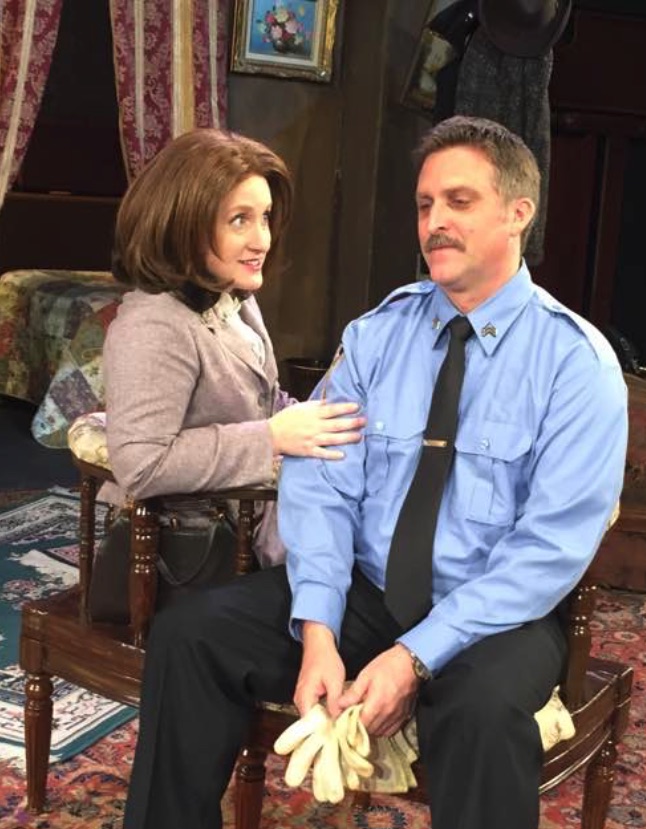 The Price is a theatre work not typical of Austin stages, peopled much more often by youth, ambition, assertion and celebration. Its backward-looking focus on estrangement and regret led me initially to suppose that it was a late work of Arthur Miller, who was almost ninety when he died in 2005. But no: The Price was first staged in 1968 when the playwright was 53, just a couple of years older than Police Sergeant Franz, who's just become eligible for early retirement and is struggling with what to do for the rest of his life.

Miller would write for another twenty-five years. Ironically, this work appears to be the last of his plays to remain in the general performing repertoire of the American stage.

The selection of this play by this performing organization should be no surprise. Eponymous producer David Jarrott has the choice role in this four-person ensemble, that of Gregory Solomon the quizzical and almost rabbinic Jewish furniture dealer. He's so prescient that he can identify an Italian carved table even though it's covered with a  cloth. Solomon (symbolism again) offers a gentle wealth of observation and human wisdom. His first question to Victor Franz concerns ownership and title: to whom do these things belong? That question is literal but rapidly becomes metaphorical.

Jarrott delivers a superb performance.  It is perilously difficult for those outside the New York Jewish tradition to crawl into the mannerisms vocal and physical of such characters, for Mel Brooks and his mischievous kin keep intruding. Although Jarrott is not carrying the weight of Solomon's ninety years, he does not caricature the character; he enters him. Solomon's worn care, patience and wry humor are the contrast to the emotions of the others -- Victor, Victor's wife Ethel and Walter Franz, the brother who has been completely absent from this place and this family for decades.

Miller's plot is flawed. The premise is that the 1929 stock market crash absolutely destroyed these men's father, a fabulously wealthy businessman who retreated to this attic flat, unable to care for himself. The first act establishes Victor for us as the brother who sacrificed ambitions in science to care for his father. Ethel sets forth Victor's discontents and their struggle to make ends meet, then once Solomon the appraiser appears, Miller sends her offstage on an errand to the drycleaner. The second act is devoted principally to the two brothers: Victor desiring confrontation and justification, the affluent surgeon Walter offering schemes without providing any of the emotional payback desired by his brother. 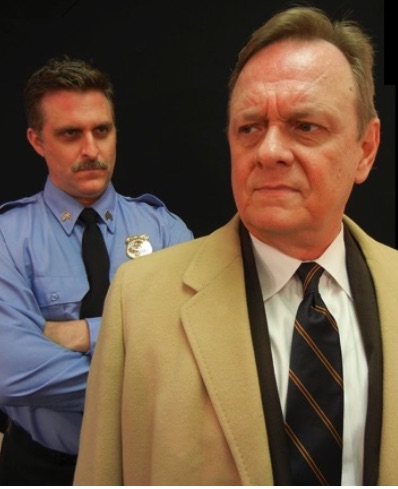 Walter provides revelations but they're thin ones easily picked apart upon reflection. Their parents were cold and avaricious. He, too, has suffered, from his own single-minded ambition and barren emotional life -- but there's an enormous gotcha in his assertion that their father really did have financial resources.  Where have they been all this time, and why did Victor not find them -- at a minimum when the old man died? One must suppose that either the police sergeant was inept or that the surgeon completely appropriated them, forgetting or deliberately neglecting for years to inform a brother condemned to a hard job and unsatisfying existence.

Neither man comes off well. Miller is contrasting Victor's moody and self-defeating sacrifice with Walter's sociopathic pursuit of money and professional success.  Each is condemned to his discontents, Miller's telling us; reconciliation and understanding are virtually impossible.

Director Fritz Ketchum and the cast sustain the pace from the first moments when Scott Galbreath as the uniformed policeman steps into the silent space and reacquaints himself with its memories. Galbreath is the lead in this piece, onstage virtually every second and the center of our attention. Contained and reflective, watchful as perhaps only a policeman can be, he's pushed or confronted by each of the others. Amanda Cooley Davis gives us an Ethel who's stressed but not shrewish, a woman who wants money for the liberating power of it, not for extravagance. Her vocal delivery is subtly convincing, with just enough New York inflection -- a talent confirmed by her credits as dialogue coach for other stage productions. Rick Smith embodies the conviction and unapologetic impatience of Walter the surgeon but, curiously, his vowels and rhythm are straight out of middle America, as if all the New York had been leached out of him in medical school. 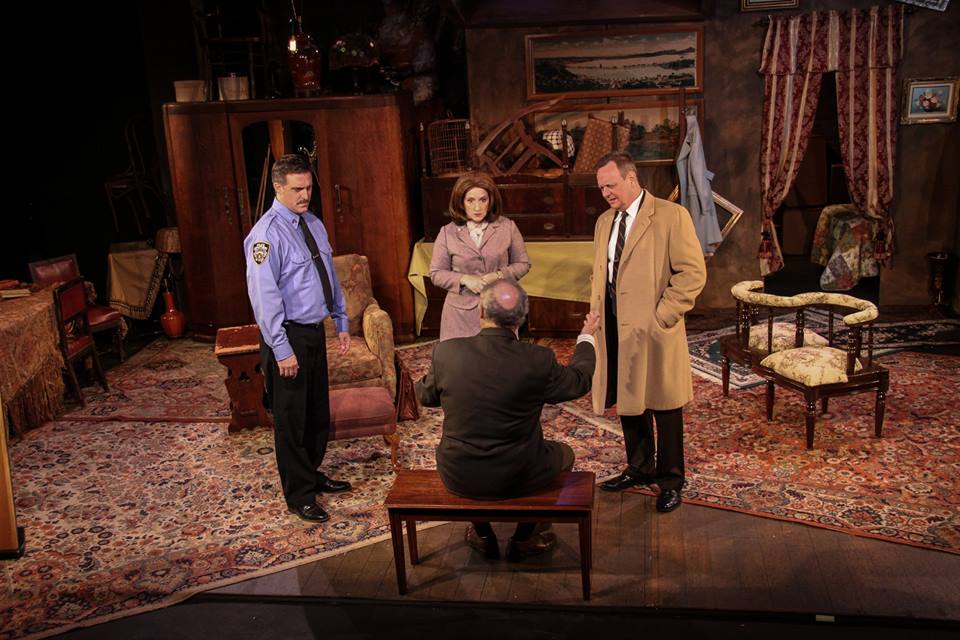 That downstage piano bench serves repeatedly as an anchor, each time with a character seated facing upstage, back to the audience. That's powerful blocking, and in each case it's warranted as the character is receiving information or exhortations from others.

The second-act set-to between the brothers tenses and slackens, interrupted comically from time to time by the apologetic Solomon. Not a moment is wasted or lost. There's a longish and very frank discussion between Victor and Ethel while the doctor's in the next room caring for the ailling appraiser, a scene played, oddly, next to the open doorway with no apparent effort to lower voices. Calibrated emotions rise to the last confrontation. This is a complete, mature and exquisitely realized evening of drama.

And what, finally, is the price? The overt price for this collection of furniture is established and paid in full by Solomon in the final moments, including that extra $50 for the harp with the cracked soundboard (symbolism). Little is changed or paid otherwise, except for the disposition, at last, of the attic's collection of furniture and shunned memories. As the light fades we find Solomon sitting center stage and laughing, in concert with a 1920's 'laughing record' used for the parties of the wealthy. It's impossible to know why exactly the old man is laughing. He could be pleased to find himself back in business after giving it up; he could be marveling at the ironies of the Franz family and of human existence generally; or he could simply be gloating over having cheated these two brothers out of an apartmentful of valuable old furniture.

The price is what you make it, Miller's telling us. It's simply what you're willing to pay.

Click to view the program for Jarrott Productions' The Price 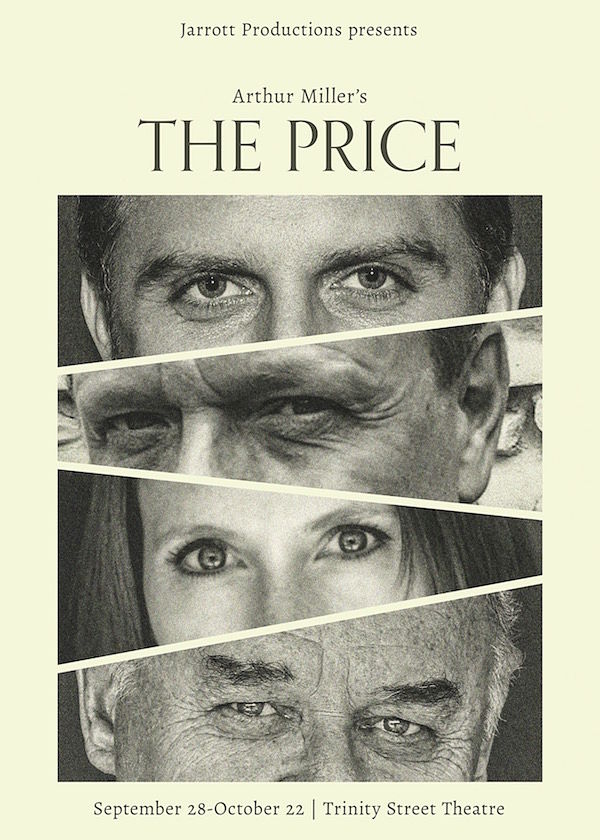