Review: The Man Who Planted Trees by Exchange Artists
by David Glen Robinson

The story of how Sparky Pocket Park on Grooms St. in central Austin came to exist is a drama all by itself, involving City departments and neighborhood voters.  But that story is for another time; I went there on this chilly October evening to see the site-specific work by the Exchange Artists, The Man Who Planted Trees, based on a story by the French writer Jean Giono.  I certainly was not disappointed in my expectations. 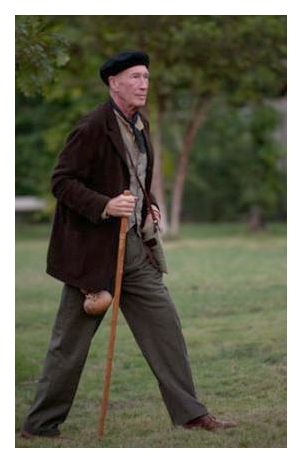 The performers seemed to use every square inch of the park as well as the inside of the maintenance building in the park’s center. Riding on the impressive talents and skill of actor Rommel Sulit, the production turned the tiny half-block pocket park into an Alpine département of France, complete with forests, rocks, waters and wastelands.

The play is plain and simple.  A traveler in the Alps encounters an old peasant who does nothing in life but plant trees, oaks specifically.  Working through the setbacks and limitations of two world wars, the planter at the end of his life leaves a forest legacy comparable perhaps to the creative accomplishments of God, but far surpassing the achievements of almost every other human being.

The work is current in its theme and emblematic of the 21st century’s Green movement, and it gains greater currency by depicting the threats and effects of war. In so doing, the play points to our time’s continual teetering on the brink of total war. We seem incapable of learning what last century’s peasants, innocent of education, knew instinctively.

The production is a site-specific and multi-media affair of the type becoming ever more popular among Austin’s brighter creative lights. Katherine Craft adapted the story for on-site dramatic presentation and Rachel Wiese directed it; but these simple credits do insufficient justice to the hard creative work of transforming the park into the story world of The Man Who Planted Trees. The ensemble work of designers and technical artists resolved many troubling and quasi-unique issues to make the production work. Credits go to Rohan Joseph for original score, Katie Rose Pipkin for projected media, Zac Crofford for technical direction and Jamie Urban for costumes. Their imaginative work with the performance space was aimed at sparking the imagination of all the audience members; it worked in my case as it seemed to do with most of the other observers. 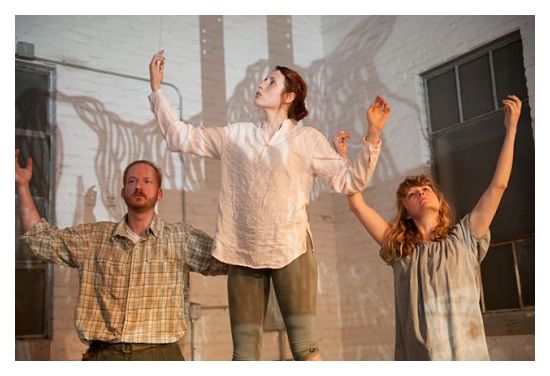 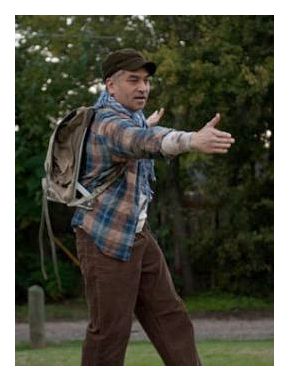 The multiple-role cast of Hildreth England, Alexander Hilary and Vanessa Marie O’Brien proved very flexible in switching from one character to the next on the instant.  I especially enjoyed their portrayals of trees. Seriously. Gene Menger, the absolutely legendary Austin musician, choreographer, painter and actor, played the title character. Forgive me if I have understated or left out any of Menger’s creative fields. His every gesture is imbued with Art. He and Sulit worked together beautifully and with ease to convey the story, a worthy challenge since all but a few voice-over paragraphs of it were in French.

Another central feature of The Man Who Planted Trees is its use of multiple forms, primarily drama, dance and projected media. Acting and dance blended into each other smoothly, even as the sections of each stood out distinctly. Dance, in keeping with its usual usage in theatre, was used particularly for the transitions of the play. The refreshing qualities of the dance kept the audience engaged while we moved from one site in the park to another. The choreographic aesthetic is that of Rachel Wiese, modern with a devotion to story. Her dance and choreography have been seen recently in Zach’s Metamorphoses, in Oceana at the Vortex and in Cambiare Productions’ Messenger No. 4, etc.   The projected images, some moving as though they were film, offered dramatic scene changes and backgrounds while coordinating well with the dance transitions. The images were in fact projected pen and ink sketches by Katie Rose Pipkin, and they created another surprising dimension to this surprising show. Pipkin’s visual work was recently (perhaps is still?) on display in abundance at Epoch coffee bar on North Loop, and Pipkin performed as a puppeteer in last month's Spacestation 1985 at the Off Center. 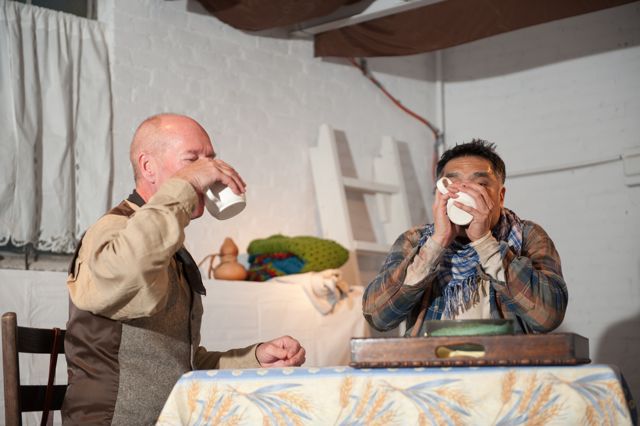 A foreign-language play right here in River City?  Don’t let any perceived language barrier deter you from receiving the delights of this rare work. Your efforts finding Sparky Pocket Park, tucked away in central Austin east of Guadalupe and south of 38th Street, will be amply repaid by artistic satisfaction, lovingly provided by the Exchange Artists.

Unfamiliar with them? The Exchange Artists have mounted two recent site-specific plays, The Story Seekers last year at the Elizabeth Ney Museum and Chekhov’s one-act play The Bear at Black Heart bar downtown on August 30.  The latter was the first installment of their Hot Nights series.  The second installment is slated for November, 2012, with musical collaborators Wild Child.  Look for it; these artists are worth your attention. 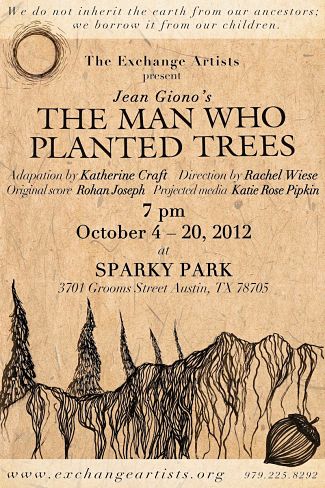