Review: The Story Seekers by Exchange Artists
by Michael Meigs 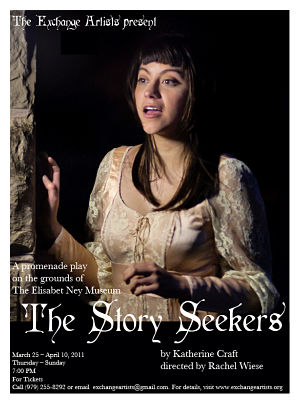 The Elizabeth Ney museum on E. 44th Street in Hyde Park is already haunted.  A crowd of stark white plaster figures and busts stand in the shabby shaddows of the odd small Austin-stone castle that was Ney's final residence and studio from 1902 to 1907.  Among them is a bust of German writer and philologist Jacob Grimm that she sculpted of the old man in Berlin in the 1850's. 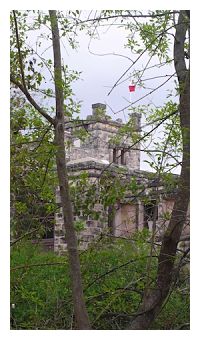 Grimm would have approved of Kattherine Craft's Story Seekers.  He and his brother Wilhelm were Germany's most famous folklorists, seeking out and transcribing the vivid and often nightmarish imaginings of simple folk in the forests and farms.  Tales those folks told to their children and to one another weren't the Disneyfied lore of Cinderella or sweet Hansel and Gretel.  The stories spoke of   abuse, menace, dark woods, shape changers and really really wicked stepmothers.  An essential message was that the world was full of dangers, so children had really better watch out.

Director Rachel Wiese from the Exchange Artists has assembled some of Austin's most attractive and dedicated young adult theatre artists for this piece.  With a pass of her director's magic wand and a consensus of the cast, she has transformed them into children, aged probably from eight to twelve. 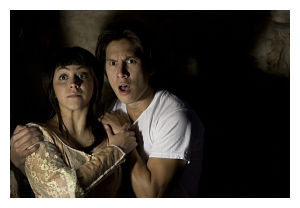 That change is a surprise and a pleasure for those of us who have seen many of them onstage confronting dire grown-up issues, characters and dilemmas.  Self-assured Kelli Bland becomes Princess Bet, a young girl of gallant courage and big-eyed wonder; Karen Alvarado as Lupe the little lost girl has a dark-eyed reluctance that hints at other, more complex roles; Bastion Carboni of sardonic polysyllabic wit and brooding aspect appears as simple and wondering Hans, clad in shorts and bib reminiscent of the Black Forest. 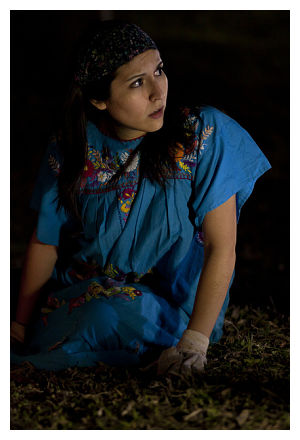 Even more inventive is the inspiration of writer Craft and director Wiese to stage this fable on the grounds of the Ney Museum, just as night is falling.  The story moves across a complex terrain, both of geography and of the imagination, and spectators move with it, escorted by Wiese and an affiliate (on our evening, Trey Deason). 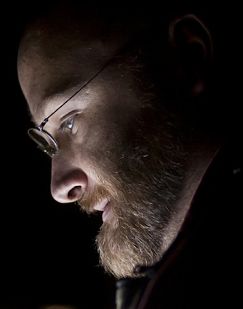 Ney's craggy little mansion "Sursum" becomes, inevitably, a castle; the closer grounds, front and back, become an eternal now where a traitor general (Mindy Rast) murders the rulers and is about to kill their princess-daughter (Bland).  Swords rise over Princess Bet and her boyish boyfriend Gil (Frederic Winkler) but stop, frozen by the spell cast by the Story Teller (Travis Bedard).  He whisks the princess away, down the path and across the bridge that marks a divide between the "real" world of terror and the magic world where the Story Teller has collected other child refugees from world folktales of accident, mistreatment and loss.

The audience crosses that bridge, too, into the grove where the forceful Story Teller marshals his little charges, has them retell their stories and with the benevolent despotism of an incomprehensible grownup dictates their activities, their identities and their relationships. 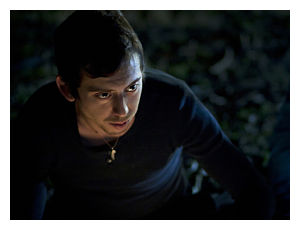 Dark gathers.  The two realms co-exist, each on its own side of the dry creekbed.  We watch as boyfriend Gil resists, yearns and ages beyond the divide while all the children trapped in safety slowly lose their individuality.  When Gil briefly infringes that boundry, Bet hesitates: "But he looks so old!"

The company gives us a play with a bountiful sense of "play" -- recalling the spontanaiety of children's play-acting outdoors, with yelps, flings, 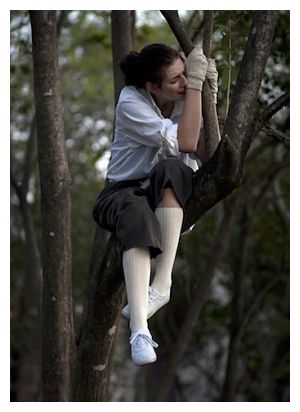 sudden frights and mutual teasing.  The main story, with contests of wills on either side of that divide between imagined "real" and the neverland, is gracefully told and the peripheral touches are delicious -- young actors at the boundaries of the action tumbling over one another with no heed to the principals or the spectators. 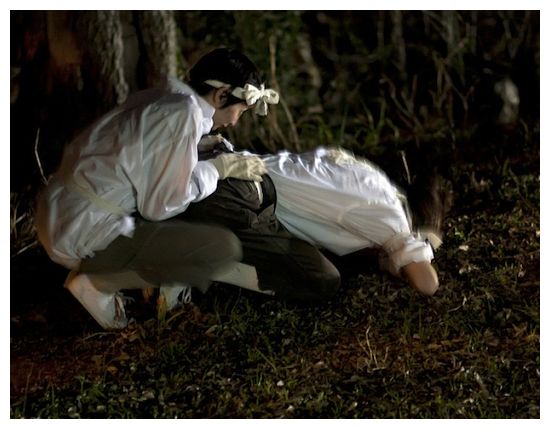 Perhaps the least well realized element of this three-dimensional wandering theatre is the resolution. Craft doesn't posit a clear moral calculus or connection between these two worlds, so the mechanism for Bet's return to the "real" seems arbitrary.

The grove of shelter has features of death, of memory, of limbo and of simple mythos or story telling -- perhaps those children exist only because we imagine them. Perhaps we as audience, as  grownups or as parents are complicit with that chilly Story Teller in capturing them and preserving them unchanged.  How happy is their happily ever after?

Feature by Samantha Picthel at austinist.com including interview and photos, March 26

Review by Elizabeth Cobbe for the Austin Chronicle, March 31 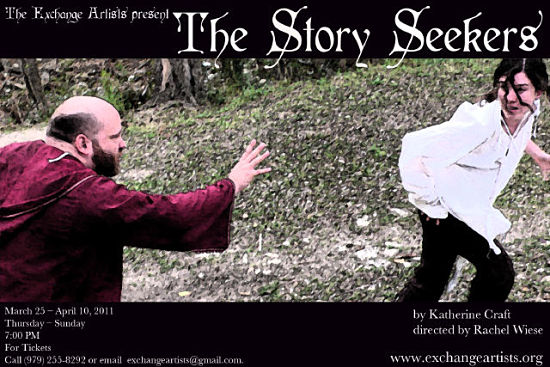