Review: The Dream (adapted from A Midsummer Night's Dream) by Austin Shakespeare
by Michael Meigs

This is Shakespeare for a summery night in Zilker Park.  The slope above the Hillside Theatre is wide and gentle, the perfect place to sprawl out on a blanket as the stars come out, the players play, the music sounds, and the action flits before you.

A Midsummer Night's Dream is a favorite, in part because it is sweet and not particularly demanding.  Shakespeare runs masques with the Duke's court, with the fairy court, with the clownish tradesmen and with the ever-so-earnest and therefore inevitably comic young lovers.  Add a few portions of fairy juice, feature Puck for mischief, and transform the braggart clown into an ass, and what's not to like?

Ann Ciccolella enlisted Michael McKelvey to do up The Dream with 1960's style music, and that, too, offers an Austiny bit of odd retro flair, kind of like those 1960s rock shows that the Zach keeps putting on, year after year. 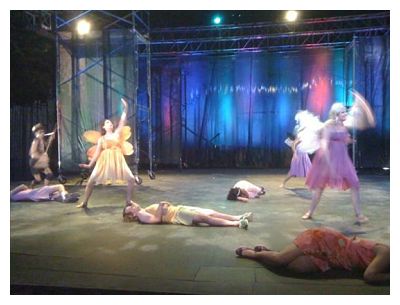 Why the 1960s?  That's not really clear.  The company is doing A Midsummer Night's Dream, without much effort to reflect any of the Summers of Peace and Love. McKelvey's pieces are usually interval music and most of the time they drop into the action as he'd dialed them up on a car radio.  In contrast, a couple of apt and clever bits are his cheery, whistling theme music for the rude mechanicals and the thrumming theme for the fairies' dance as they're getting the forest ready for the final scenes. 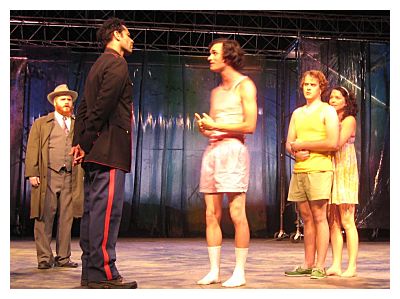 Does anyone need a recap?  Dramaturg Cristina Gutierrez provides an erudite page of commentary in the program and another of glossary, but you're not going to want to go all scholarly on  a lazy evening.  See, Duke Theseus and his lady Hippolyta are going to be married soon.  Four young lovers run away to the forest, where their emotions get muddled by fairy meddling.  Six funny town menials are rehearsing an impossibly erudite play that they hope to present at the Duke's wedding.  Puck transforms their chief into a donkey and makes Fairy Queen Titania fall in love with the donkey.  King of the fairies Oberon enjoys all this but directs Puck and company to end the foolishness -- showing himself a more effective ruler than Theseus.  And then we all get to attend the richly comic presentation by the town menials.

Jennifer Madison's costumes for the fairies are fun.  I was a bit disconcerted to see Duke Theseus wearing a Marine dress uniform without insignia, but I guess that was all right.  The young lovers were appropriately foolish, cast, clad and played to look as if they were teens in need of a few more years to figure themselves out. 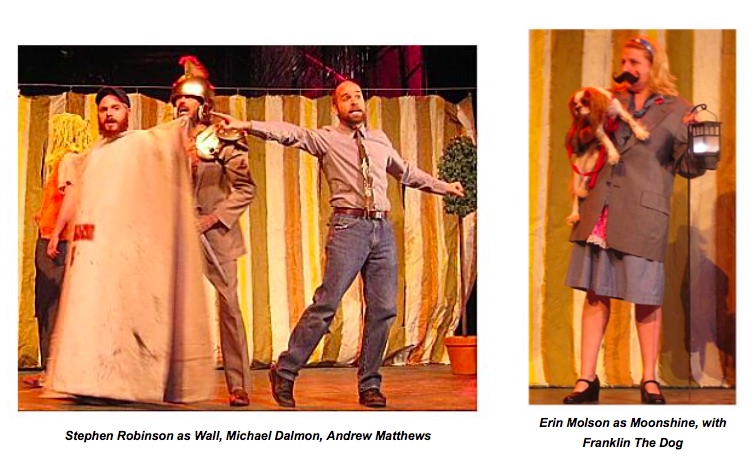 The crowd of rude mechanicals was lively and amusing. With Ann Ciccolella's re-jiggering of their professions and Madison's campy costumes, they struck me as somehow strangely familiar. It wasn't until a big dance preceding the finale, when they came on doing a concentrated high-stepping dance line, that I got it: the Village People!  Right?  Or not?

Ciccolella and Austin Shakespeare recruited capable talent for The Dream.  Gwen Kelso and Jenny Larson are familiar favorites.  Michael Dalmon as Nick Bottom was a relevation to me --antic, comic and well-spoken, even if he did choose to use a Jed Clampett voice when playing Titania's favorite ass.  William Moses is a thoughtful yet playful Oberon.  Macey Mayfield has a tiny role as Moth, the fairy, but lots of stage presence and a fetching twirl.  Also catching the eye are Andrew Matthews as Peter Quince, first-time play producer, and Erin  Molson both as the roller-skating Robin Starveling and as Moonshine.  As Francis Flute, Nathaniel Lahay overcomes his mailman costume and bony knees to become a credibly comic-anguished Thisby.

The Dream is Shakespeare lite, and it presents an attractive magic world for your evening in the park.  There's no admission charge, so you're getting a whole lot more than you pay for.  When the actors come around at intermission, be generous.  These folks are fooling, but they aren't lying to you -- Austin Shakespeare needs and really appreciates everything you drop in the bucket.  My advice: forget the small change and give them some folding money.  Where else can you be entertained by a cast of 18, Franklin The Dog and a rocking 4-piece 1960s-style band?

Review by Clare Canavan for the Statesman's Austin360 "Seeing Things" blog, May 10

Review by Avimaan Syam for the Austin Chronicle, May 13

Click to read an interview with director Ann Ciccolella, published at www.theshakespearestandard.com, May 11

Click to view the program of The Dream by Austin Shakespeare 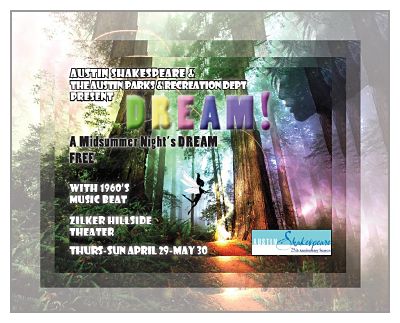