The Sam Bass Community Theatre celebrates friendship and nostalgia in The Dixie Swim Club, by that clever trio of writers who dropped out of the big time to devote themselves to crafting vehicles for community theatres.

Jessie Jones, Nicholas Hope and Jamie Wooten now have residences in Asheville NC and in New York City, according to their website. After careers in television and regional theatre, they hit gold with their 2005 North Carolina premiere of Dearly Beloved, introducing the formidable Futrelle sisters from the mythical crossroads town of Fayro, Texas. The trio's Futrelle output is now up to a trilogy, and they've branched out to further quirky Southern-flavored comedies.

The Dixie Swim Club opened in 2007 in Wilson, a mid-sized town in eastern North Carolina, halfway between the sophisticated university town of Raleigh and the beaches of the Outer Banks. It's a female Southern Comfort buddy play, portraying summer ritual beach house vacations of five university classmates over 55 years. There's a Big Chill factor at work here -- offering audience members scenes that inevitably raise memories and tug at their heartstrings. This is sure-fire heart-warming stuff. 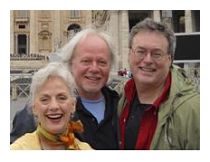 Jones, Hope and Wooten celebrate on their website the news that a version of The Dixie Swim Club will open in Melbourne, Australia, and they list -- get this -- sixty-seven stage productions currently licensed from January, 2010 through 2011, ranging in locales from Round Rock to Kalamazoo to Wetumpka, Alabama. They plan a Texas theatre tour for themselves in March of this year. 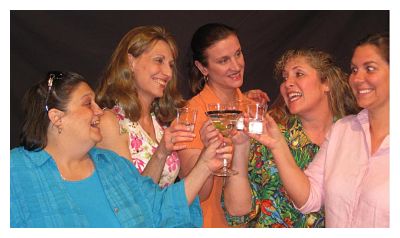 Granted, to a certain extent the play is formulaic. Your five girlfriends include an methodical and highly organized natural-food enthusiast, a man-loving free spirit whose marriages inevitably fall apart, a high-powered bachelorette lawyer, a nun who drops out of the convent to become a hassled mom, and a blue-collar mother whose kids are jail-destined hellions. Those profiles provide lots of jagged edges onto which to hang anecdotes, one-liners, surprises, quarrels and reconciliations for the five temporal way-stations for this vacationing group on its fifty-five-year journey. There's plenty of mischief, much glee and lots of laughs.

What makes this production special is that it plays to the strengths of the informal, floating company constituting the Sam Bass Community 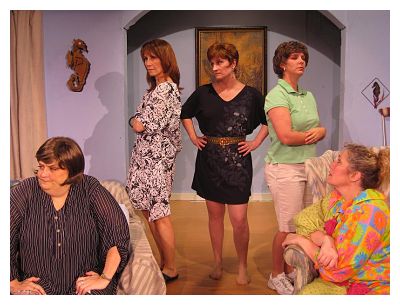 Theatre. Like the Dixie Swim Club women, these women actors resonate as a group of friends. At the core are long-time SBCT members Lynn S. Beaver as the lawyer, Jan Phillips as the man-hunter and Renee Brown as the blue-collar mom. Director Andy Brown, Renee's husband, is a stalwart at SBCT and at the Georgetown Palace. Lisa Shelton as the nun-mommy is returning to SBCT after almost a decade away. Virginia Keeley, recently at the Palace in The Odd Couple, is the only real newcomer on this tidy little stage.

Particularly poignant is Renee's portrayal in the final scene. Vernadette, that long-suffering mom, is quiet, tentative and confused. Her memory has loosened its moorings, and she is not really certain that she knows these other women who are so solicitous of her. A real heart-breaker is her self-effacing line, as her fingers pluck nervously at a non-existent blanket: "Oh, I'm sure that I've had a wonderful life. . . haven't I?"

In the program there's a "Director's Letter" from Andy Brown in which he mentions the playwrights' interest in this production. He concludes with an invitation: "So sit back, have a good laugh, and watch these five amazing women." I take that adjective "amazing" to apply not only to the characters but also, and with good reason, to the women friends who inhabit them. 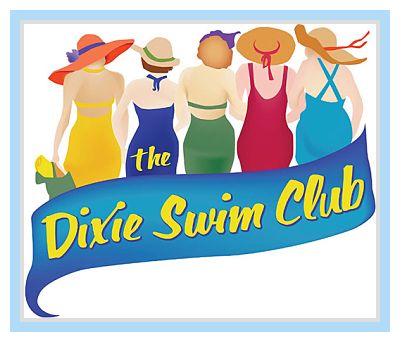