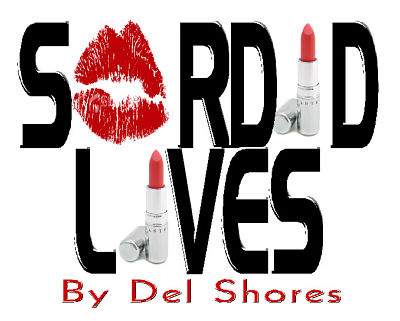 Round Rock's Sam Bass Community Theatre isn't a formal repertory company. It's a circle of players, techs and supporters who gather for six or seven productions a year in the plain playing space that was formerly a Union Pacific depot.

As you follow the Sam Bass season, you have the pleasure of seeing familiar faces reappear in new guises and disguises. They're friendly folk; the cast always gathers outside the theatre to greet their departing public. As I was driving home afterwards, there popped into my mind all unbidden the scene in which Hamlet expresses his pleasure at re-encountering the band of traveling players.

The final production of the season is set in Winters, Texas. That's a town so small that when I found it on Google Maps I had to back out twice before I could orient myself. Winters is smack dab in the middle of the state, in a largely blank area about 20 miles south of Abilene. In this presentation the inhabitants of Winters might well be considered "people of the land." That is, echoing Mel Brooks' dialogue for Gene Wilder in Blazing Saddles:  "You know -- morons."

The characters and incidents in Sordid Lives are ridiculous but very funny. We in the audience laugh with good heart at small-town dumbness, morality and immorality -- in fact, with a certain proprietary affection. We're in Texas and we know those stereotypes, folks who are the focus of many a joke.

This is a revenge play. Shores acknowledges that he grew up in the mercilessly parodied town of Winters. 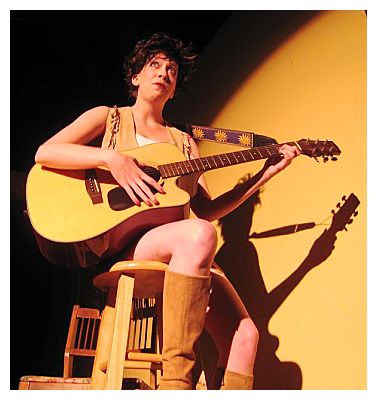 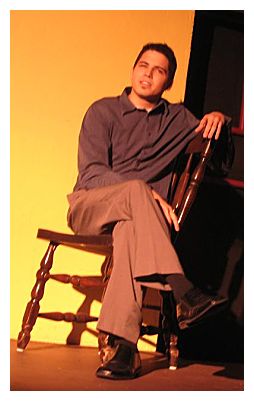 The announced date of the action is July 24-25, 1998. After Amy Lewis's dead-pan low-quality Dolly Partonesque musical intro, Shores gives us the sombre, handsome young Ty, a closeted gay actor in New York free-associating with his 27th therapist in three years. Ty is wrestling with his Winters origins and whether to risk his job in the cast of a televised soap opera by revealing his homosexuality. From there, the action shifts to Winters.

Shores paints a really bizarre picture of those small town folks -- they're not genetic degenerates so much as full-blown natural idiots. Initially, a pair of goofy sisters who are quarreling over whether to bury their just-deceased Mama with or without her fox stole; their earnest, upright sister who happens to be actor Ty's mother; their nicotine-addicted aunt Sissy, whose main source of news is Cosmopolitan magazine. It turns out that Mama in her dotage had gone nymphomaniac -- in the dark in a sleazy motel she stumbled over the two disarticulated wooden legs of Vietnam Vet G.W. Nethercott, falling and bashing out her brains on the bathroom sink. 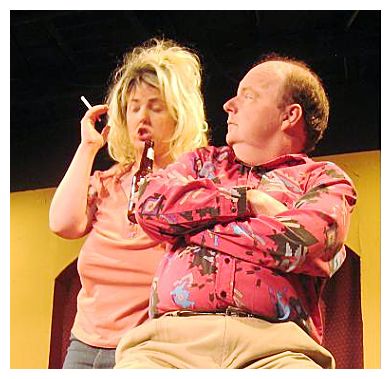 And it gets stranger. The Winters menfolk drinking in the local bar are wrapped in a fog of equal parts alcohol and stupidity. Their drinking companion Juanita is a slovenly female marvel of streaked hair and blown synapses. We learn that dead Mama packed the girls' younger brother "Brotherboy" off to the state looney bin twenty years earlier because "Brotherboy" had fallen in love with Wardell "Bubba" Owens the bartender. 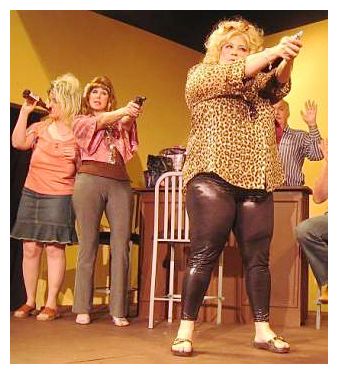 The mad sisters burst in, imagining themselves as Thelma and Louise, and they de-sex these good ol' boys by making them undress, don women's garments and wear makeup. You can see the gay playwright laying this on as thick as if with a palette knife, and you wonder how director Frank Benge can avoid a total descent into nonsense after the intermission. 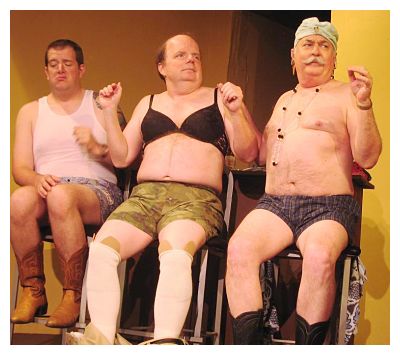 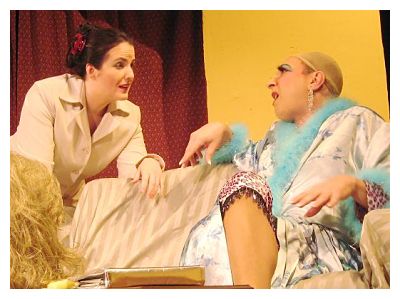 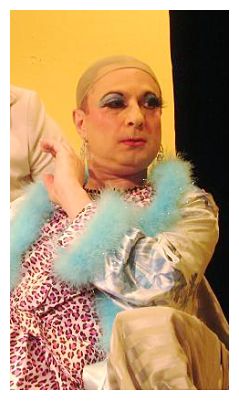 Doug LeBelle as cross-dressing "BrotherBoy" provides the expected fluttering and narcissism, provoking easy amusement, but he subtly,deftly portrays the vulnerability of his character. Tracy Medberry as Dr. Eve becomes sharper and sharper as her ambitions are frustrated. LeBelle manifests innocent delight in costume and anecdote. His plaintive reproaches ("Dr. Eve!") establish his dignity and his dismay at betrayed trust.  It's an unequal contest - - Shores wrote it that way - - but the strength of LeBell's characterisation allows us to embrace the action and the outcome.

The final scenes at the funeral home bring all the characters, threads and therapies together. In a sense and as Shores intends, we bury with Mama the hard-edged, unforgiving sexual morés of conservative Texas. Reconciliation reigns onstage. You liberals in the audience can feel good about that, and you slightly scandalized conservatives can purse your lips and shake your heads at the madness of the new world order. And we can all enjoy speculating about what on earth the Sam Bass crowd will do next. 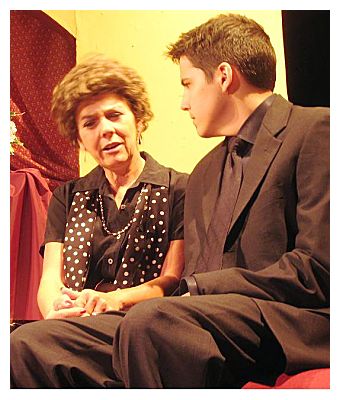 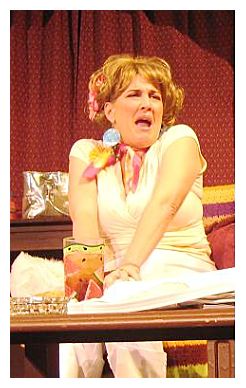 Lynn Beaver and Linda Myers as the mad sisters have a fun, wild time, far out-doing Thelma and Louise. Kathy MacKenzie as their serious sibling stays in a quiet, intense fret until the dénouement and the satisfying conciliation with Shane Allen as Ty (credible and thoughtful in his function as the surrogate for the playwright). Christina Little Manley as Sissy, center of womanly commiseration in Winters, is loud, brash and funny - - similar to her Honey Rae in Christmas Belles.

Bravo for Tracy Medberry, who proves in her double role the impact of focus. . . as Juanita she is distracted, funny and fuzzy, while as the evil Dr. Eve she is so concentrated that we don't realize until afterwards that the same actress is at work here.

The guy actors tempt one to say that appearing stupid is no work at all : we enjoy Craig Kanne as the legless Vietnam vet wonder, Gene Storie as the sparkle-eyed barkeep still in love with "BrotherBoy" and David Dunlap as the simpleton wrapped up in stupid stories and tricks with twine. 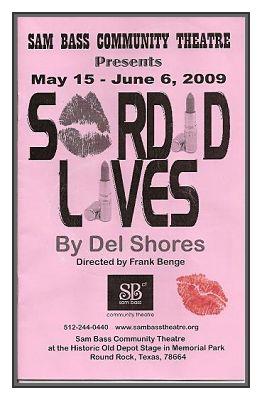