I am a bookish sort of person -- not fiercely literary, but more inclined to take my reference points from a printed page than from a screen.  I was aware of C.S. Lewis because my daughter and son had absorbed the Narnia books and because back in my own school days I had wrestled a bit with The Screwtape Letters, but I had not much more knowledge of him than that.  When this piece came along, I was vaguely bothered by the mentions of a 1993 film that I had never seen.  Our years of living abroad had hindered the acquisition of many of the video memories floating in the national consciousness, including those of Richard Attenborough's cinematic version with Anthony Hopkins in the central role.

So Karen and I were completely vulnerable to this powerful, calculated piece about the pottering Cambridge don serenely lost in his books, gab-fests with academic fellows, and his own imaginings.  Jose Schenkner as C.S. Lewis vividly creates that late-middle-aged bachelor, thoughtful and contained, and brings us into his crisis of love and religion as if we were members of the Inklings, the tweedy bunch that met every week to grumble, gossip and discuss. 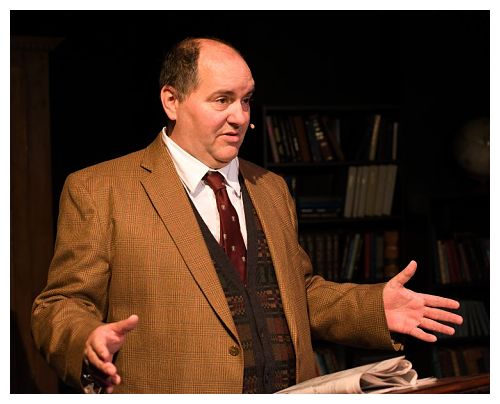 Director David McCullars makes sure that we know the story that we're getting into, even those of us not already set up by the film.  The program outlines the facts in a page of discursive biography, and on the back page McCullars muses about his exposure to Lewis, both to the works and to the man's history.  Shadowlands situates us in the shabbily genteel world of Lewis, the inveterate bachelor who shared a house with his brother Warnie, then brings on board Linda Miller Raff as Joy Gresham, the American woman estranged from her own novelist husband and in search of some guiding insights above and beyond those offered by Lewis in his books.  As Nicholson tells the story, Gresham eventually became the friend and force who reconnected Lewis to his own emotional life. 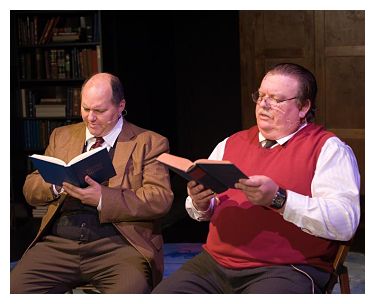 It's a hard story.  Hard in the sense that it deals with opening a protective shell, disturbing a life, and subjecting the author of the 1940 essay The Problem of Pain to the sharp edges of loving and then losing the loved one.   After years of correspondence and friendship, Lewis married Gresham virtually in secret to provide her with derivative UK residence status.  That sham marriage gradually transformed itself into a real and intimate relationship, tested by Joy's bone cancer and lengthy illness.

After pondering at length the Anglican doctrine opposing remarriage of divorced persons such as Gresham, Lewis found justification more Jesuitical than Anglican and enlisted a visiting clergyman willing to perform the ceremony in the hospital.  During a near-miraculous period of remission the two lived an almost normal life in England and Joy persuaded the resolutely sedentary Lewis to take her on holiday to the sun of Greece.  After three years she relapsed and died. 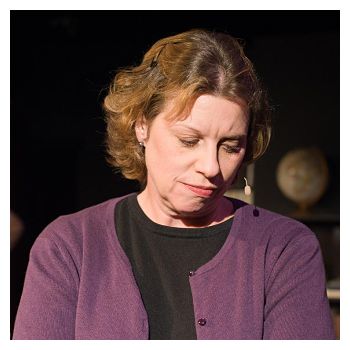 Told ineptly or with the wrong emphasis, that story could have been appallingly bathetic.  Meeting in middle life, they fell in love. Cruel fate -- or God --  gave them an idyll and then separated them forever, killing one and crushing the other. 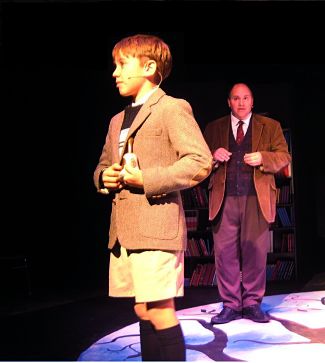 The strength of this telling and of this staging is that Nicholson draws on Lewis' own work, either literally or in paraphrase, to draw a firm portrait of the man and his precisely guarded emotions.  Shenkner and director McCullars make Lewis -- "Jack" to his friends -- a man with the strength of full-grown intellect and the emotional simplicity of a boy.

Lewis feels the keen edge of the pain and works to understand it, returning repeatedly to the striking image of God as a sculptor with a chisel, inflicting blows that shape us through pain.  Nicholson's text has the virtue of not offering easy answers.  He does, however, find it necessary to wrap the ending in a spiritual reunion and a Narnia-like transformation -- giving the audience an  emotional solace not experienced by C.S. Lewis himself. 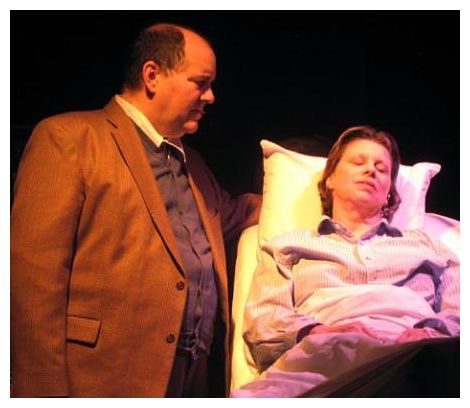 Prompted by this moving experience, I spent some time yesterday with Lewis' own notebook of that time, first published anonymously as A Grief Observed.  That record of his questions, emotions, and wrestling with death and with God sheds more light than does Nicholson upon the relationship.  Nicholson's script emphasizes the union of two sharp and combative minds; Lewis's memoir reveals in addition their deep satisfaction in mutual physical love, a discovery that made that separation even more dire for the surviving spouse.

José Shenkner is a wonder in this role, particularly for his physical control of the character while delivering a complex, layered emotional portrayal.  Linda Miller Rath creates Gresham with sharp tongue and acute sensibilities.  The two play superbly against and with one another. 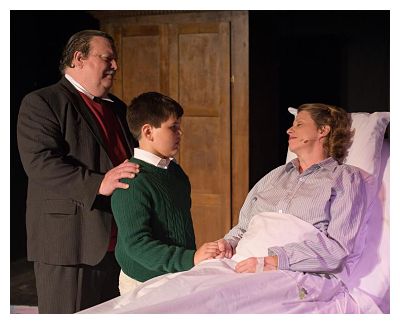 The story and text speak eloquently in this intimate black box theatre, so I found mystifying the decision to equip all of these players with obtrusive microphones.  At no moment in this action is any of them more than twenty feet away from the audience. I would have accepted without quibble a dropped utterance from some lesser player if these 1950's characters had been allowed to shed the electronic gear that gave them the momentary appearance of call-center operators.  Just as inexplicable was the choice of contemporary pop ballads as music before the curtain time and at the interval.

But see for yourself; let yourself be challenged and stretched.  Perhaps you, also, will be drawn to Jack's thoughts and his examination of the difficulties and rewards of Christian faith.

Review by Ann Pittman on her blog aNN pITTMAN, November 7

Feature by Katie Stroh for the Daily Texan, November 10

Click to view the program for Shadowlands by William Nicholson by the Trinity Street Players of First Baptist Church (part 1; part 2) 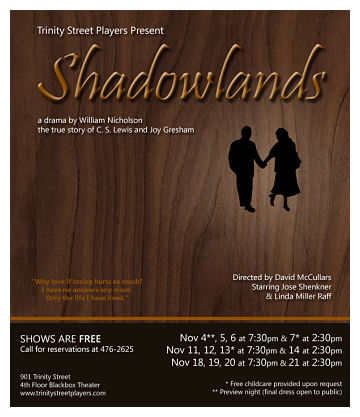