Psycho Beach Party is Charles Busch’s parody of California surfer culture, and, more particularly, surf movies.  And there’s nothing like a sunny, open beach for a horror/mystery story, right?  If you think this approach is slightly bent, then you get Charles Busch, and welcome to his world of playwriting and theatre.  City Theatre, led by Andy Berkovsky, really gets it, and treats Psycho Beach Party just right.  Their production is hilarious, and in this reviewer’s opinion, City Theatre has topped itself, turning in a funnier presentation than its own recent SRO smash hit The Odd Couple by Neil Simon.

The play is set deliberately on Malibu Beach in 1962, a period piece from the git-go.  The cast and crew picked up beautifully the costumes, hairstyles, lingo and inflections of early 60s surf culture.  This is no mean feat for a cast that hadn’t been born yet.  Dan Dalbout as surfer god Kanaka was especially adroit with the surfer idiom in all its physical, verbal and mental dimensions.

The set was semi-Tiki bar, having everything but the stone idols, and it conveyed perfectly the tone of quasi-cheesiness of Frankie’s and Annette’s beach party movies.  From here it was one step to eye-rolling, over the top camp, splashing on the audience like waves on the beach.  The lighting design followed the needs of the story; the glaring light of day was set off by the relieving cool tones of beach bungalows and all-night luaus. This design transcended the limitations of the electrical system in the shopping center where City Theatre is located.  Great credit goes to production designer Andy Berkovsky for creating impressive art in the design fields of set and lighting.

Credit as great goes to the youthful cast who performed well as a true ensemble.  Ronnie Williams performed yeoman work in the central role of Chicklet and multiple character roles.  Max Torrez played Star Cat and readily conveyed the dilemma of Star Cat’s dichotomous desires: whether to spend his youth reveling in the joys of the surfer bum or to pursue the higher calling of going to med school and becoming a psychiatrist.  Jordan Maranto as Marvel Ann was a very bad girl indeed.

Kelly Sardinas played Chicklet’s best friend Berdine.  In writing to her diary, Berdine gave précis of Schopenhauer, Kierkegaard, Sartre, and Nietzsche; no doubt she could have summarized others.

The crypto-erudite character of Berdine reveals the wicked intelligence of Busch’s play.  The work is campy and full of low-brow humor, and outwardly it holds that youth is to be enjoyed to the full; it lacks any recognized awareness of Wilde’s dictum that “youth is wasted on the young.”  The darker subtext, on the other hand, is that adults, those the young are becoming, still can’t be trusted.  And beyond that, the real Nemesis of youth is conventionality.  Of course, no one can escape that peculiar form of death.

The play is short, and City Theatre revs up the powerful engines of its cast and power surfs through Psycho Beach Party’s multitude of laughs.  The show is another one for the must-see list, for everyone ages 13 and up.  Austin is full of excellent theatre this summer, one should see as much of it as possible. 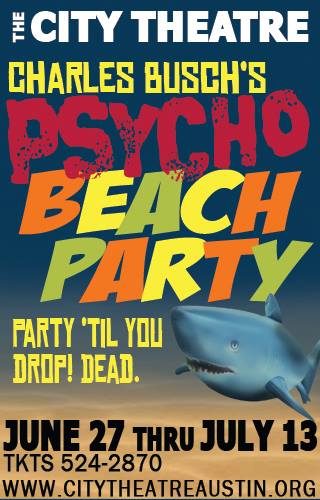