Review: Measure for Measure by Austin Shakespeare
by Michael Meigs

Austin Shakespeare's Measure for Measure can offer you a good time. It has a dramatic intrigue, lots of clowning, a clever time-warp setting in Savannah, Georgia of the 1920s and a cast that I'd be happy to put up against any other American Shakespeare company out there.

At the same time that he's entertaining us, Shakespeare is working some much deeper themes. These include the responsibility of authority; chastity, promiscuity, desire and disease; the role of the state in policing behavior; the arrogance of office and the equally reprehensible pride that may attend self-righteous virtue.

Summarizing all in a lengthy phrase,  Measure for Measure deals with the folly of the pursuit of fleeting pleasure and the difficulty of making virtuous preparation for inevitable death.

You don't have to take it that way, of course. The highly positive comments posted to date at NowPlayingAustin.com are all over the place, but each of the five ratings is for the maximum five stars.

Director Ann Ciccolella and the cast substitute Savannah for the Shakespeare's Vienna, which was imaginary, in any case, and their molasses Georgia accents give the words of this generally unfamiliar text further exotic tang. For that double distilled concoction -- Elizabethan text to Savannah speech -- you can expect your inner ear to take longer than usual to tune in. The clear diction of their wondrous speech helps. 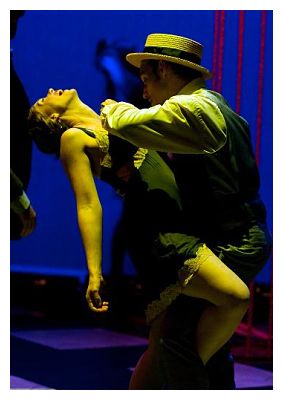 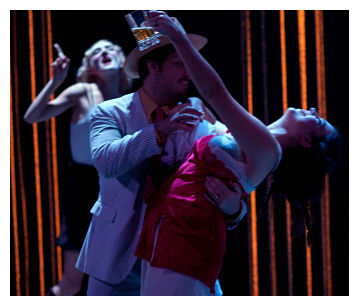 The opening is a quick glimpse into a late night dive, with hectic ragtime music accompanying jazz babies and half-clad clients dancing in colored spotlights. That wordless surging tableau clears away and we find the Duke, Savannah's ruler, with cardboard suitcase packed, informing Escalus his senior advisor that he's conferring full acting authority over all, life and death, to the irreproachable Angelo. The town has lived wild with lax application of the laws for at least fourteen years, and the public-shunning Duke is absenting himself so another can clean up the town.

Jason Amato's set is minimalist but evocative, as might be expected of an accomplished lighting designer. The middle space in the Rollins Theatre is defined by a pattern of large white squares, while ropes stretched vertically at the rear create a pattern of columns that might be a wall or a garden or the buttresses of a towering prison.  Costumes by Abby Graf are colorful and evocative of the jazz age.

Lowlifes of the town entertain us with banter until we hear that Angelo's clean sweep has netted Claudio, scion of the gentility, for the crime of fornication. Because Claudio has knocked up his fiancée Juliet, acting governor Angelo condemns him to death, following the law to the letter.

Claudio's sister Isabella is about to join a convent. Urged on by Claudio's friend Lucio, a "fantastic," she calls on the acting governor to plead for a pardon. The more Angelo insists on exacting justice, the more he is tempted by the eloquence and purity of Isabella. Eventually he offers a deal -- if virgin Isabella agrees to come to his bed, Claudio may hope for a pardon. 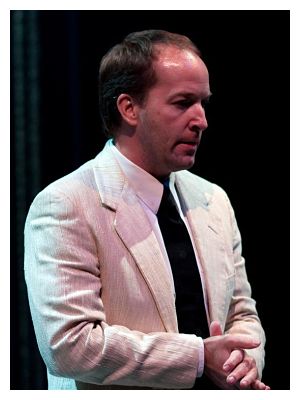 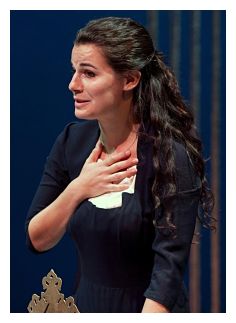 Isabella is appalled. She rejects "such abhorr'd pollution":

"More than our brother is our chastity.
I'll tell him yet of Angelo's request,
And fit his mind to death, for his soul's rest."

And yet, and yet . . .we the audience see that the Duke has not disappeared to Poland or Russia, as is commonly given out, but is, instead, garbed as a prison chaplain and is watching developments under the tenure of the new interim government.

Measure for Measure posits for us the eternal conundrum of laws and justice. The Duke's regime has been benevolent but neglectful; Angelo's determination is to exercise the laws to their terrible fullness. The Duke's administration was "soggy," assuring a situation of comfortable uncertainty, to use the terms of Nico Colchester's widely quoted 1996 essay in The Economist, and Angelo's administration will be "crunchy. " ("Crunchy systems are those in which small changes have big effects, leaving those affected by them in no doubt whether they are up or down, rich or broke, winning or losing, dead or alive.")

With these characters Shakespeare examines closely the nature of temptation, will, and guilt, turning them to show the vulnerability of even the most virtuous. Shelby Davenport as Angelo the acting governor delivers a nuanced portrait of a man confident in his own virtue but gradually and inevitably appalled to find himself a prey to lust and the intoxications of power. 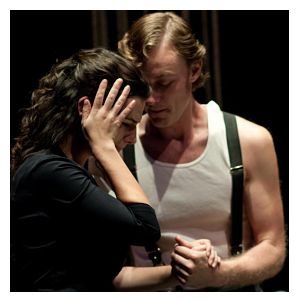 Morgan Dover-Pearl as the gallant Isabella asserts an equally emphatic moral view; she is crystal-certain of herself when advocating her case with the perfidious Angelo, with her confused and despairing brother Claudio (Collin Bork) and with the Duke upon his return. Bork gives us a gripping moment when Claudio senses that he might escape the fearful unknowns of death but then is crushed by his sister's moral certainty. Eventually, Isabella will  face a comeuppance and find a new humility in a trap laid by the Duke. 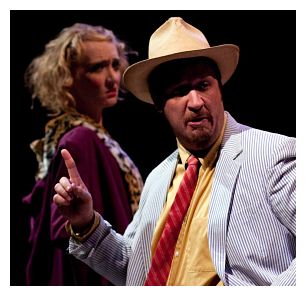 The clowns in this piece are familiar and welcome faces. Manic Jenny Gravenstein as Mistress Overdone the bawd is loose limbed, lowering and comic. Robert Matney as Pompey Bum (!) the tapster/procurer has the cocky eloquence of an accomplished sea-lawyer. With pratfalls, prevarications and fast talk he manages to convert his trade in those parlous times from assistant brothel keeper to assistant hangman, taking delight in both professions. 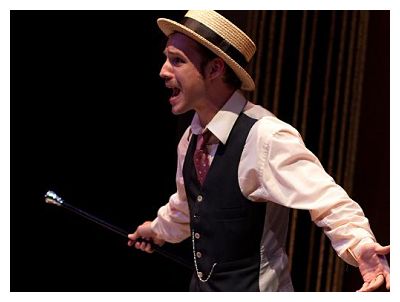 Justin Scalise as Lucio the "fantastic" has a good heart but a loose tongue and astonishingly poor judgment, for which he eventually takes the fall in the last act. Scalise's timing is terrific, whether coaching Isabella in her peroration to Angelo, fabricating tales to the disguised Duke or inserting himself in the big resolution scene at the end. He's the Everyman of the piece, the citizen who takes every inch of liberty accorded and then some.

Harvey Guion as the pained elder counselor Escalus is deferential to the determined Angelo, for he's a man without recourse.  Guion has a tart justice-of-the-peace demeanor with reprobates and he is swift to respond to class ties when foppish Froth (Alejandro McDonald-Villareal) is before the bench. 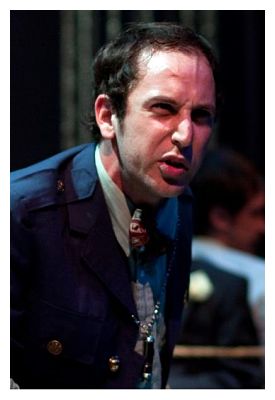 Each additional mechanical is fit to the piece: Michael Amendola both as Elbow the dim-witted constable and as the greatly belching prisoner Barnadine; Abby Jones as the penitent, pregnant Juliet; Sean Dornan-Fish as Abhorson the executioner; and Catlin Uhlig as Mariana, upon whose complicity turns the final dénouement.

David J. Boss as the prison master Provost shows a seriousness and moral resolve that raises the character above a mere plot contrivance. 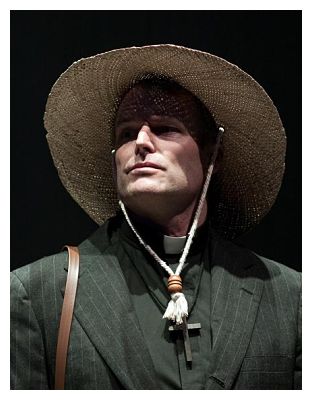 The Duke, Vincentio, carries this play. Last year in his new book University of Chicago distinguished professor David Bevington commented, "The Duke is the embodiment of theatrical contriving. He does what the dramatist does: from behind the scenes he moves his characters about, putting them at risk, testing them, while at the same time taking care in a comedy that they are spared from irreparable harm. He deceives them to see how they will behave under the supposed circumstances in which they find themselves, just as the playwright fills his stage with characters who are crucially unaware of matters about which we as audience are informed."

In other words, without the Duke there would be no play and no revelations.

Matt Radford as Duke Vincentio establishes himself from the first moments as solid, serious and learned, a middle-aged gentleman of the old school. We enjoy his initiation into his disguise as clergyman, including a certain awkwardness of gesture and his shift of accent.

His advice to the condemned echoes his convictions from years of study, concerning the futility of much we pursue. Speaking to the imprisoned Claudio, he admonishes, in part,

. . . . Thou hast nor youth, nor age,
But as it were an after-dinner's sleep
Dreaming on both; for all thy blessed youth
Becomes as aged, and doth beg the alms
Of palsied eld; and when thou art old and rich,
Thou has neither heat, affection, limb, nor beauty
To make they riches pleasant. What's yet in this
That bears the name of life? Yet in this life
Lie hid moe thousand deaths; yet death we fear
That makes these odds all even.

Radford has the assurance and learned aspect of a duke. His deceptions are calculated to provide demonstrations and lessons. In the final scene he orchestrates revelations, punishments, obligatory marriages, and a mercy for all. It's an artificially tidy solution, in which only Lucio the fantastic suffers an indignity (marriage to a harlot -- although he does escape both whipping and hanging).

Shakespeare's sardonic joke on Vienna (here, Savannah) is that though all is changed, nothing has changed. Angelo's administration of crunchiness fails, due not only to his own weakness, but also to that of the Duke. The abrupt finish leaves the characters once again in a world of soggy, enigmatic standards. We do not even know if the much surprised Isabella will consent to the proposal of marriage sprung upon her at the last minute by the Duke.

Measure for Measure offers you entertainment according to your own measure. You can revel in the comedy, in the language, in the themes or in the grace of these players. After every performance, director Ann Ciccolella and the cast gather for a ten-minute exchange with anyone who cares to linger.

At PlayShakespeare.com, a version of this review: Dark Matters in 1920s Savannah, September 18

review by Olin Meadows at AustinOnStage.com, September 15 "A must see for everyone in Austin . . .  5 out of 5 stars."

review by Robert Faires at the Austin Chronicle, September 17

Click to view program of Measure for Measure by Austin Shakespeare 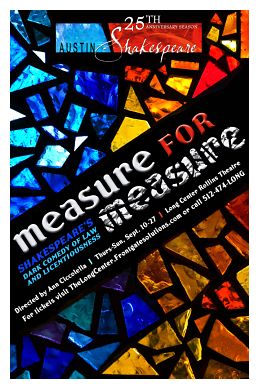