Robert Faires' imaginative staging of Love's Labor's Lost takes place at the Sheffield Hillside Theatre in Zilker Park, literally a stone's throw away from Barton Springs pool. Spectators spread out blankets or set up lawn chairs in the sloped meadow above the playing area and settle in for the pleasures of free entertainment for a Texas evening in May.

Love's Labor's Lost is one of Shakespeare's earliest comedies and not one of the world's favorites.  The language is rich and strange, certainly to a contemporary ear, with lots of quibbles, puns, and references that might have knocked 'em over back in the late 1500's but today come across as dense and obscure.

The concept seemed to be a stretch.  How were director Faires and that energetic young cast going to fit the King of Navarre, the Princess of France, fantastical Spaniard Don Adriano de Armado and sundry counselors and ladies in waiting into an Annette Funicello-Frankie Avalon 1963 beach blanket bingo world?

Having made his reputation with the histories of Henry VI and Richard III, Shakespeare was drawing on events of recent history for this lighthearted comedy.  He was parodying Henri of Navarre, a contemporary and an English ally in the religious wars until Henri abruptly converted to Catholicism in 1593, shortly before Shakespeare wrote this piece.  Henri was reported to be of an intellectual turn of mind and he had received visits from a French princess and the French queen, celebrated with festivities and entertainments. References to other current topics and events are frequent.  Shakespeare's characters both noble and common obsess with words and elaborate wordplay. 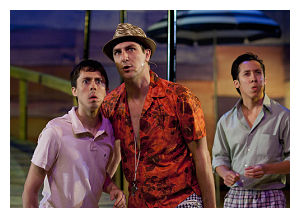 In Love's Labor's Lost King Frederic of Navarre has enlisted his three counselors to dedicate themselves with him to study and asceticism for three years, foreswearing the company of women during all that time.  Of the three -- all of whom bear names drawn from accounts of court life in Navarre -- only Berowne questions the undertaking. The king and his fellows persuade him to sign the formal oath. Their good intentions are immediately undermined by the visit of the Princess of France and her mostly female retinue. Much of the play involves the men's initially surreptitious courting of the lovely visitors.  Shakespeare breaks up that silliness with other comic figures -- the Spanish knight of grotesquely orotund phrasing, the knight's comical juvenile sidekick, schoolmaster Holofernes of almost incomprehensible erudition, the randy swain Costard arrested by Constable Anthony Dim, and other rustics.

After considerable dithering, the counselors and the king confess to one another their neglect of the oath.  They disguise themselves as bearded Russians to flirt with the women visitors but the women with their own disguises mock their artificially hirsute courtiers.  Identities are eventually revealed, but before the dances of romance can begin in earnest, the princess is called back to her court.

Faires has worked some magic with this staging.  Love's Labor's Lost was for its first audiences a comic portrayal of recent history with in-jokes scattered about the script.  Faires modifies the language virtually not at all -- instead of being lodged in a "field," the Princess and her company are lodged on a "beach," and my ear may have caught the word "deck" used for court at one point.  The director serves up pop-culture references in the music and in the movement that work an effect of amused recognition on the 21st century audience.  A summertime radio soundtrack precedes the action; the first music heard is "Wipeout" by the Ventures. 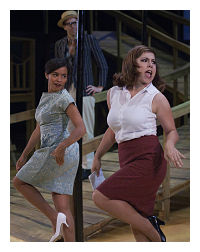 The princess's women do a saucy Shirelles dance step when teasing the men, and her counselor Boyet delivers some of his lines in credible imitation of Frank Sinatra grooving before the big band at the Sands (but mostly drowned out by the recorded music). The Spanish knight does a long bossa-nova entrance down the boardwalk, and James Bond music punctuates the Russian sequence.   The concluding songs about spring ("When daisies pied and violets blue. . . ") and winter ("When icicles hang by the wall,/ and Dick the shepherd blows his nail. . . .") are warbled with guitar accompaniment to the tune of the Bob Dylan/Byrds' "I Was So Much Older Then" ("My Back Pages").  Costumes are eye-catching and comic in themselves, from the Jackie K outfits to the 60's bathing suits to the gaudy beach shirts of the surfer guys, and the beach setting is ornamented with a sweeping boardwalk and colorful striped tents for bathers.

That surfboard in the poster and in the first scene is unintentionally symbolic.  Faires and his cast know that the casual audience for this free-admission Shakespeare in the park is going to be baffled by much of the language, so they establish a fast pace and a brightly kinetic acting style that keep everybody surfing on the crest of the text.  Intonation and movement tell most of the story whenever the verbal play is too complex or obscure.  Often the banter flies so swiftly that anyone not having read the play can capture the rhymes and the rhythm but not a great deal of the wit -- in fact, at times, not a great deal of the meaning, either.

Those who do have some familiarity with the text will be pleased by the crisp enunciation and appropriate interpretation, but they'll long for a button somewhere that could slow the phrasing down by 20% or so. For example,  Mark Scheibmeier as the cynical wit Berowne gets the task in IV, 3 of providing  rhetorical justification for abandoning the oath of asceticism ("some salve for perjury," urges his buddy Dumain). Berowne's 75 lines of blank verse are as densely conceptual as Shakespeare's sonnets, written at about the same time.  They conclude,"Let us once lose our oaths to find ourselves,/Or else we lose ourselves to keep our oaths./  It is religion to be thus foresworn;/ For charity itself fulfils the law;/ And who can sever love from charity?"  Scheibmeier delivers this speech so quickly and vigorously that the message we retain is little more than Berowne's opening line ("Have at you then, affection's men-at-arms") and the King's response to the speech ("Saint Cupid, then! and soldiers, to the field!") 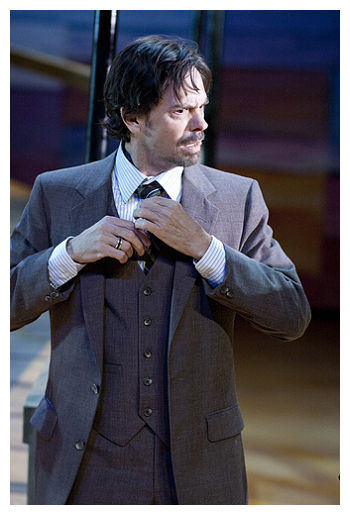 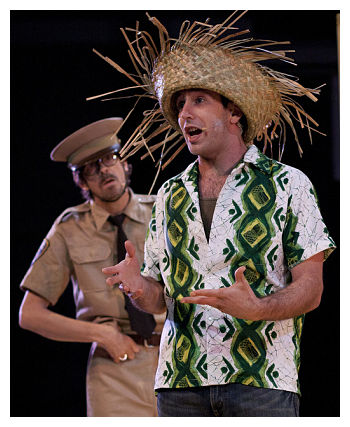 Scheibmeier, a 2010 MFA graduate in theatre from the University of Texas, returned from Los Angeles to take this role.  Like him, almost everyone cavorting on stage in this cast of fourteen players has appeared before for Austin Shakespeare or in other quality local productions of Shakespeare.  They know what they're doing and under Faires' guidance they do it extremely well.  Nancy Eyermann, a newcomer in Austin, has a particularly appealing self assurance as the princess.

My favorites are the clowns and rustics.  Faires splits the role of Anthony Dull in two, probably to take the most advantage of the droll Michael Dalmon. In the opening scene Dalmon appears as Anthony Dim the constable, a sort of tall and hairy Barney Fife; in Act V Dalmon is Holofernes the schoolmaster in a three-piece suit, intoxicated with prolixity and having drunk far too little from the Pierian spring.  In this lengthy scene Judd Farris, who plays counselor Longaville, doubles in the role of a tactiturn Anthony Dull, transformed with Harold Lloyd glasses, striped suit and straw hat, and a Mainer accent. 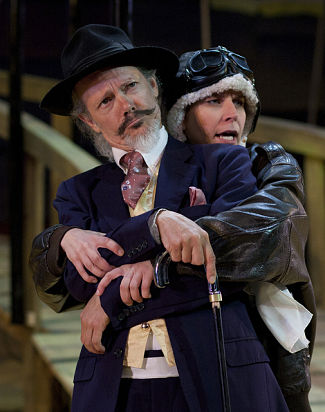 David Yeakle as the would-be-suave Spaniard don Armado and Molly Karrasch as his sprightly juvenile sidekick are clever and comic.  Faires gives Karrasch a succession of role-playing identities and she sparkles in each one.  Michael Amendola as the goofy Swain Costard plays him big and dopey, a sort of Maynard G. Krebbs on steroids.

At the intermission the cast will come bounding out of the playing area with jokes and baskets, so you'll get the chance to toss some currency in there to support the ongoing and expanding program of Austin Shakespeare.

This is a fine evening of theatre and a gift to Austin. It's colorful, funny, accomplished and Shakespeare, all together. You won't get another chance to see a full-text Love's Labor's Lost anytime soon (though Texas State University will be doing it a year from now, just down the road in San Marcos).  This review comes out at mid-run only because I gave myself the treat of going back to see it again on the second weekend.

Review by Elizabeth Cobbe for the Austin Statesman, May 12

Review by Spike Gillespie at her blog Spike Speaks, May 19

Katherine Catmull's memory piece/review of A Lie of the Mind and Love's Labor's Lost, Austin Chronicle, May 19 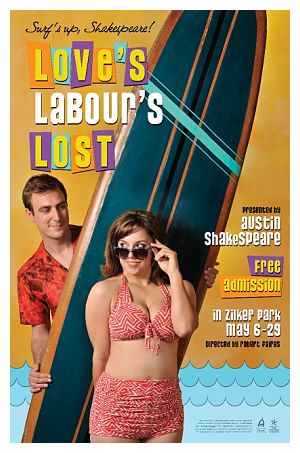