Texas State University's production of Evita lit up like fireworks last week at the year-old Patti Strickel Harrison Theatre, a palace to the arts that puts most other performing spaces in Central Texas to shame. And like a fireworks display it surged and dazzled and then in a moment was gone. There's an unfortunate inevitability to programming there by the Theatre Department and the Musical Theatre Program: despite the talent, polish and setting, their theatrical performances run for a scant week, from Tuesday to Sunday. 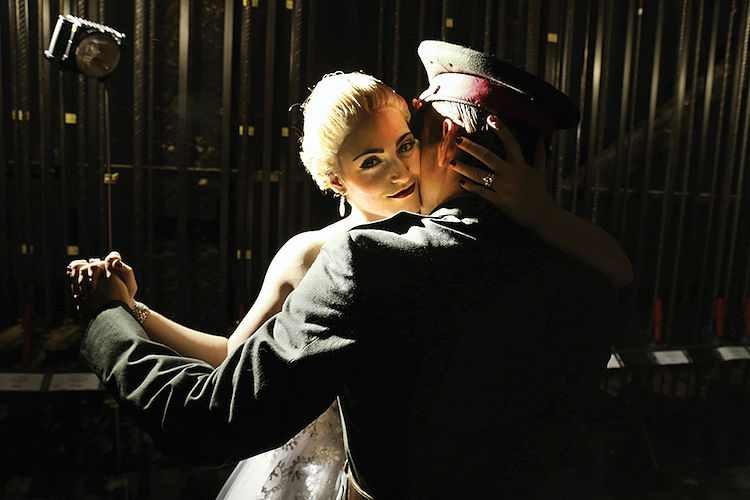 The Zach Theatre in Austin has done Evita twice: for three weeks in 2000 and four weeks this year. The Georgetown Palace's 2011 staging of Andrew Lloyd Weber's rags-to-riches opera about Argentina ran for a month, although with only three performances per weekend. The exquisite production at Texas State ran only eight performances, finishing today with a Sunday matinee and an evening performance.

The short run was due in part to the potential size of audiences in San Marcos and in part to the realities of the academic curriculum. While they're fine entertainment to outsiders, university productions are primarily learning labs for the participants. And Texas State University has impressive resources to apply, even if only for limited periods. To cite only the student participants,  Evita presented five lead performers, a twenty-two-member ensemble and a very capable twenty-piece orchestra tucked away in the pit.

Evita the musical is 37 this year, almost twice as old as most of the cast members in this production. It's a known challenge, a peak that has been charted and can be climbed, appropriate for teaching.  This staging directed by MFA in directing candidate J. Robert Moore was a traditional one, handsomely presented with support from faculty members inclulding Cassie Abate (choreography), Greg Bolin (musical direction), Cheri Prough DeVol (scenic design) and Sheila Hargood, who was capping off a 45-year career in costume design.

The audience had the pleasure of following a highly disciplined and dedicated company of students, performers with the focus and concentration of professionals. Their assurance was impressive and appeared effortless. Abate's choreography and Moore's direction filled the stage with detail, none of it extraneous. The performers made it all look so natural and spontaneous that one yearned to be able to step up there to join the celebrations and embrace the sorrows of the characters. Their public can look forward to more from them, for a quick review of the program reveals that almost none are seniors. 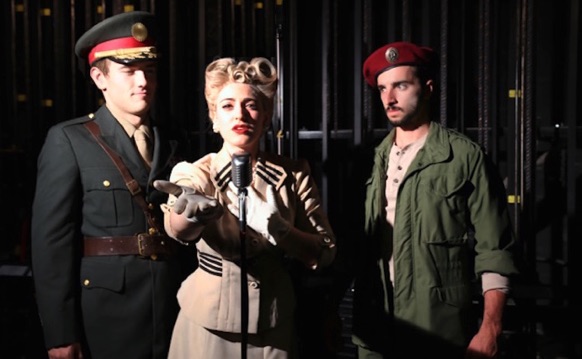 Eva Duarte de Peron's rags-to-riches story is that of a tainted Cinderella, a strong woman unafraid of using her sexuality and charisma to bend men to her will and later to enchant a desperate and poverty-stricken nation. It's a hugely powerful role in a big-shouldered musical, one that requires enormous energy in addition to gifts of acting talent, vocal ability and movement. Michaela Boissonneault has all of those in addition to strikingly expressive eyes and features.  Michael Burrell as Peron and Grayson Yockey as the tango singer Magaldi supported her ably. Ryne Nardecchia as Che, chorus and cynic, was quick and expressive but his capering and reproaches could not match Evita's mythic force.

Three small girls completely charmed the audience with their brave and distinct delivery of the hymn to 'Santa Evita.' Harper Gray Maines and the Quadri sisters Alena and Samaya received special applause as the musical number was taken up by the rest of the ensemble.

Two minor quibbles: At the second public performance both the opening and closing moments of Evita were hobbled. In the opening scene an old film featuring actress Eva Duarte abruptly stops and the cinema manager steps out to inform the audience, "Eva Peron entered immortality this evening." That's an epic announcement, one that an Argentine might be expected to deliver with the ringing pathos of a funeral oration, but the actor blurted the words and withdrew in haste. The finale seemed similarly marred by abruptness and lack of ceremony. Following a moving death scene and lament, Nardecchia as Che informs us that Evita's tomb was prepared but her body disappeared for 17 years -- and bang, that was it. The fade that followed, though quick, let us see Boissonneault bolting off the balcony in anticipation of a curtain call. It was an end without a conclusion; the audience needed a few seconds at this point to contemplate the story. I've seen another production of Evita use a projected image at that last moment. A  Spanish-language production in the Dominican Republic in 2006, steeped in Catholic tradition, even raised a gesturing Evita on high in apparent apotheosis. 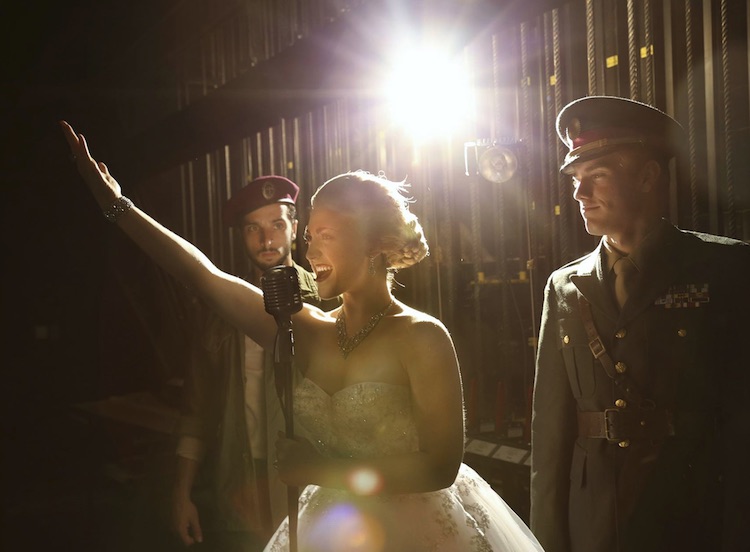 Lobby displays offered Hargett's costume sketches and a thoughtful mock-up of a newspaper article recounting Eva Peron's life, presumably prepared by dramaturg Sara Brooke Christian. Director J. Robert Moore's page of notes in the program would have been more useful if he'd done something similar, focusing more on Eva's history and the development of this musical play.

It was a fine evening. Texas State University's Evita was gripping and rich, in truth a virtually flawless production of a classic of twentieth-century musical theatre.

The opening night for Evita will be Tuesday, Nov. 17, and runs through Sunday, Nov. 22. All performances will be in the Patti Strickel Harrison Theatre. Individual tickets start at $15 for adults and $8 for students, and may be purchased by phone at 512-245-6500 or online at txstatepresents.com. 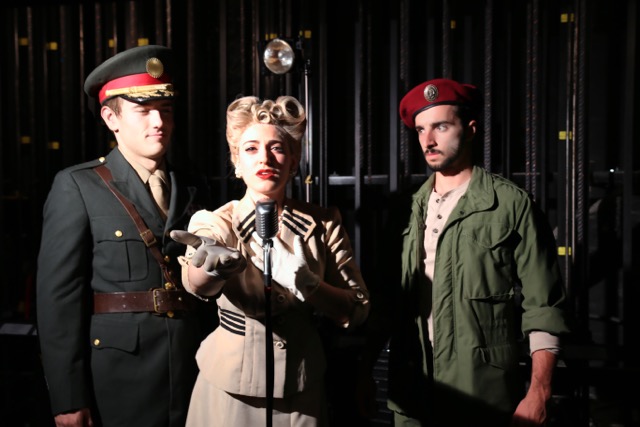