Ashes to ashes and dust to dust is the underlying metaphor in this touching play about the toughness of life during the Dust Bowl that plagued midwest America in the 1930s.
In retrospect, it was perfect that we watched Dust by Nicole Oglesby in an un-air conditioned 'pony shed' in the backyard of the booming Vortex complex (a venue featuring live theatre, food, wine, and so much more). The shack, resembling some sort of converted tool-shed-turned-black-box, created the perfect setting for a play about women during the Dust Bowl era. Accentuated by set and lighting designer Oscar Franco's large peach tree beautifully constructed seemingly from tumbleweed, and complete with "dust" on the floor poured there by patrons before the show, it was a forehead-wiping, dirty evening of stellar performances and a poetic script.
Dust practically resembled performance art. The sound of young hipsters outside drinking (and no doubt discussing Donald Trump's latest buffoonery) unintentionally juxtaposed with the actors inside who played early 20th century women wrestling with poverty, pregnancy out of wedlock, homosexuality, and folk Christianity - this was an almost surreal experience. From pre-show interactions with patrons helping create the set to intermission's dramaturge board asking for audience feedback, Heartland Theatre Collective took much care to make this communal and experiential. (Caution: a 'spoiler alert' notice should be placed on the dramaturge board because when reading it at intermission I was alerted as to what would happen during Act Two!) Plus, the venue is so small that with 18 of us on hard wooden benches lining the walls of the shed, it was impossible not to notice the impact the script, actors, and venue had on each of us. Feeling the person next to you squirm, giggle, or cry. . . watching the older woman across the room practically pass out (from the heat or content - who can say?). . . the plot line of this play or primitiveness of the venue proved to be not for the faint of heart.

But Dust will tug on the strings of your heart - which is probably the best part. It raises questions about survival, grief, history, religiosity, and even public policy. Watching the characters transition through the two-hour play was fascinating, an in-your-face (literally) experience begging an answer from the audience: What would you have done? Dust is a courageous beginning to the self-proclaimed feminist theatre troupe's first show. The Heartland Theatre Collective appears to be the product of the University of Texas' students and recent graduates. With financial support from Scriptworks' Seed Support Fund, this new work was an interesting contrast to Helldrivers of Daytona,  also a new work to come out of UT, which closed before it opened in Chicago last month due to lewdness of content and lack of critical thought.
Dust on the other hand is a thoughtful, pain-filled, and poetic take on the hardships of the dust bowl and relationships during that time period. The cast is strong (a special shout-out to Allison Wojtowecz and Molly Martinez-Collins), Nicole Oglesby's script is interesting, and it's yet another uniquely experiential night of theatre in Austin's saturated theatrical market. (I mean, we've been reduced to performing in sheds).
But don't let that scare you away from a compelling night of theatre. Dust by Nicole Oglesby, directed by Marian Kansas, is now playing at The Pony Shed at the Vortex with three performances remaining October 12-15 at 8:30 pm. To the cast, crew, and especially playwright Oglesby: here's one patron hoping this script doesn't find itself on the shelf and covered in dust.

Tickets are $15 plus service fees, available on-line via 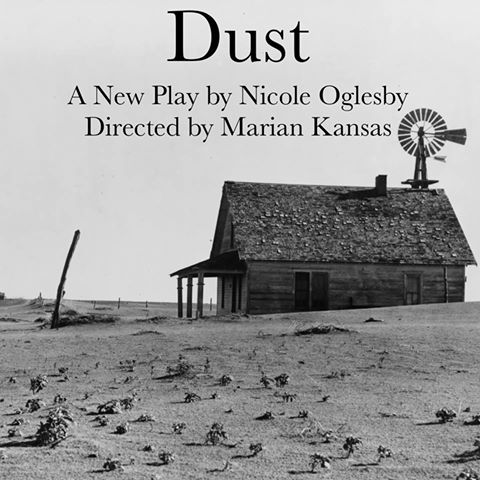