I can't hide it: I'm a card-carrying member of the patriarchy. More than 40 years into a marriage of depth and trust, father of a fiercely independent, talented and successful daughter. And a son. So while I agree that women got a right to have fun, I'm just not the intended audience for Adrienne Dawes' Denim Doves. 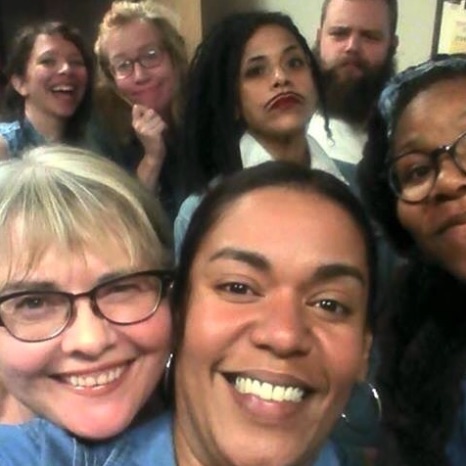 She's working on a transcendent theme -- the subjugation of women both to their biology and to those, mostly male, who would consign them without a second thought to second-class citizenship as toys, breeders, incubators, homemakers and lesser beings. I'm profoundly grateful to have lived through decades in the United States that have seen those attitudes refuted, attacked and reduced for some of the majority sex.

So there's plenty of room for creative messaging here. Unfortunately, Dawes are her girl gang (SVT's term: #girlgang) do almost the whole thing as a silly romp worthy of an unsupervised sleepover of 13-year-olds delighted to say 'penis' and 'fuck!' right out loud. 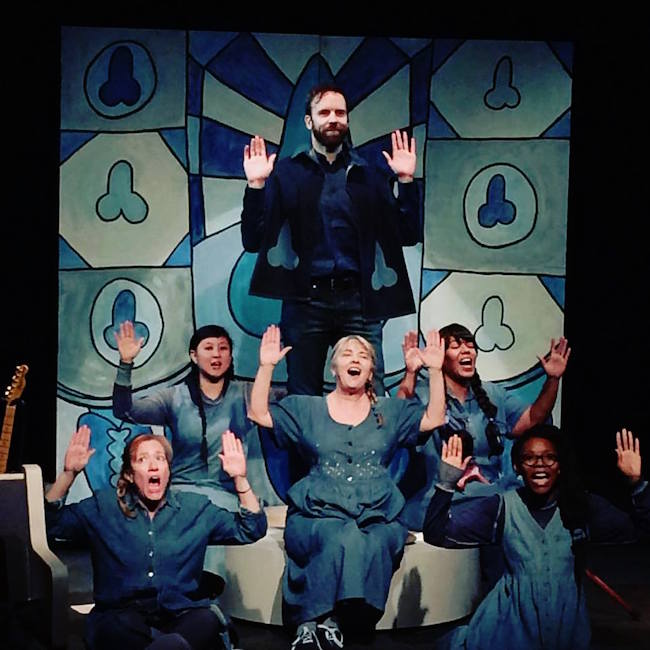 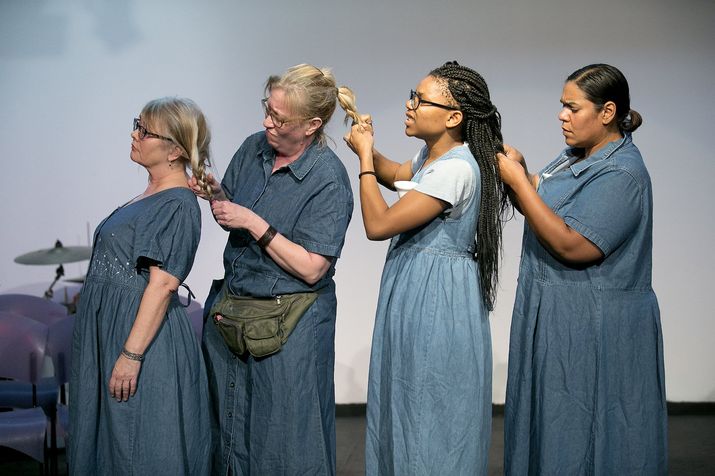 The scenario's bizarre enough for a late-night comedy sketch, although it's almost completely unexplained. A 'braid' of wives wearing denim and ranked by seniority lives in a sealed house or hive sometime in the undefined future. They worship an unseen Prophet and generative force somewhere in the unsafe spheres outside their refuge, binding themselves to Penis, the alpha male of the household. The duty, if not the pleasure, of Penis is to mate with his wives following a chanting cermony decorated with phallic symbols and rituals. But he's just too tired again tonight, wives, and besides, he's not too bright. His uncle the previous alpha male seems to have neglected Sex Ed before passing away, and bright-eyed Penis thinks that shaking hands is what transmits the seed.

The 90-minute script is about 45 minutes too long for the concept, and there's lots of filler. Individual audience members are invited onstage to participate in a ritual of dipping phallic breadsticks in grape juice, but it's no more than a cute-ass mimicking of Christian communion without the power or rapture of Bacchic ritual. There are some songs in harmony that are charming but do little before the finale to reinforce the message. Women spend the night in sleep sacks and menstruate in the same cycle, singing a dirge to blood over the washtubs.

The six Doves are assorted in appearance and ethnic origin, and we remember them more for the distinctive actresses than for the characters they're supposed to represent (wives #1 - #6 -- with Henne Chou as  #4 inexplicably unbraided and not attached either to the sisterhood or to the hermetic locale).

Judd Farris as Penis gives us a happy simpleton, managing with good cheer to retain his own personal dignity despite the belittling. Cyndi Williams as #1 is our emphatic deadpan guide to this curious world, and Jenny Larson as #6 is abrasively comic in her impatience with all this mumbo-jumbo (offspring of a family of 'super-breeders,' #6 is ready to collect that seed).  Erik Secrest as the bearded 37-year-old sole offspring engendered by this arrangement expects to live pampered and wifeless forever.

Penis apparently does connect with #6, and a child is engendered. We get some excitement toward the end with the arrival of The Prophet (or a simulacrum thereof), played by the energetic, strutting khattieQ. If I grasped it correctly, s/he's a subversive bringing news of general uprising and encouraging revolt. 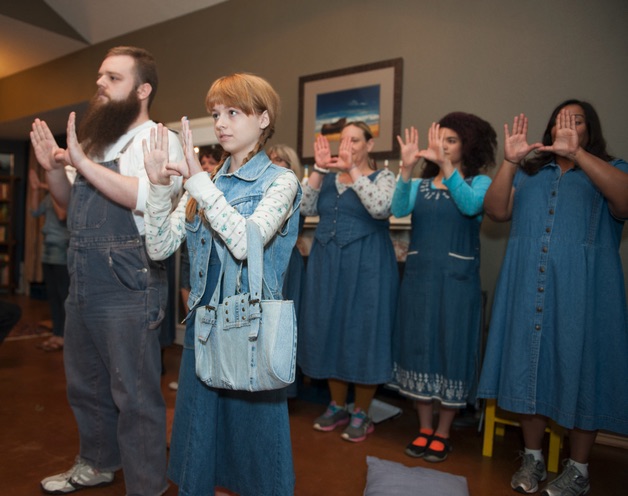 The action jumps forward several years. The finale is unexpectedly strong and moving. The Doves are initiating a solemn girl child (Renna Larson) to womanhood with song and ritual. The previous fooling around is suddenly gone; the sister wives close about her, singing and consoling this quiet creature for the thirty years of bleeding and submission in her future.

It's a sublime and tender moment.

Tickets: Pay what you wish ($10 minimum + processing fees) via BuyPlayTix at 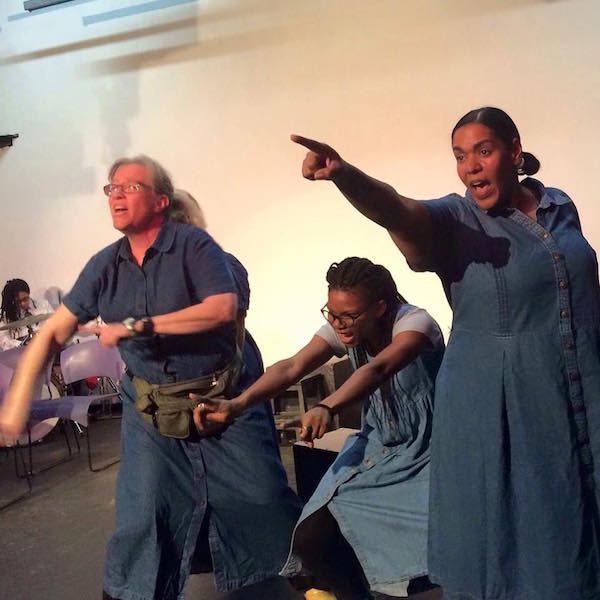 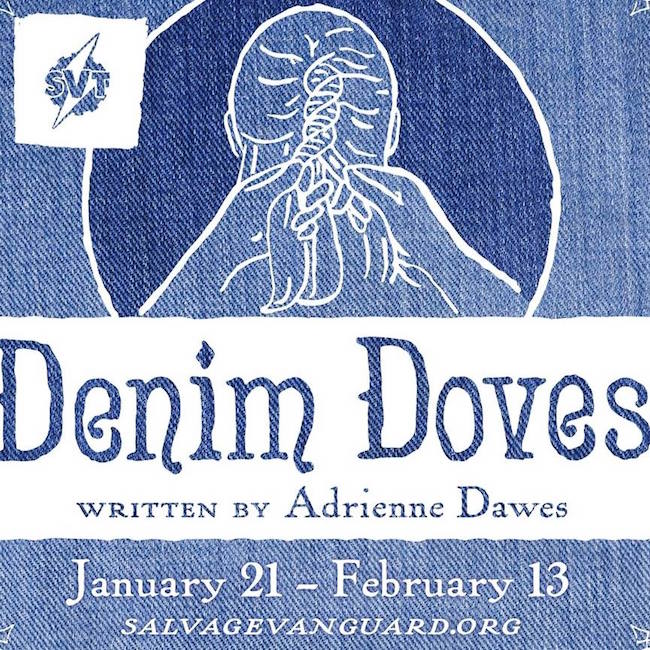