Larry Mitchell's American Bear has an undeclared kinship with the 'kitchen sink' school of drama of 1950s Britain, grim depictions of working class life pioneered by John Osborne's Look Back in Anger (curiously enough, also playing in Austin this week and next).  Sam Shepard has explored similar terrain and Tracy Letts  followed him there  with sardonic tales you might call the Grand Guignols of Trailer Park Trash.

American Bear offers a world that is more credible than those.  Mitchell's characters are from America's white underclass -- a waitress, a truck driver, and an unemployed layabout whose world is starkly delimited by the one-room set littered with beer cans and positioned between the parentheses of a senseless, ever-running television and a telephone that's the emblem of the lack of communication.  The set by Derek Kolluri is eloquently claustrophobic. 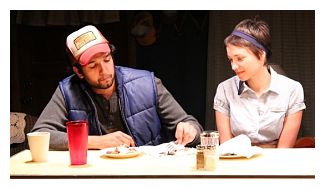 Eddie's a regular at a Memphis truck stop.  We meet this inarticulate man at the lunch counter where waitress Lonnie is wrapping the flatware in paper napkins.  The communication between them is not conversation -- it's more like random semaphore signals.  These two have seen one another again and again.  This time, however, Eddie asks her to come home to Kansas with him.  His parents have died in an automobile accident.  Without thinking about it too much, and with little to anchor her at the truck stop, Lonnie agrees.  In Kansas, Eddie's brother Jules is cocooned away on the sofa, huddled under a rumpled blanket.

Part of the fascination and, frankly, the deeply unsettling feeling prompted by this play is the experience of seeing highly intelligent actors submerge themselves into characters who are uncomprehending.  Jenny Lavery and Derek Kolluri are whip smart, I know, from having seen their work in the greater Austin area.  That confusion is intensified by the casting of Deven and Derek Kolluri, presumably brothers, as Eddie and Jules.  The experience for the watcher is like the aftermath of a communal lobotomy.

Theatre is the complicit art of watching as humans make choices, but in this piece inaction reigns.  Eddie doesn't marry Lonnie.  Instead, he resumes his truck driving life of lengthy absences, leaving Lonnie unoccupied for weeks at a time with Jules  in the squalid house his parents deeded to the absent Eddie. We know damn well what's going to happen.  And, of course, it does. 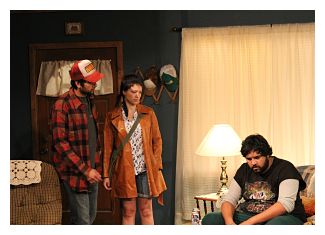 Jenny Lavery just breaks your heart.  Her Lonnie is simple, watchful, a sweet guarded thing with a tentative smile.  She does not understand what is happening, ever, and she would bloom if only someone would take her in hand and tell her what to do.  Neither of the men will do so.  They have no hope in them; Eddie doggedly drives those trucks with the diligence of a mule yoked to a wagon and Jules sucks down cheap beer, brooding without clear thoughts, numb to the world.

And yet -- there's an integrity to Mitchell's portrayal of these characters.  He neither apologizes for them nor caricatures them.  There is genuine pain and confusion in the dialogues, and the flailing fight between the brothers in the final scene, ostensibly over the ownership of a worn old baseball cap from their father, has dignity and finality.  This is not a comedy -- unless it's the human comedy, writ large, the baffling search for meaning.  Though Mitchell deliberately created anti-heroes, his piece left me stirred and uncertain, from sensing pity and fear -- the qualities that Aristotle defines as requisites for tragedy.

Review by Adam Roberts for the Austin Chronicle, December 1 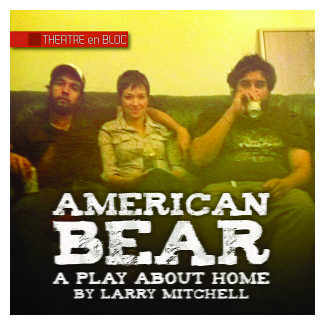