Musical theatre can fill up a space like the theatre of the new Patti Strickel Harrison Performing Arts Center with bounce, noise and spectacle, but I was concerned that the venue would be too cavernous for drama. Especially for drama as challenging as that of Tennessee Williams, that wicked old trafficker in souls in pain and search of redemption.  And there was also the simple question of age: in the glitter world of musical comedy, everyone is a perpetual twenty-year-old. It's an art of exuberance and usually of optimism, while drama often requires the stage to show characters losing more often than gaining, facing up to mortality, showing some grit and stamina.

Now that I've floated that one over the plate, I can tell you with a sense of marvel and appreciation that Texas State University's Streetcar Named Desire knocked it out of the park.

Regan Goins' performance as Blanche Dubois, that frail tissue of femininity, delusion and courage, impressed and moved me. Like many of Williams' characters, Blanche is at the end of her rope, having suffered so many losses and endured so much exploitation that her hold on reality is tenuous at best. Blanche turns up unexpectedly at the seedy New Orleans ground floor apartment of her sister Stella (Ashley Mrozek-Thurow) and her working-class husband Stanley (Danezion Mills).  Stella had escaped the duties and horrors of Belle Rive, the family's foundering plantation, while Blanche stayed and faced deaths, losses and desperation. Mrozek-Thurow has the cheerful ripeness of her real age; Blanche DuBois is in her thirties, though she won't admit it, and with her assured performance Goins makes us believe that, too.  Danezion Mills isn't a Kowalski, but once the issue of the Polish name is set aside as irrelevant, his robust physique and abrupt confidence established him as both foil and adversary to Blanche.

Robert Frost wrote in Death of a Hired Man,  "Home is where, when you go there, they have to take you in." The young couple does that for Blanche -- Stella immediately and without reserve, Stanley with suspicion and impatience. Williams pits two worlds against one another, cotillions against beery card games. He also contrasts physicality against delusion. Stanley and his pack of card-playing buddies are loud and often impatient with one another; Stanley and Stella have the vigor and battering physical passion of young marrieds. Stranded with them, Blanche drifts in memories, pretends to be on her way somewhere else, behaves with her Southern-little-girl coquettishness, that automatic learned-at-mama's-knee fraudulent behavior that's designed to attract male suitors. At least those who would inhabit places like Belle Rive and Tara.

Goins captured Blanche's loony desperation and mute appeal. And Tennessee Williams does give her a lot of loony to deal with. The playwright's evocation of Blanche's past is, typically for him, so vivid, bizarre and humming with repressed sexuality that it requires enormous discipline and conviction of the actor. Regan Goins made Blanche live those memories and terrors acutely before our eyes.

Much of the middle of the drama involves Blanche's hopes of escape -- via a man, preferably with marriage involved. She fixes upon Mitch, a card-playing buddy of Stanley's who is gentle, perhaps a bit slow, still living at home with his ailing mother. That's the only role among the card players with any depth, and Mitchell Slan filled it well.

Cheri Prough Devol's set rises high. The Kowalskis' two-room apartment was realistic, including an array of windows with broken louvres across the back, while upper floor of the building lifts up into the suggestion of cartoonish New Orleans.  Phillip Owen's sound design was superb, reflecting mood without being intrusive and its directionality sometimes surprised us.

Streetcar received the Pulitzer Prize for drama in 1948. That was the era of the three-act play, and Williams wrote long.  I heard an anguished mutter from a student sitting behind me when he realized that the first act had clocked in at an hour and a half, and there were two more to come. We spent about three hours in Blanche Dubois' world during last week's performances, getting out at just about eleven o'clock.  That was fine with me.  As Austin artist Travis Bedard grumpily tweeted yesterday, perhaps a propos of the Academy awards, Stop telling writers to keep it short. I don't want to watch teevee on stage, I want a world to live in with them.

I imagine that it would have been possible to cut this script cleverly and well, somewhat the way companies often do with Shakespeare. Thanks to director Michael Costello for giving us the whole thing. And for picking Regan Goins for the lead role.

Click to view the program for A Streetcar Named Desire

Parking: Special Event Parking for all fine arts events occurring in the Performing Arts Center is now only available in the Edward Gary Street Garage, 405 N. Edward Gary Street. The garage is located on the corner of University Drive and Edward Gary Street for a flat fee of $5 per event. Please Note: The garage attendant will only be accepting cash. Credit/debit card transactions will not be accepted for special event parking.

Fundraising Dinner & Show: Saturday, Feb. 21 at 5:30 p.m., includes a pre-show dinner in the lobby of the Performing Arts Center. Tickets are $150 with a limited number of seats available, and $100 from this event is considered a tax-deductible donation. Open to the public.

Talkback with Shirley Knight: Friday, Feb. 20 immediately following the 7:30 p.m. performance. Knight was nominated for a Best Supporting Oscar for Tennessee Williams’s Sweet Bird of Youth playing opposite Paul Newman, and she has played the role of Blanche DuBois twice in A Streetcar Named Desire. 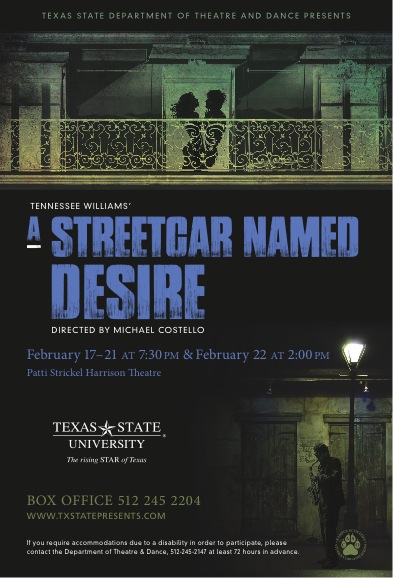