Review: A Flea in Her Ear by Texas State University
by Michael Meigs

Sex farces never grow old because jealousy and foolishness are always with us. Georges Feydeau kept a table at Maxim's in Paris and produced one farce after another, some sixty in all staged over the 40 years before the First World War. A Flea in her Ear (Une Puce à l'Oreille) is by far the best known to English speakers but titles of others suggest that Feydeau knew when he was onto a good thing and stayed firmly with the comedy of deceptions and flirtations. Some examples, in chronological order: Love and the Piano, Fair Game, The High School Girl, She's A Woman of the World, The Swappers' Hotel, Don't Walk Around Naked!, I Don't Cheat on my Husband, and Hortense Says, 'I Don't Give A Damn!'.

Texas State University does a bang-up job of producing this creaky but timeless classic at the Patty Strickel Harrison Theatre. Scenic designer Court Watson provides the energetic young cast with the necessary multiplicity of doors to be slammed with split-second timing in the bourgois home of the childless but devoted Chandebise couple in Acts I and III, as well as the signature revolving bed for fugitive concealment at the 'Frisky Puss' Hotel in Act II. Director Michael Costello orchestrates the cast with fine pacing and movement, frequently surprising with gestures or attitudes more characteristic of silent films or vaudeville than the modern stage.

Bourgeois businessman Victor Chandebise (Matthew Drake Shrader) and his wife Raymonde (Julia Babin), long married, have come into a period of uncertainty. He confides to his doctor that he's having problems doing, well, you know, it -- and we hear Raymonde tell her girlfriend Lucienne (Roberta Ahrens) that she suspects he's having an affair. A pair of suspenders (male) has been delivered to the house from a hotel of dubious repute. The lady buddies concoct a scheme involving a forged letter on perfumed stationary to trap Victor and reveal his infidelity.  Of course, everything goes wrong -- not least because Victor's as honest and uxorious a hubby as ever existed in France. 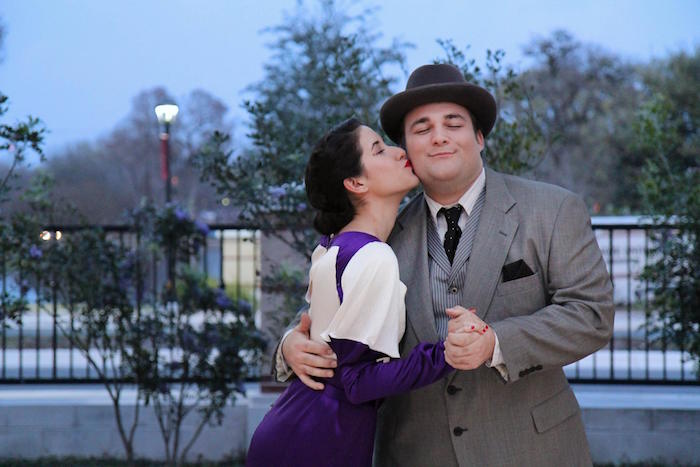 Feydeau joyfully throws one secondary character after another at us.  Victor's tongue-tied nephew Camille, who's the real frequenter of the Frisky Puss; the cynical Dr. Finache (Michael Burrell), callous about patients and a devotee of sexual dalliance; Chandebise's associate Romain Tourel (Chase Naylor), who aims to seduce Mme Chandebise; comic mansion servants (J. Robert Moore and Emma Hearn); and the violent-tempered and wildly jealous Spanish grandee don Carlos (Nicholas Ortiz) whose passions and violence were no doubt seen by French audiences as equally dangerous and infantile. Plus in Act II the owner of the Frisky Puss Ferraillon (Gunner Bradley) with staff and guests.

Feydeau piles one complication upon another, the greatest joke of all being the fact that this sex farce features as its protagonists a husband and wife who really have absolutely no intention of seeking out infidelities. Mistakes, misapprehensions, little white lies and coincidences plunge both of them into confusion, and there's not a single character anywhere here who actually manages to get between the sheets with another, at least not during the period of the action of the play.

The device that keeps the confusion spinning -- so that it's not all simply clarified in the first act and a half -- is a coincidence so enormous and convincing that it could only occur in French farce (or in Shakespeare).  Smoothly tailored and self-assertive Victor Chandebise is the exact double of the doltish dim-witted porter at the Hotel, Poche. Shrader plays both. He differentiates so beautifully between them in diction, physical stance and character rhythm that we're happy to laugh at the fiction that others -- Chandebise's wife, nephew and associates -- don't perceive those very differences. It's a long-running schtick, very carefully described by Feydeau in his original text, even down to the details of the quick-change costumes required and a suggestion of a tailor shop to fabricate them. Amidst the confusion, we're almost tempted to credit these two as different actors, even though we know that Shrader's in both skins.  And he does a tidy little turn at the curtain call, taking a bow as each personage. 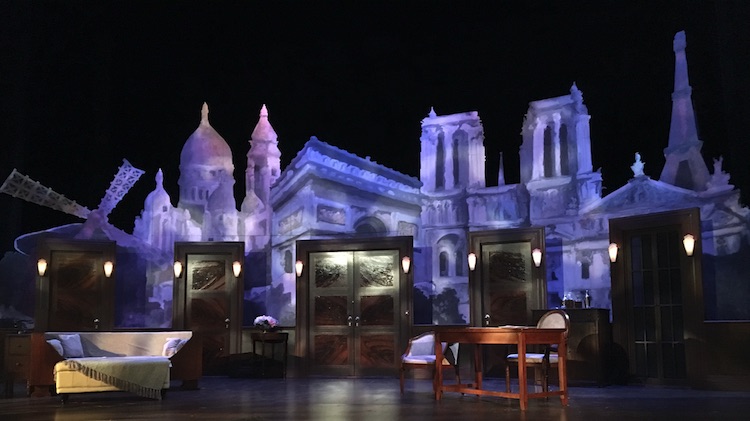 Texas State brought talent to bear on the design, as well, investing in a curious looming assemblage of enormous watercolor-like paintings by Anne McMeeking and design students for Acts I and II that depict Paris locales from Sacré Coeur to the Eiffel Tower. The Frisky Puss (in French Le Minet-Galant, or the 'Gallant Tabby') is a simpler set that relies on the rich purple sheets of the revolving bed and a reversed marquee spelling out the name of the place. Phillip Owen's choice of music for intervals is appropriately based on a French accordian ensemble (although wasn't that first melody from Brazil?).

Costumes by freelancer Devon Painter fit the late Belle Epoque very nicely, especially with the brilliant fabrics and designs of the ladies' dresses. She makes one astounding mistake, however, and it's so enormous that one must assume it was done in concert with director Costello. Spanish nobleman don Carlos Homnides de Histangua, client of Chandebise's insurance firm, appears throughout the play dressed in a variant of the traje de luces costume of a matador, including the montero hat, pink socks and slippers. It's a bit like expecting someone from the House of Windsor to conduct everyday business wearing a clown suit. Nicolas Ortiz, so convincing as Eddie Carbone in Texas State's Under the Bridge, mostly gabbles his way through this role, too often incomprehensible either in English or in Spanish, neither funny nor convincing.

Other male roles are assured and distinctive, particularly Gunnar Bradley as the put-upon hotel manager Ferraillon, J. Robert Moore as the butler Etienne, and, particularly, Jack William Rodgers as the panicky nephew Camille. Roberta Ahrens as Lucienne has a memorable comic set piece describing a tumble down the hotel stairs with Poche (thought to be Chandibise).

In this newly sensitive age, before too long we may hear criticism for staging a farce, however ancient, that bases some of its best comic bits on a mentally limited character (Poche) and on another with a speech defect (Camille, who gains and then disastrously loses a literal silver palate').

A Flea in her Ear is a lively and amusing evening with an attractive cast and amusing characters, a story in which no persons or animals (except perhaps poor Poche) were harmed. Not all classics are stuffily classical; this is one that'll help you laugh at imagined folly and enjoy good bourgeois comfort.

Click to view the program for A Flea in her Ear, adapted by David Ives, at Texas State University

A Flea in Her Ear
by Georges Feydeau
Texas State University

at the PATTI STRICKEL HARRISON THEATRE

plus $2 processing fee for tickets online or at the window. 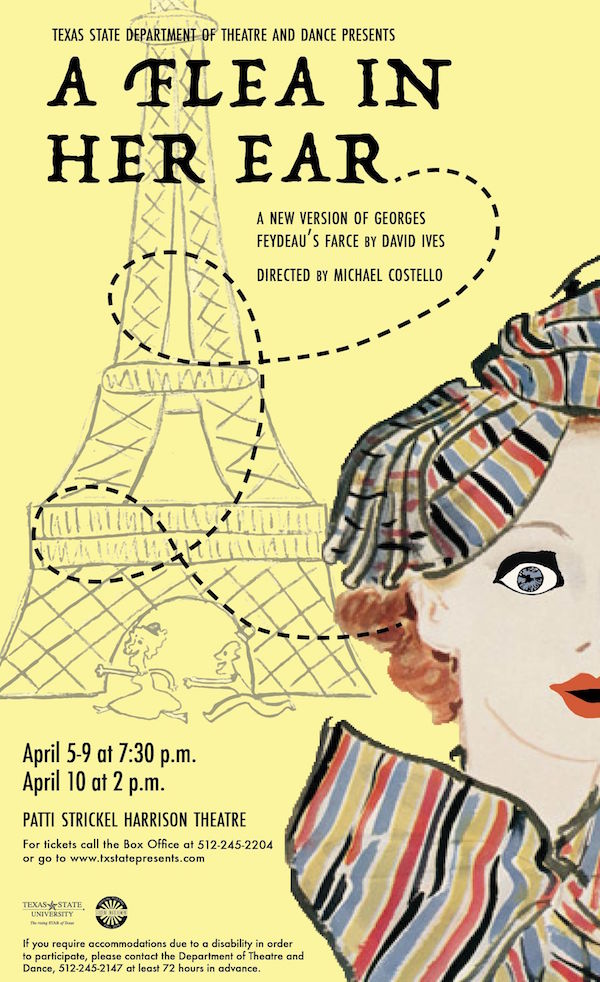