Review: A View from the Bridge by Texas State University
by Michael Meigs

Sublimely imagined, cast and presented, Arthur Miller's A View from the Bridge at Texas State is a production any commercial playhouse would dream to equal.

Miller was at the top of his form and very much in the public eye when he created the revised two-act version of this piece in 1956, seven years after Death of A Salesman and three years after The Crucible and its witch-hunting theme riled the House UnAmerican Activities Committee. In contrast with his Salem piece, A View from the Bridge portrays an impoverished Italian-American family in Brooklyn, the Carbones. Eddie, head of the household, is a hard-working longshoreman supporting his wife Bea and his teenage niece Catherine. The Carbones agree to take in Marco and Rodolpho, relatives who arrive as undocumented immigrants from poverty-stricken post-war Sicily.

The reflective, rumpled chorus to this story is Michael Costello, playing Alfieri, a small-potatoes lawyer who serves as intermediary and counsel to the impoverished of Brooklyn. Costello foreshadows the Carbones' troubles without revealing them, and he's more inclined to muse about the law than to tell a story. At crucial points during the evening Eddie Carbone comes to him for guidance, in sessions closer to therapy than to legal counsel.

The dialect and accent of Brooklyn English is rich and pleasing in the mouths of this cast, particularly in the fateful triangle that is the nuclear family of the Carbones. Nick Ortiz as Eddie, Jordan Puhala as his wife Bea, and Laurel Toupal as their niece convince us first of all with those speech patterns, fully worked through and articulated. Costello as Alfieri shares the lingo although he uses a college-tamed version of it. The Italian-shaded English of the immigrants is a touch too fluent to convince us, but by the time their presence has become a perpetual annoyance for Eddie, we're too much invested to disbelieve.

Like Death of a Salesman this work is the tragedy of a common man. Miller's protagonist is a simple, striving dockworker who does not entirely grasp the circumstances that gather to destroy him.  While Willy Loman was enamored of a dream, Eddie Carbone is in denial concerning his feelings both protective and sexual toward his niece. This Brooklyn society operates under its own rules, in solidarity of family and neighborhood against outsiders and formal authority; merciless exclusion is the penalty for transgression. 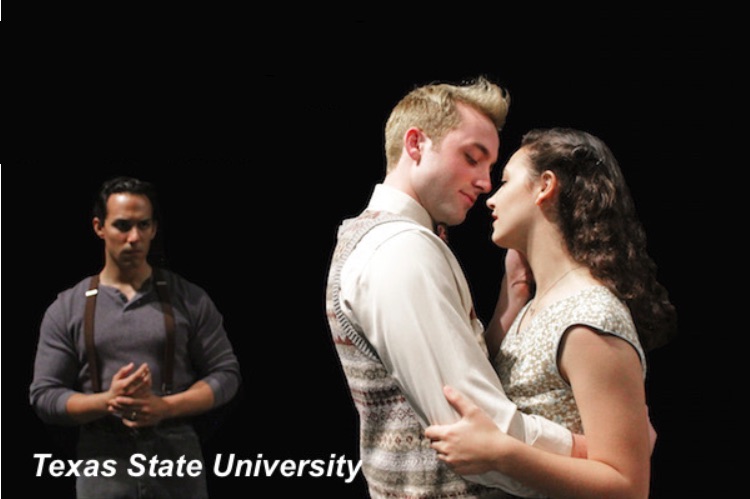 Nick Ortiz embraces the character of Eddie Carbone, projecting the swagger and adamant talk while modulating it all the while with gesture, reflection, pauses and expression. His authenticity and presence are gripping every moment he's on stage, a man living up to a masculine paternalistic ideal but consumed from the interior by misgivings and uncertainties. Puhala as Eddie's wife Bea is by turns affectionate, appealing and rigorous with him. Her performance is as mature as that of Ortiz, and we simply do not care that Miller's characters as written are ten, perhaps even twenty years older than these actors. They have us irretrievably wrapped up in Carbone reality as Eddie's anger grows.

The age problem is of no consequence to Laurel Toupal as Catherine or to Chase Naylor as Rodolpho the intruding unmarried undocumented immigrant. We believe immediately in Catherine's delight at getting a job, her filial love for Eddie, and her growing attachment to Rodolpho. Naylor marks both Roldolpho's fantastical talents in design and entertainment and his consternation at Eddie's rejection of him.

There's a turbid and unhappy current in this play, one that has the power to shock and surprise even all these years later. Our protagonist is a man of rigid inherited values whom we discover to be struggling with jealousy, near-incest and rejection of a rival expressed in veiled accusations of homosexuality.  Eddie Carbone refuses to look into himself and rejects his wife's attempts to discuss these subjects. There's no priest or confessional for him; Alfieri the lawyer is his only outside recourse, and Alfieri, stuck in the gray land between the law of statutes and the law of tribes, gives him advice he does not want to hear.

The fuse to the bomb that's Eddie Carbone burns shorter and shorter throughout the play, and the figurative explosion of the fight in the last scene is the culmination of all: the anger, the betrayal and the depths of love. The fight choreographed by Toby Minor is sudden, violent and convincing.

All this takes place within a set emblematic of the Brooklyn location, with walls defined by cords stretched like cables of the suspension bridge. Michelle Ney's design is both evocative and practical; sharply defined, slightly raked and standing two stories tall against the looming blackness of the huge stage of the Patti Strickel Harrison Theatre, it gathers our attention into a more intimate space.

A View from the Bridge is complex, gripping and accomplished, theatre of the highest quality. Congratulations to director Melissa Utley and to the rest of the talents who produced it.

A View from the Bridge
by Arthur Miller
Texas State University

plus $2 Texas State Presents processing fee for tickets online or at the window.

The opening night for A View From The Bridge will be Tuesday, Oct. 6, and runs through Sunday, Oct. 11. All performances will be in the Patti Strickel Harrison Theatre. Individual tickets start at $15 for adults and $8 for students, and may be purchased by phone at 512-245-6500 or online at txstatepresents.com. 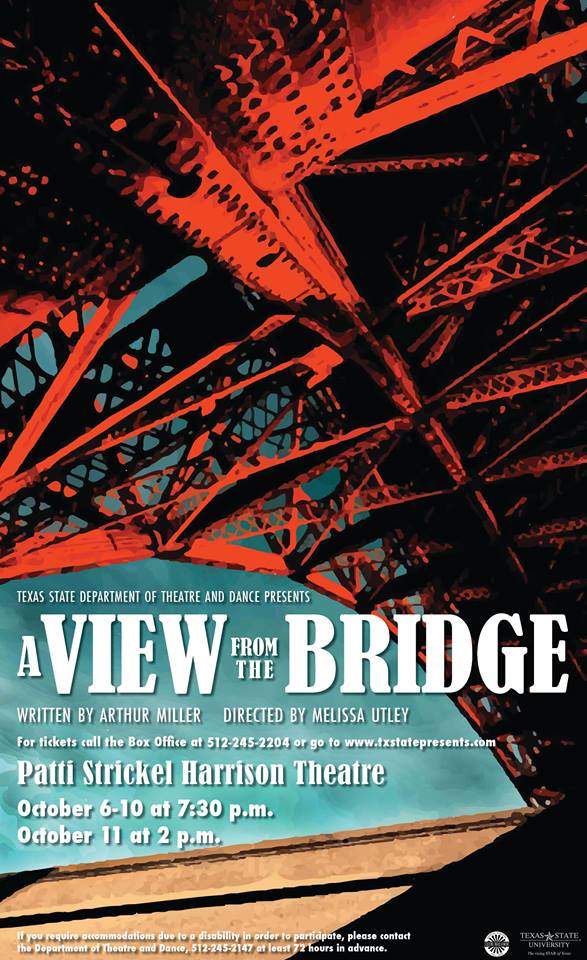