The mood is somber, almost bleak, the lyrics are enchanting -- “All he loved he loved alone.” The words refer to our titular character who stares thoughtfully or is it mournfully into the abyss of the fourth wall.The words are lifted from Poe’s own poem “Alone” and they capture the dark, black heart of the story of a man wanton of love, friendship and happiness who seems double-crossed by fate every step of the way.  The life story of one of literature’s most romantic figures is known by many in sketch form: he wrote amazing works of creative arts, is credited with inventing entire fiction genres, but never saw much success in his lifetime of struggles. He died in poverty, unrecognized for his genius.  This colossal injustice of fate is the ultimate victim fantasy of millions of struggling writers. Yet this is an all too concise version of the true tale. 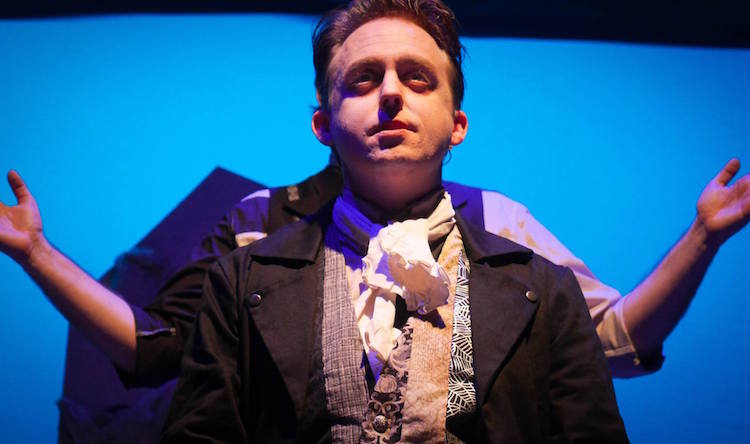 Fortunately, the musical “Nevermore: The Imaginary Life and Mysterious Death of Edgar Allan Poe” adds flesh and depth to the story.  The majority of the plotline is based on Poe’s actual life and works with a little bit of creative license thrown in.It was originally written, composed and directed by Jonathan Christenson and produced by the Catalyst Theatre in Edmonton, Alberta. Now it can be seen in Austin, Texas, produced by Michael McKelvey’s much beloved Doctuh Mistuh Productions. This company began in 2009 with the spectacular and blood-soaked Evil Dead, the Musical.Their mission includes producing unique high quality musical theatre that pushes the envelope. While this is true, the productions they chose are always highly recognizable icons of pop culture such as Silence of the Lambs, Reefer Madness, Heathers and even Debbie Does Dallas.  So Poe’s inclusion into their cannon is entirely logical and welcome  Every production of theirs that I have seen has been of the utmost quality making their name, Doctuh Mistuh, equivalent to a sure bet.

So what about Poe? 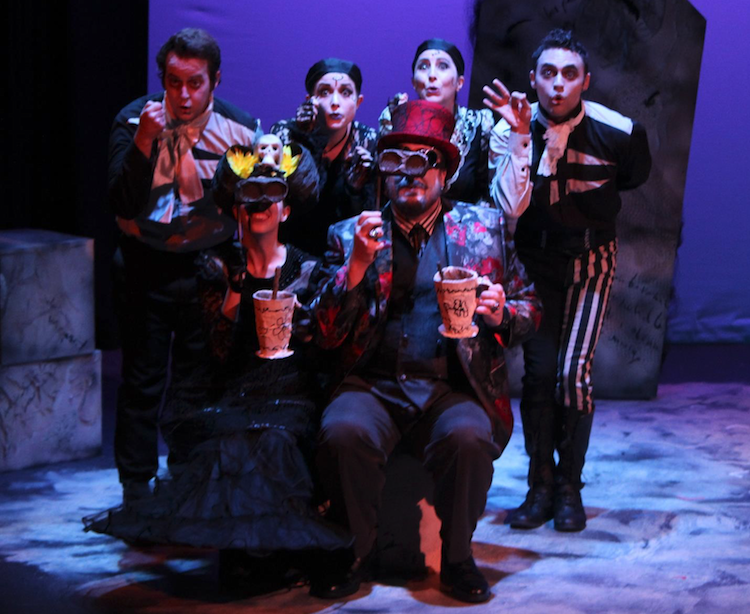 As mentioned above, the best thing about Christenson’s work is not what we know but what we don’t know about Poe. There is a multitude of details that rattle by as the musical vamps up its pace. We learn of Poe’s birth (at the intermission his acctress mother reputedly “shat a little Poe”), his troubled childhood since his parents were revival actors (though the contest was handily won by his mother), the untimely loss of his parents, his being taken in by cruel and distant one-eyed man and a woman descending into madness, his separation from his siblings -- all of this in the first ten minutes of the play and while our much beleaguered hero is still a child.  The story goes on to cover most of the dour details of his life’s adventure.

There is no doubt that Poe’s life can be viewed as tragic. This production takes a romantic figure and essentially romanticizes him all out of proportion (to paraphrase another famous Allen).  Herein lies the tell-tale heartbeat of the production: hyperactive hyperbole. Which is exactly as it should be with a musical. Big broad strokes of emotion, passionately charged singing and minutely detailed costumes.

And what costumes! Glenda Wolfe turns in an award-worthy costume design at every turn. Every new character is distinctly delineated and smartly dressed -- important, since the play has well over sixteen additional characters that are helmed by only six performers. The costumes are dominated by Victorian chic with a Tim Burton-esque flair. 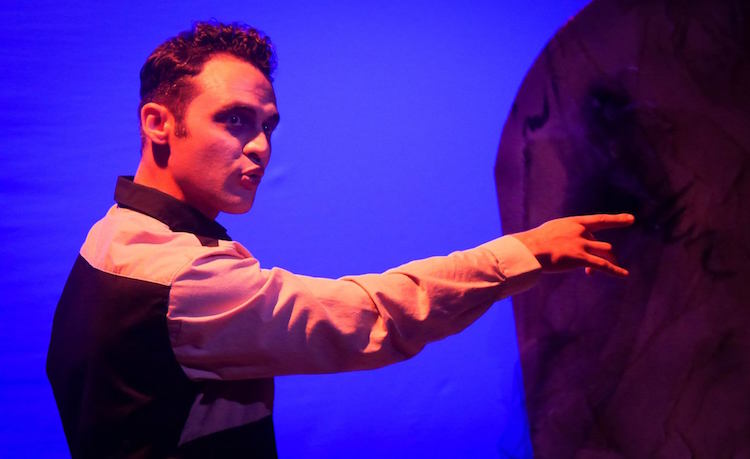 The musical style of the songs brings Stephen Sondheim very much to mind, full of rapid staccato singing. The verses are dominated by quick quatrains that have the effect of demented nursery rhymes. The music itself falls away into the background like a dark shadow quietly following the singing: it's there only to give the words a home rather than to add depth. Unlike Broadway musical stylings, none of the songs is particularly catchy or distinct: you won’t be humming them on the way out the door. In this way, the music and ambient sound design remain as vehicles that not only help the story along but also define the mood of the scene.

The mood of most of the scenes? You guessed it: sad.

And herein lies the play’s Catch 22. We like scary ghosts and ghouls. We love an underdog. Though some of us won’t admit it, we like the sorrowful woe-is-me emo mindset. We love Edgar Allan Poe with his humble unrecognized genius, fierce yearning for love and bad boy hard-drinking and gambling mystique. We adore his writing. Even in high school when liking poetry seemed taboo in the cool circles, one could get away with admiring The Raven. We love it all, but at no point is there any hope for the lead character; without hope, suspense is compromised.  We see him get the girl but we know he is going to lose her. We see him get a taste of fame but we know it will be fleeting. The intrigue and fascination in this play come from the new things we learn about Poe, not from watching the story unfold.

The style, professionalism and top-notch talents of the performers make this a thrilling night out, especially during the season of witches and ghosts. Don’t dare to miss this one or your fate may be the same as that of Poe which, in a word, is woe. 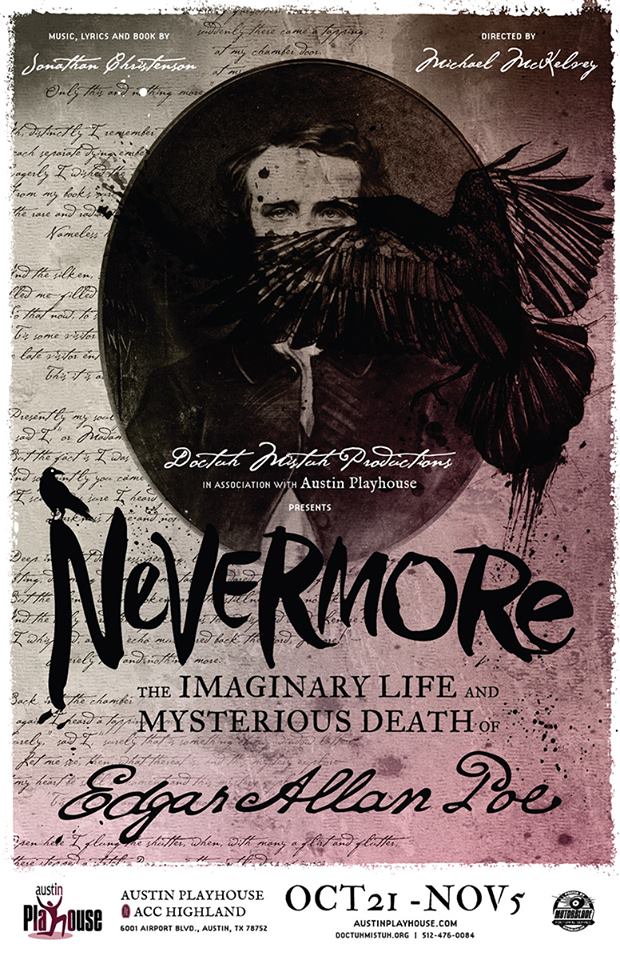 Doctuh Mistuh Productions made its debut in the Austin Theatre scene with EVIL DEAD, THE MUSICAL in October of 2009.  Since then, DMP has gone on to entertain its loyal …