Lardo Weeping has been called a chamber opera, a smaller-scale opera designed to be performed by a chamber ensemble and a smaller cast. Such a confining definition certainly does not capture the operatic grandeur of this production. Its impact on one’s impressions is magnified by the sensory contrasts it imposes on attendees.

The production is professionally realized, and the first contrast is the venue. Crashbox is an interesting choice for staging an opera, and one that gives the show an alternative performance atmosphere. The space is a repurposed auto repair shop configured as a smallish black box theatre at the end of a row of industrial shops. Enhancing the alternative, avant garde atmosphere is the large factory quality dumpster out front set around with large, discarded furniture pieces and lumber. Vanquished are any memories or thoughts of some great hall, proscenium stage, and enormous house chandelier à la Phantom of the Opera. As a theatre, Crashbox is gaining cachet by hosting impressive shows, notably the Rude Mechs’ Heroic Dose, and most recently Paper Chairs’ Bloody Wedding. Lardo Weeping can only elevate its reputation further. 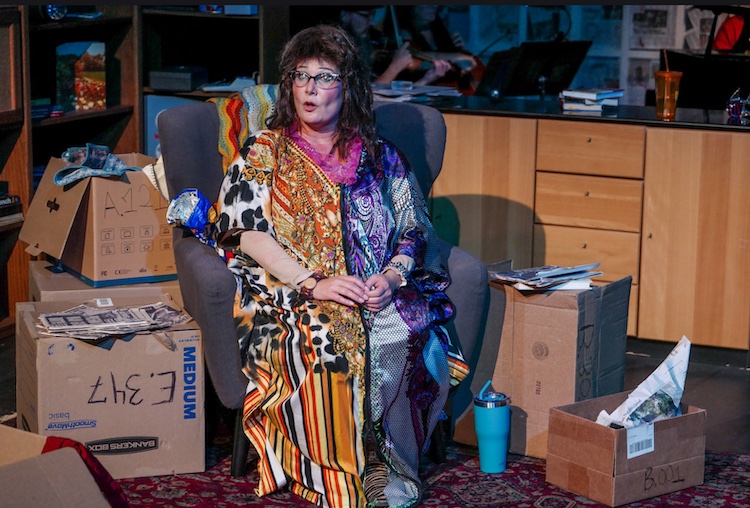 Walking into the Lardo Weeping set is like walking into a wrap-around jewel box or giant Faberge egg for its color and scattered-about, too-much-is-not-enough flotsam and jetsam of an advanced eccentric’s life. There’s so much stuff that the set creates the strong impression of being larger on the inside than it is on the outside. Oh, and don’t forget the exquisite musical ensemble upstage directed by Peter Stopschinski in haute-fashionable pajamas. The set and props designer, Ia Ensterä, created it all well up to her standards, and we welcome her back from her stint in Finland. Rebecca Herman as artistic producer and stage director kept it all together. Lighting design by Kendra Wiley led us ably through the story with its emotional twists and turns 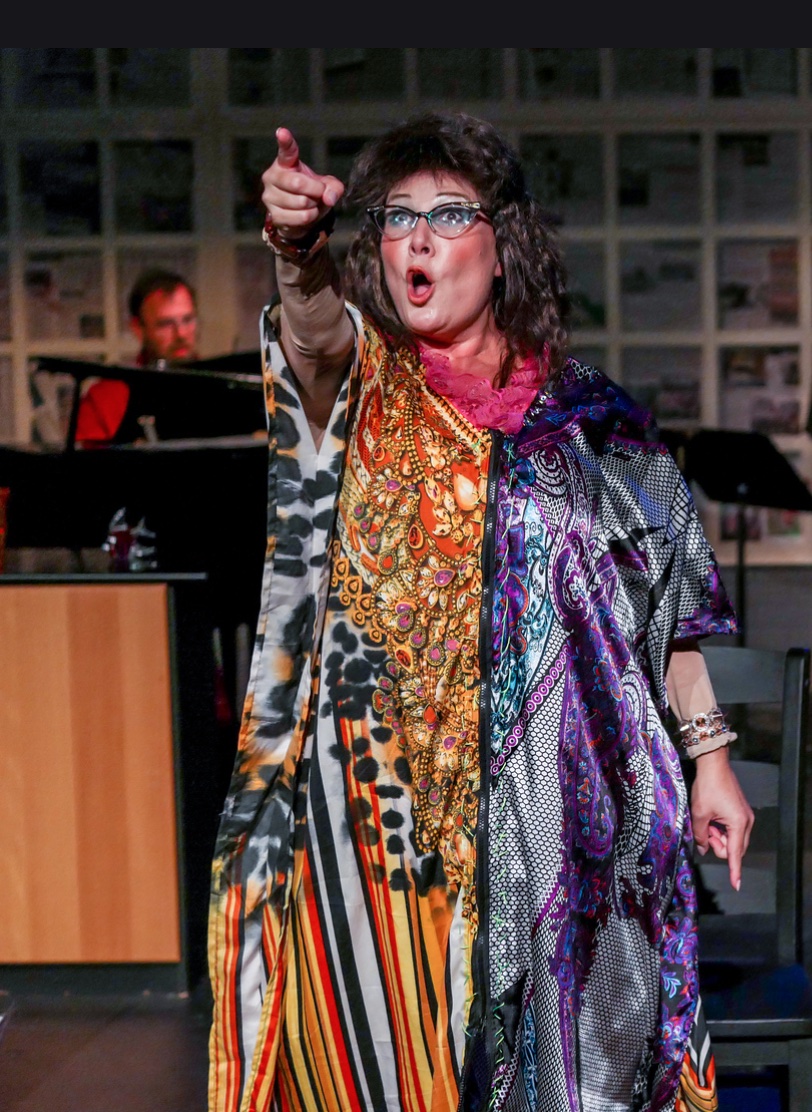 Produced by Local Opera, Local Artists (LOLA) this opera by Terry Galloway (book and libretto) and librettist and dramaturge Donna Nudd is now in performance. Peter Stopschinski composed the music and serves as musical director and pianist. Liz Cass is the executive director of the show, executive producer of LOLA, principal voice (mezzo-soprano), and actor. The show has been long in development, with a partial staged singing at Ground Floor Theatre in 2019, followed by the Covid 19 pandemic interruption (although bits and pieces have escaped Terry Galloway’s creative mind over many years). The formal premiere now is welcomed gratefully by the Austin opera-going public and fans of the principals.

Liz Cass did the heavy, heavy lifting of the singing as the beyond-eccentric Dinah LeFarge. As always, Ms Cass performs her singing duties with a certain confident lightness, never dropping tone and staying well in sync with Stopschinski’s music. Every moment of listening to her is enjoyable.

The story showed us from the start an extremely eccentric individual with a colorful but messy apartment, wearing a house dress composed of two mismatching dress halves sewn together. Clearly, this is not Aïda. At first, Dinah’s self-control looks overdetermined as she eats one potato chip then rushes to the refrigerator side panel to mark it down on a chart as a vegetable for the day. Then things start to loosen up as we see her pick up a firearm, scream, rush out the door to her mailbox, and rush back in with the mail. This is obviously a daily occurrence, and the demons in her head are clearly the other human beings outside her apartment. 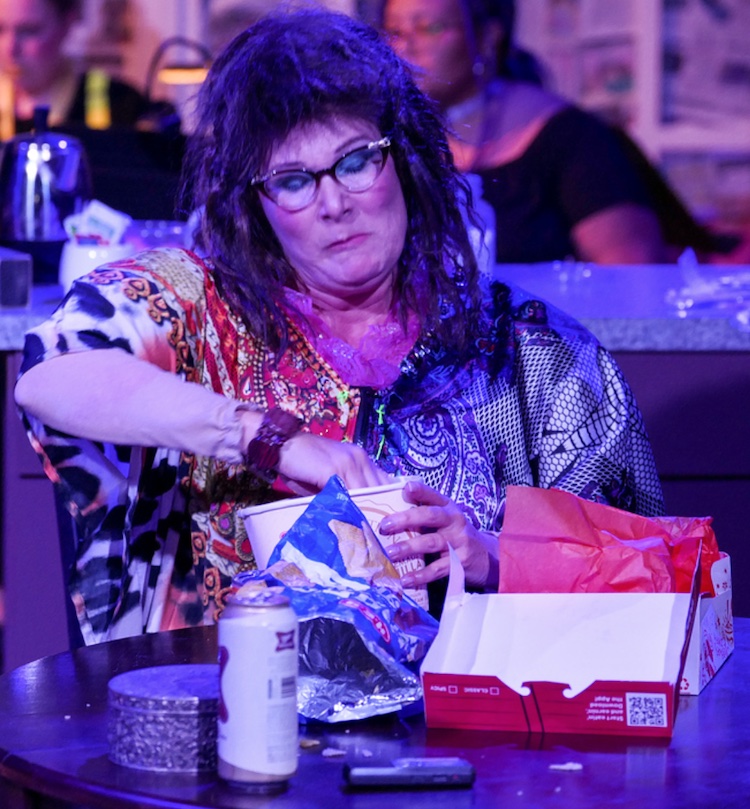 The eating events continue, progressing well into food items of greater quantity and lesser nutritional value. Food describes a descending thematic arc of the opera, the main one, but other themes ride along with multiple addictions and advancing debility. We observe an obsession with animal rights and a fascination with the Weekly World News.

Importantly, Dinah LeFarge has a healthy ego and tightly held ambitions, notably the ambition to become a producer of cable shows. She mails off a teleplay to three networks at once, and when they collectively reject her work as crackpot, she writes a Dictaphone letter warning of dire consequences for their moronic lack of discernment. All of this is sung magnificently, with supertitles by Carolina Cass. Later, in the Mordorian pits of gloom, Dinah still manages to sing to the effect of take me as I am!

We see a slow, piece by piece descent into dysfunction by someone with an initially strong ego and strong ambitions in life, into someone with an out-of-control eating disorder, a smoker who doesn’t even know she is smoking, and a defiant beer chugger. She is Wile E. Coyote, skidding to a stop about five feet past the cliff edge, delusional that she definitely has won the lottery this time, the one that will bring her so much wealth she’ll never again have to summon the willpower to blunt even one of her addictions. When she loses (always remember to choose #31), it’s the final meltdown. Hold up a sign bearing a portrait drawing of Emily Dickinson and fall into your Grand Canyon of despair.

A very special credit goes to costume designer Wendy Sanders. She created a marvelous interactive costume to depict Dinah LeFarge in her fullness.

Alexa Capareda choreographed and danced a reverie as the Dodo, herself and Dinah contemplating extinction. Capareda created the final colorful image of Dinah in depression, bizarre imagery come to life out of LeFarge’s tortured mind. Capareda accomplishes a strange scene, performed to perfection and somehow very, very fitting. 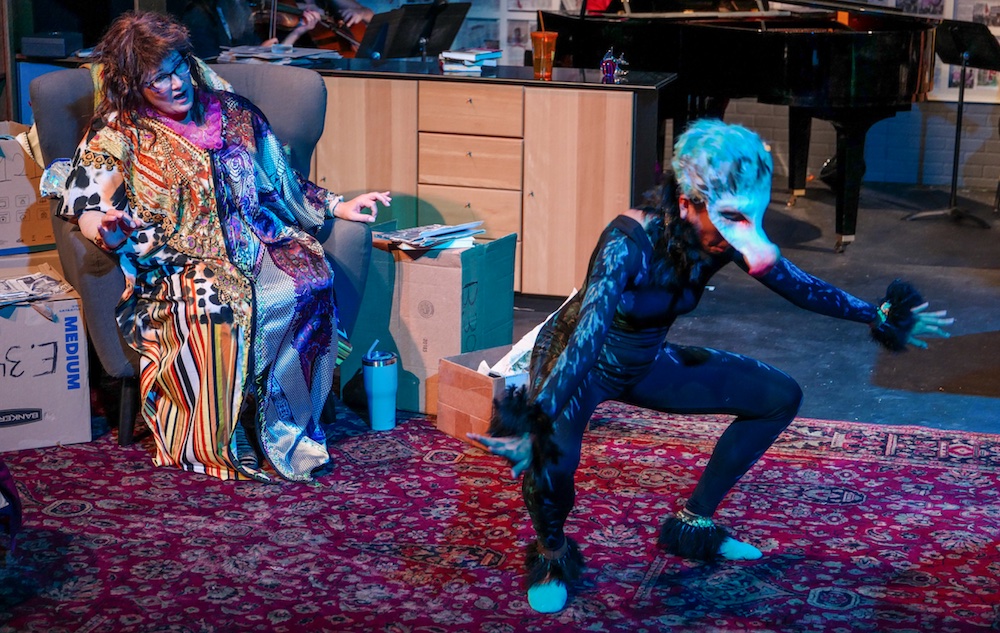 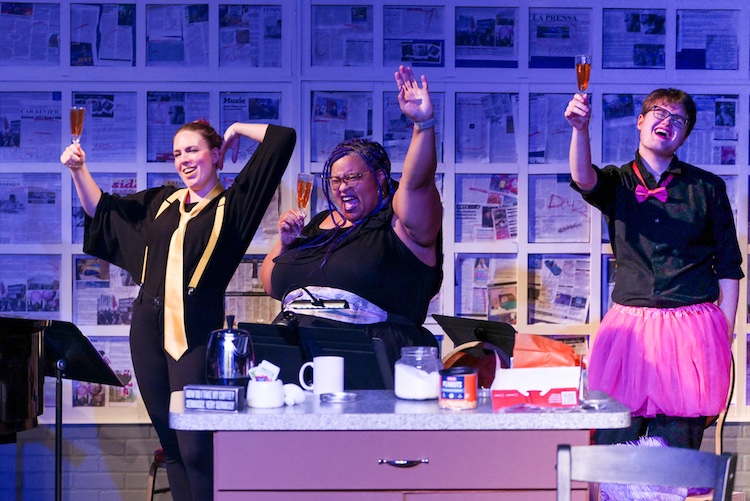 The musicians playing with Stopschinski on the piano were Phil Davidson on violin and Barbara George on cello. They were flawless. The three chorus members who also performed acting chores as foils for Dinah were Nicole Taylor, Page Stephens, and Holt Skinner.

The tragedy and darkness of Lardo Weeping is the harsh reality none of us like to admit—that most of us vacillate between ambition and hopelessness, strength and weakness, confidence and insecurity, success and failure, and never find true stability or strike a sustaining balance in our lives. However great our success, deep down there’s always a wobble. Simply recognizing that can bring peace. We don’t know if Dinah ever learns that lesson. We only see her singing about picking up the pieces and actually doing so. But what next?

Great credit goes to Terry Galloway and the collective for taking us on this tough, adults-only journey by way of the book and libretto, doing it with keen humor, holding this mirror up to us, and bestowing blessings on all the kooks, weirdos, dogs, and cats of the world.

Lardo Weeping runs from August 20 to September 2, 2022 at Crashbox, 5305 Bolm Road #12 in East Austin. Recommended for all thoughtful adults.

Tickets are from free to $25

Recommended for adults and mature teens with parental supervision

Visit LOLAaustin.org for tickets and information 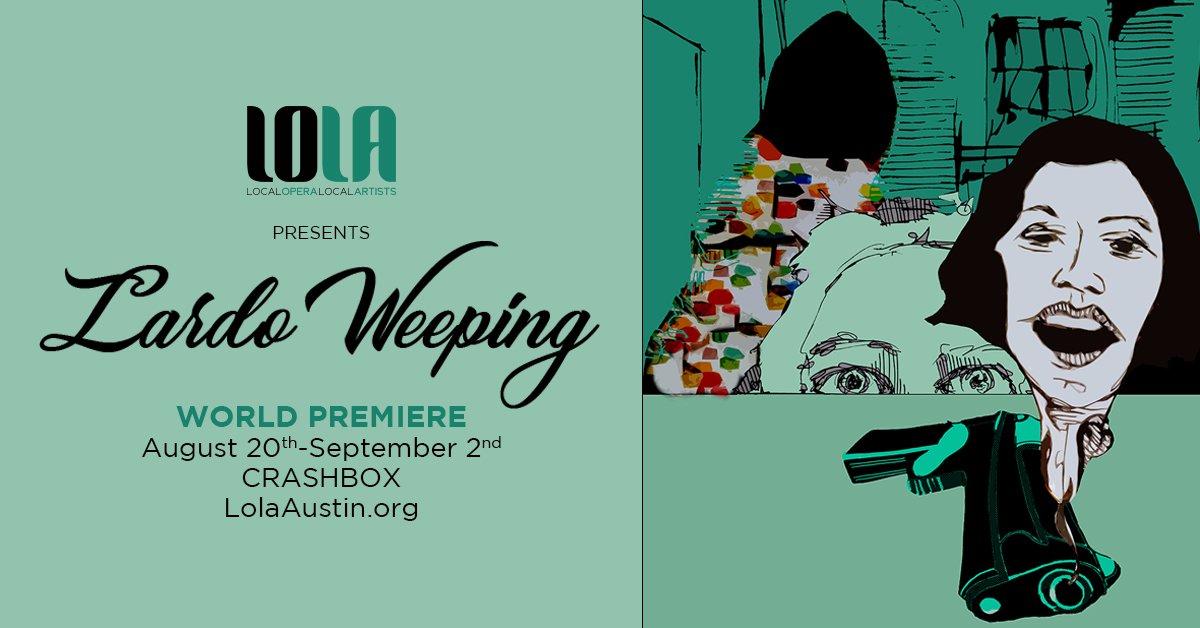