I have long known about Lighthouse Theatre, which has a residency at the Crestview Baptist Church in Georgetown, TX. My lack of attendance at any of the company’s performances is probably due in no small part to my own confidence that, upon setting foot in a church, I would immediately burst into flames and ruin whatever production I had come to see on account of being a godless heathen of a frequently outspoken ilk. 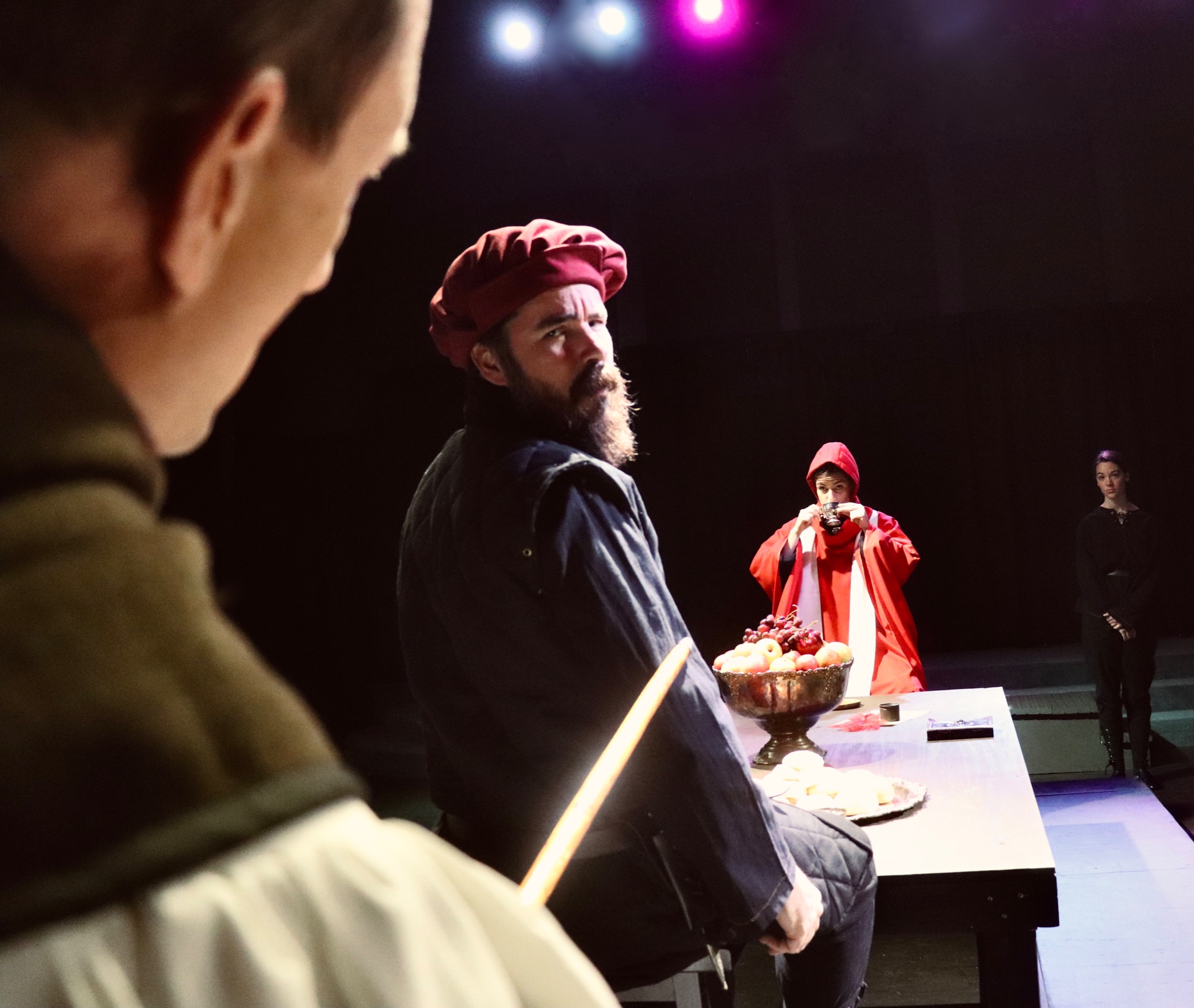 I was thankful not to become a victim of spontaneous combustion this past weekend when I attended Lighthouse’s closing performance of Saint Joan: God’s Mouthpiece. With nary a flame in sight, I came to realize during the performance that I had been doing myself a disservice. If Saint Joan, God's Mouthpiece is any indication of the quality of Lighthouse Theatre performances that have been ongoing at this venue, I am deeply disturbed that I have been depriving myself of such art these last few years.

Saint Joan felt so much bigger, so much more polished than its digs; it was a piece that would not have seemed a bit out of place if it had been performed in or by Austin's Hidden Room Theatre, though I‘m glad it wasn’t. Because this cast utterly nailed it. In short, go to Georgetown. See what they do. This is honest to God theatre. Pun intended. 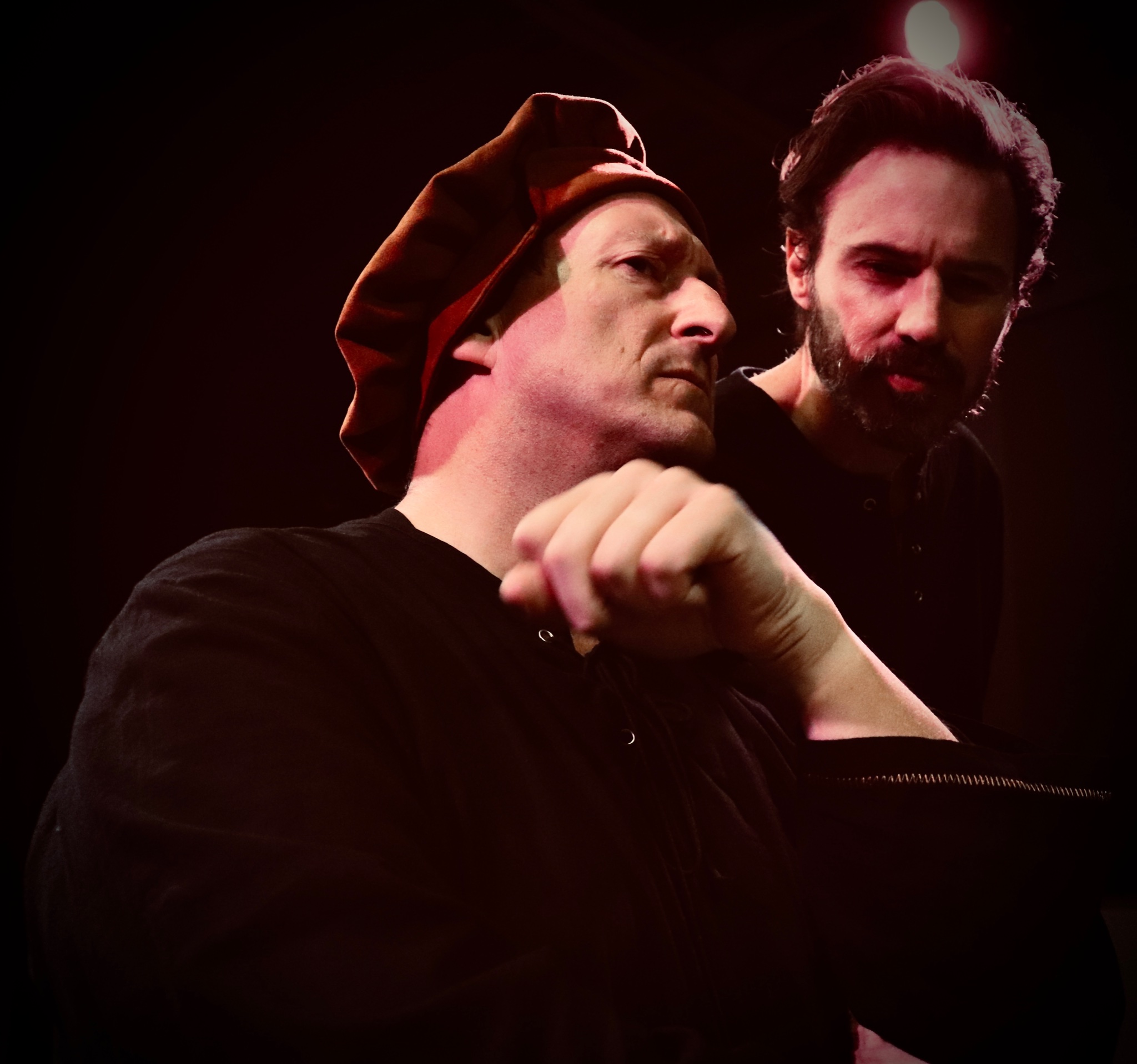 Saint Joan tells the story of Joan of Arc, her rise as a French military leader during the Hundred Years’ War, and her subsequent condemnation as a heretic. See, Joan had a major problem with authority, and was living her best life long before that became fashionable. The theocracy and political authorities of the time had their own ideas about what God wanted, but Joan felt she had a direct line of communication and didn’t want to play a game of telephone. She politely refused the Church’s offer to prostrate herself before men instead of her God. Then comes a stake and a fire, yadda yadda yadda, and we get a sincere “my bad” from the church, a few hundred years too late. Joan becomes Saint Joan, and now you know the story. (I don’t like summaries.)

With that telling, this updated version of the play by George Bernard Shaw doesn’t sound like it would be this riveting. The three-hour runtime is not for the faint of heart. Director Chase Wooldrige says this abridged version is an hour shorter than originally written. A quite surprising and welcome revelation is that multiple elements have been updated, some quite anachronistically, and make a hundred-year-old play about a 15th-century religious and military icon not only entertaining but hilarious. 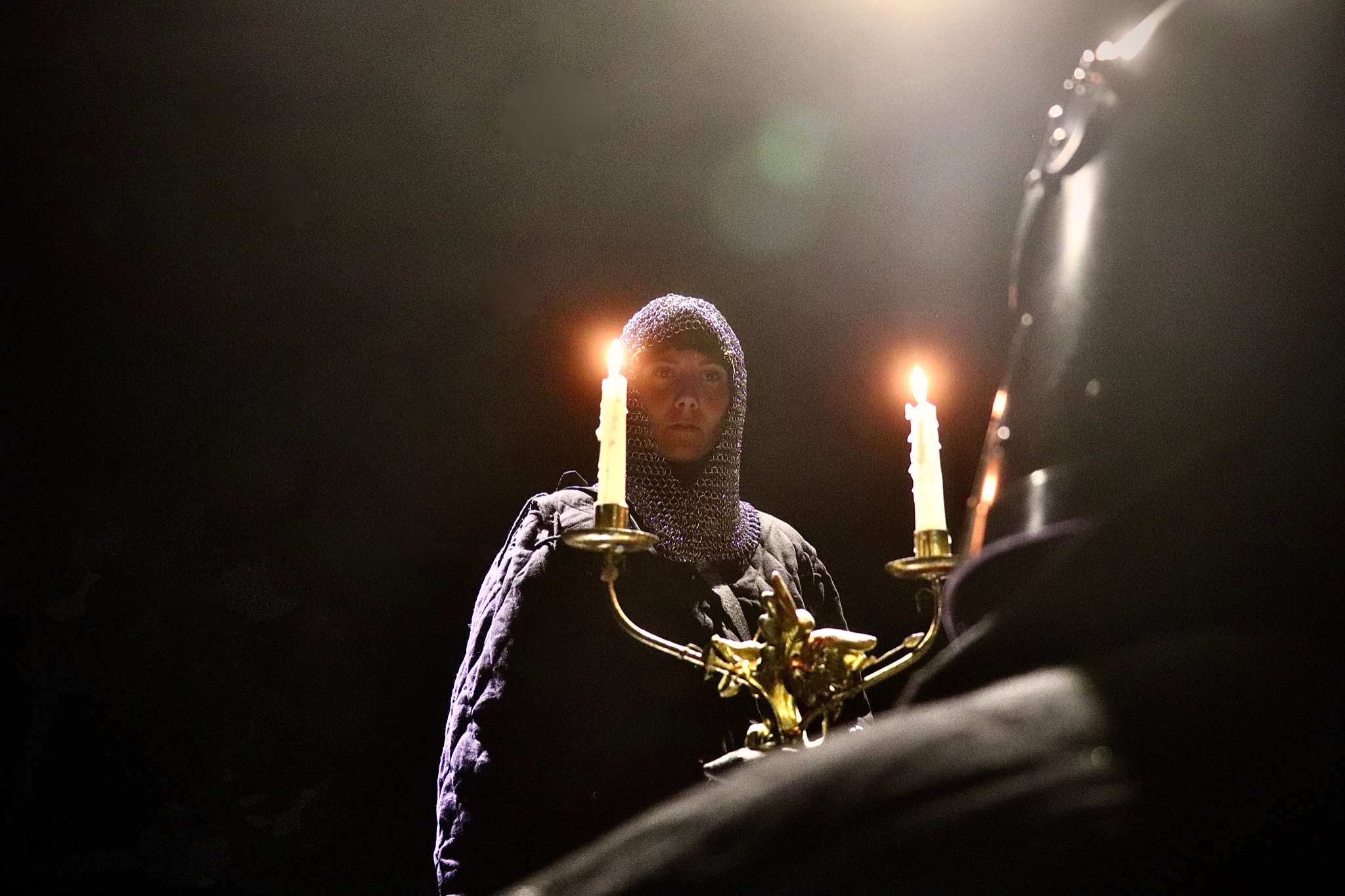 KarieAnn Randol, an Austin performer rapidly making a name for herself in theatre and film, is characteristically wonderful as Joan. Randol’s Joan has an iron will ; she's a decorated war hero and a strategist of uncommon skill, but she's also funny, likable, and almost whimsical. Joan is unabashedly herself, exuding a worldly self confidence we all wish we felt. She is unwavering in her convictions and attracts followers like gravity. Like those alongside her in battle, we’re pulled along for the ride, proud of her, and saddened that her credit was given only after it was long, long overdue.

Joan may be the star of the show, but the thief of it is John Paul Harkins, whose spirited performance as Charles IV merges the comical petulance of a child with the endless ambitions of the would-be and then-is king. He’s also terrifying, because I’m not sure that our modern day political leadership is any more skilled or mature. Harkins pulls double duty portraying Warwick, a much more measured man aiming to mitigate the myriad misconceptions of our mystic military Maid, Joan. (Sorry, I had to.) Anyway, Harkins just kills it. 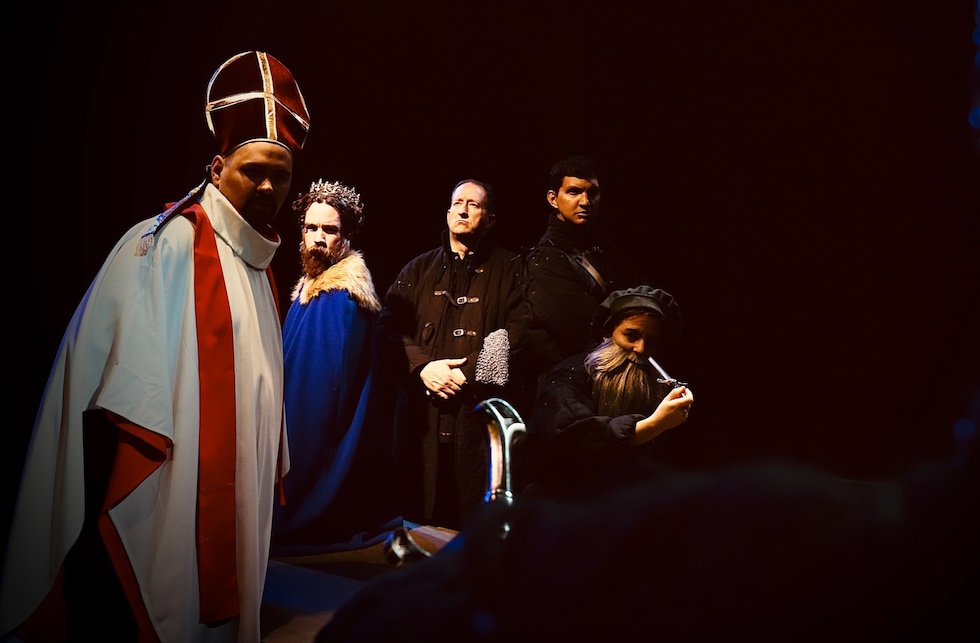 Anna Carvalho plays three different roles and somehow manages to look, sound, walk, and behave like a completely different person for each one. She’s most frightful as Cauchon, whose miserly dedication to the status quo makes us squirm. She’s villainous without being a villain. Craig Sowell also takes three different roles, each more frustratingly obstinate and deftly performed than the previous. Sowell and Varvalho perform six parts between them; each is unique in mannerism and tone. This duo transforms themselves into an ensemble.

Chase Wooldridge, the director, also takes on multiple roles with decided skill. His Archbishop is unwavering and pious, his Inquisitor infuriatingly staunch, and his soldier a convincingly low-class, brutish Brit.

Just to round out the excellent cast, Adal Munguia as Dunois has less stagetime than the rest but somehow has the most convincing character arc. Dunois’ proximity to Joan seems to inspire confidence and self-assurance by the end, where the exact opposite plagued him at the start. Munguia wields physical comedy well, and keeps the show quite fresh. 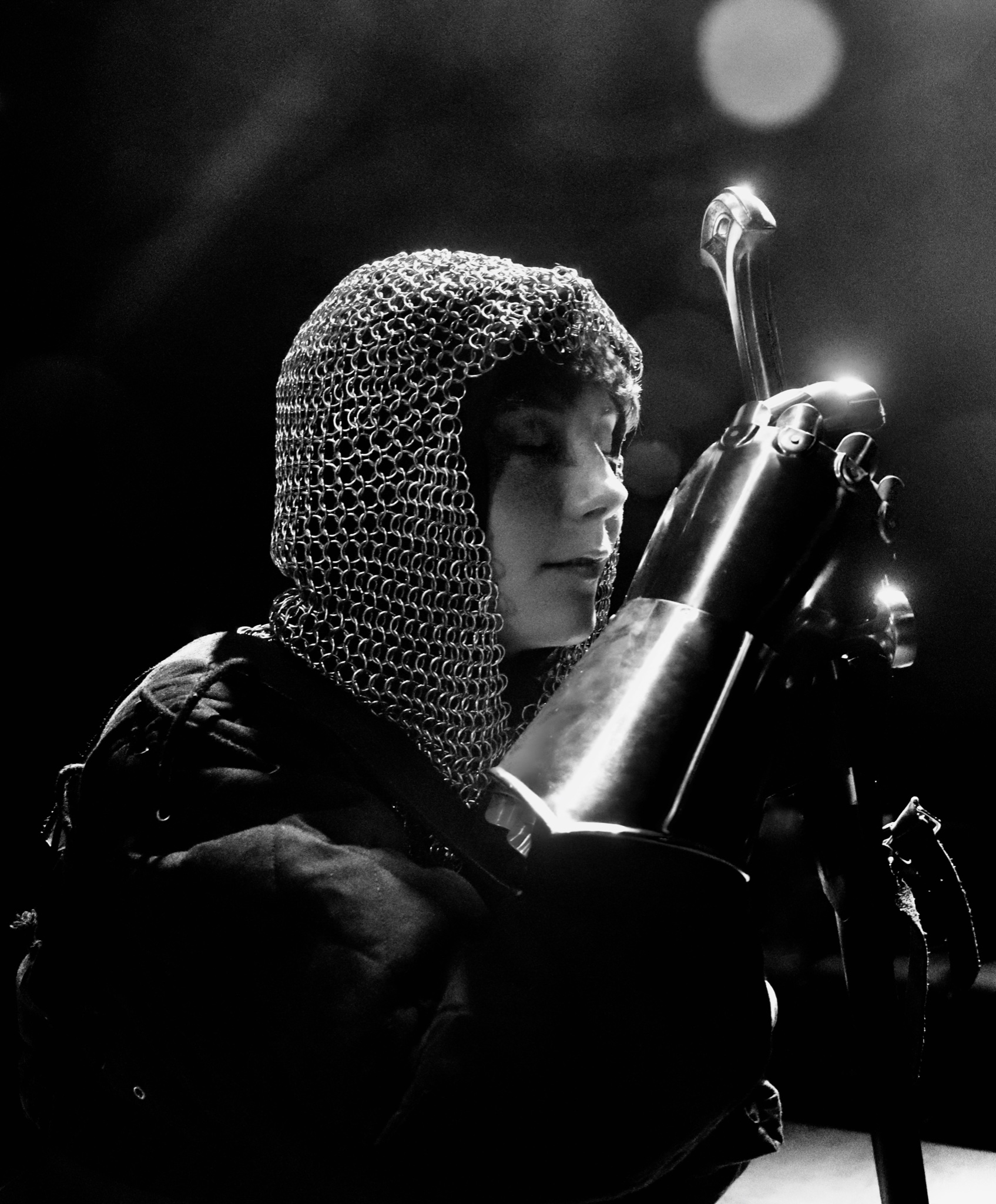 What’s most impressive about this performance is how all the pieces come together to make a three-hour play feel relatively short. Humor peppers the updated script and keeps us laughing. Longer bits were cut from the show to keep its pacing, and a new scene written by director Wooldridge feels completely at home here. The minimalist stagework is an excellent choice and surgically executed. It's there only to the extent needed, keeping performances on full display. The music rises above the performers and lifts the overall tone, and even the full blackout during scene changes is a welcome palate-cleanse and isn’t as common as it once was.

I could go on.

Saint Joan is grand in its story but tightly knit in its presentation. It’s inspiring without being overly reverent, which keeps it accessible. It offers much to chew on with regards to freedom of expression and speech, and it's especially provocative in encouraging confident conviction in the face of an oppressive status quo. Put otherwise - sometimes progress means bucking the system. That's perfectly demonstrated by a small theatre company in an offbeat venue, able to make so much with so little.

Tickets available via this QR code: 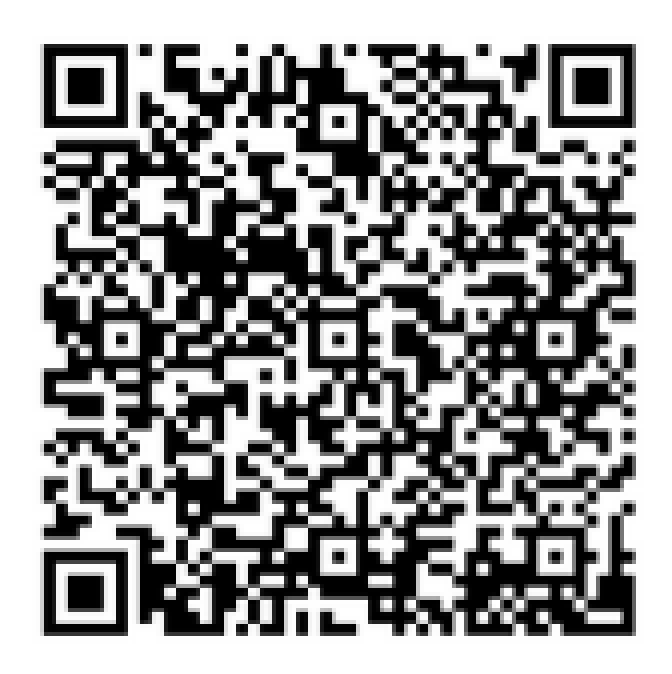 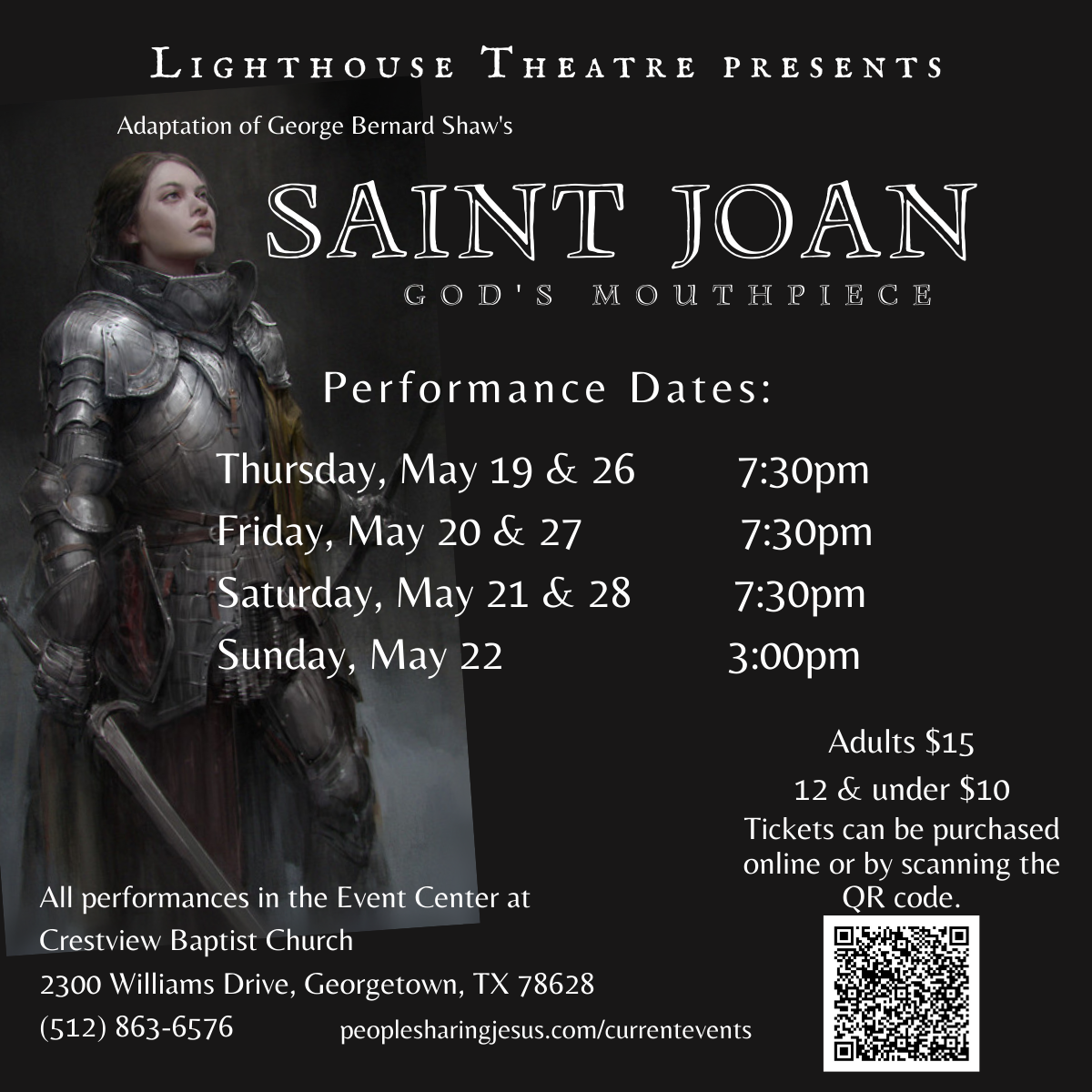