The Vineyard, a new play by Nicole Oglesby statged at the Trinity Street Theatre downtown, throws us in with under-thirty-somethings working and communing with angels at their own Hill Country vineyard and winery. They largely hail from the homeless streets of Austin. This gives the play immediacy and familiarity but without losing a potential wider audience. Its freshness is very well appreciated. And as we see every day, everyone on the streets has a fraught, sometimes tragic, back-story.

We receive play images suggesting that the winery is a modern-day commune where peace, love, macramé, massage, and the healing power of kissing are practiced; but in actuality the play also shows us that, other, less innocent, activities are pursued there, having to do with leading-edge bio-technologies growing in the winery’s vats. And it is all attended by a possibly for-real angel on a mission to earth. Or is she? The play’s hype statement might read: Ghislaine Maxwell marries Joel Osteen on the Island of Dr. Moreau with enough red wine to extinguish a beef Wellington binge. 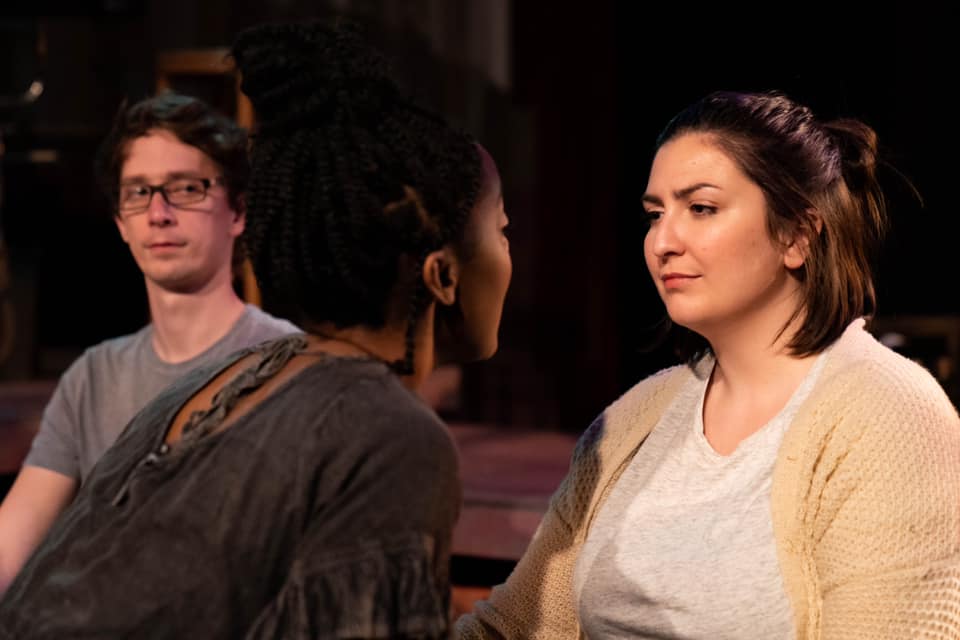 Many in the real world today believe the world is in its last cycle, and so does the angel, played by Khali McDuff-Sykes as Susanna. She journeys to the homeless of Austin, and with some divine sixth sense finds those in need of her vineyard. She locates the suicidal, impoverished, lost, and demented, not hard to find among today’s young. They go to the winery where they work on their wounds and this season’s harvest. Indeed much of the action depicts winemaking and bottling. When you absolutely, positively have to cast a beautiful angel for a demanding role, call Khali McDuff-Sykes. She possesses high talent, excellent physicality, and a beautiful voice. She got Jill Blackwood eyes…. 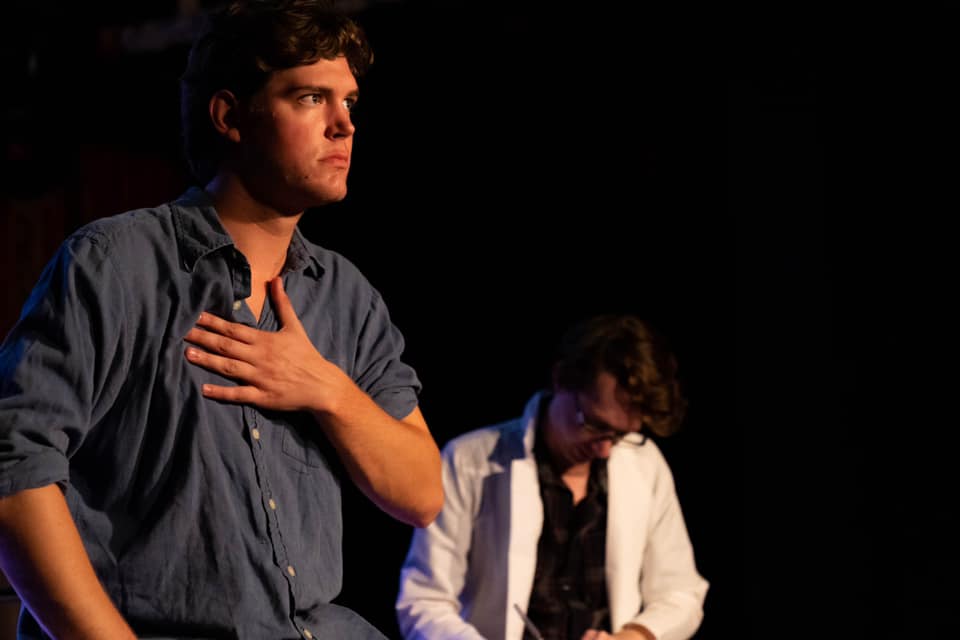 Healing and human transformation are the dual themes of the play, and they revolve bizarrely around the character of Kevin (played by Will Gibson Douglas), nrather than the angel Susanna. Kevin is a rather vaguely described Ph.D. graduate from an unspecified bio-engineering program and by implication Dell Medical at UT-Austin. Kevin espouses trans-human advancement and reacts defensively at the term “bio-hacking.” But that is exactly what he does, injecting viruses for effect and conducting surgeries on wounds and inflammatory conditions. He does it all under terms such as “healing,” “fixing,” “making it better,” and in the name of gaining a better world. When we see dry sand pouring out of an injection site on his arm, we view it correctly as a symbol of Kevin’s futility.

Douglas plays Kevin in a delicate balance between nerdy, gangly grad student and a kind of arrogant Dr. Victor Frankenstein, afflicted and eventually destroyed by hubris. These extremes of character are so disparate that the balance cannot always be found, even for an actor as gifted and powerful as Douglas. Kevin, with the best lines of any character in the play, embodies the will to become a superman, but says, “Everything I make is better than me.” This was spoken after he put communards at risk and wounded others further still. He was chastened and seemingly forgetful of his earlier boastful line: “…loving each other until the end of time,” spoken to Susanna.

The additional, highly competent cast members drove the action forward as denizens of the winery, pushing Kevin and Susanna to their worst and best. They are Rosalind Faires, Brooke Ashley Eden, and Brennan Patrick. Director Marian Kansas gave  them her usual crisp direction, featuring the efficient entrances and exits that are becoming her trademark. Set and props designer Taylor Travis created an imaginative and efficient center pyramid set design to represent the winery and the streets of Austin.

As with many plays of high concept, the problems are long, but the solutions are short. The overall sense of the play seems to be that fulfillment is found within the self, not outside it. We hear this a lot, which leads to the question, did The Vineyard need to be a play so well produced at Trinity Street Theatre? The play is competently written, but some dialogues seem shallow while others are sharp and engaging.  Some of the unevenness may be due to mismatches in the levels of elocution of the actors, but not all; the script bears some of the responsibility. A rare suggestion from this reviewer would be for the producers to workshop the play or workshop it further. This process would bring the dialogues up to well-seasoned piquancy beyond throwing in the f-word a lot. And happy outcome could make The Vineyard a polestar statement for the millennial generation and Generation Z in our perilous times.

The Vineyard is recommended to the generations just mentioned. It is supported by ScriptWorks, Austin’s own play incubator, and runs at Trinity Street Theatre in downtown Austin until November 9th, 2019.

Tickets are $15 - $25 plus service fees and are available online HERE.
Join us before and after performances for additional programming from Heartland!