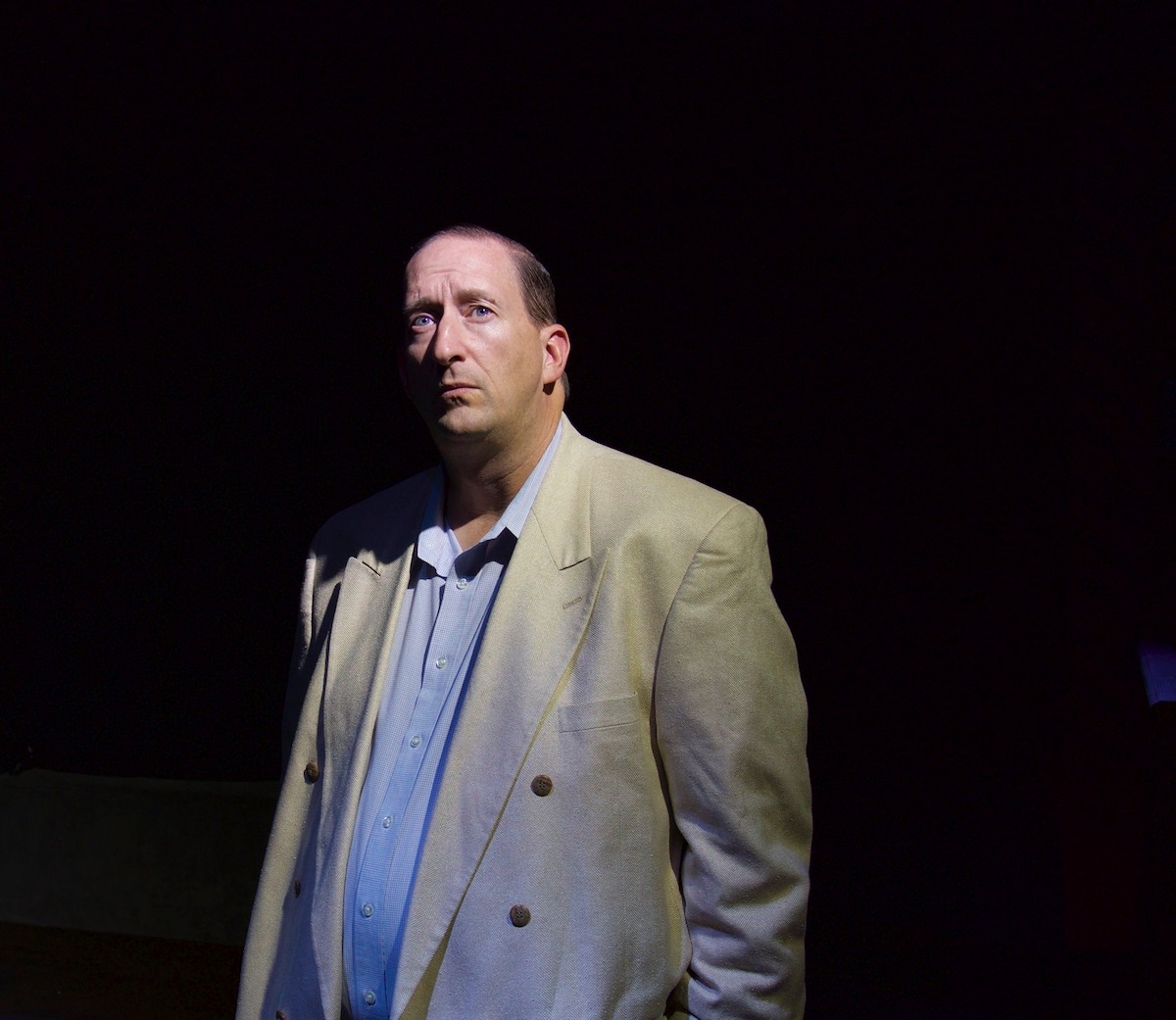 Of the deep delights of editing this website and reviewing live narrative theatre, the chief are the unexpected, the new, and sheer serendipity. This week I found myself panning one dazzling production and praising another by a playwright essentially unknown in the United States. Those checked the first two boxes. Shadowlands by William Nicholson, done by the relatively young Lighthouse Theatre in Georgetown, put a great big checkmark and exclamation point in the box for "serendipity."

I'm constantly baffled by the audience divide between big-budget shows, including especially those trooped into town by national touring companies, and the magic of work performed in small venues, public spaces, and church halls. Theatre is conjuring, in a sense, and the devotion and inspiration of those truly caught up in interpreting a challenging work can be riveting, as is this piece performed over two weekends in the activity hall at Crestview Baptist Church.

This is the Lighthouse Theatre Company's fourth production in two years, following Archibald MacLeish's J.B., the Steven Schwartz musical Godspell, and a dramatization of the Nazi imprisonment of Dietrich Bonhoeffer, The Beams Are Creaking. Beckett's Waiting for Godot is planned. The lighthouse, a symbol for searching the dark, is an appropriate logo, for the company has to date consistently examined questions of faith and human connection. Shadowlands continues those inquiries.

Nicholson's piece depicts Oxford don C.S. Lewis (yes, the Narnia man) in late middle age, a confirmed bachelor who's shared a flat with his brother Warnie for the past two decades. That staid, steady environment is the base from which Lewis pondered questions of Christian faith and penned the Narnia books. The series was popular for the imaginative adventures of their child protagonists, and the books have been sources for apparently endless adaptations. CTXLT has recorded six productions of The Lion, The Witch, and the Wardrobe over the past ten years, at venues ranging from Austin's Zach Theatre to the HCAF Point Theatre in Ingram. That count includes the one going up in November at the Sam Bass Community Theatre in Round Rock.

Into Lewis's phlegmatic existence, characterized by study, writing, and pipe-smoking, beer-drinking gatherings with other old boys at the local pub, comes a fan, an outsider, a brash American woman named Joy, with her young son Douglas. Despite brother Warnie's harrumphing, Lewis receives her with genteel courtesy. The first half is a quiet comedy about the irresistible force and the immovable object; the later sections depict this strange pair's growing mutual admiration, a faux marriage to allow her residency in the United Kingdom, and a lengthy, bittersweet coda of affection in the face of life's end. 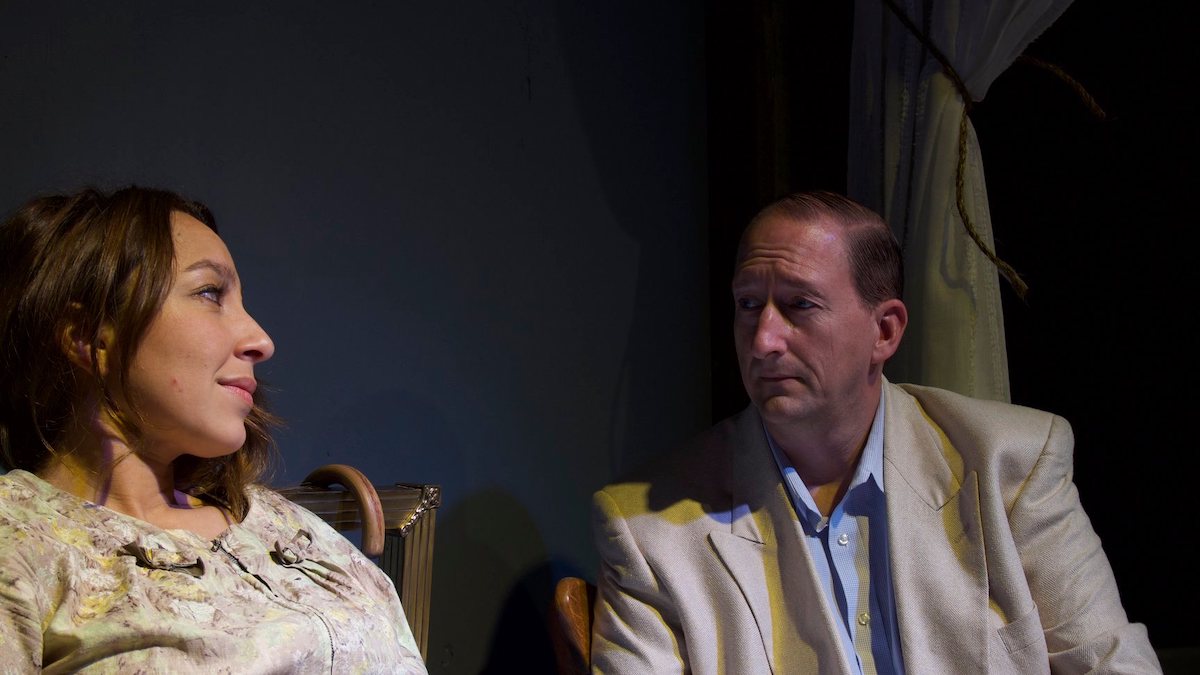 The acting space, tailored to fit the long rectangle of the church activities hall, is extremely broad and features three well-defined acting areas: the Lewis digs at the center, the pub to the audience's right, and an ominous, unlit hospital bed to the far left. A wooden railing between front and rear of the Lewis set partly masks upstage action in some scenes. Lighting is acceptable though not dazzling either aesthetically or literally, and the lighting design shifts our attention from one to the other as needed. In addition, the odd, half-lit space that would be an apron if this were a real stage, serves as an outdoors and a place for Lewis to pace, think, and comment about the implications as the story moves forward. 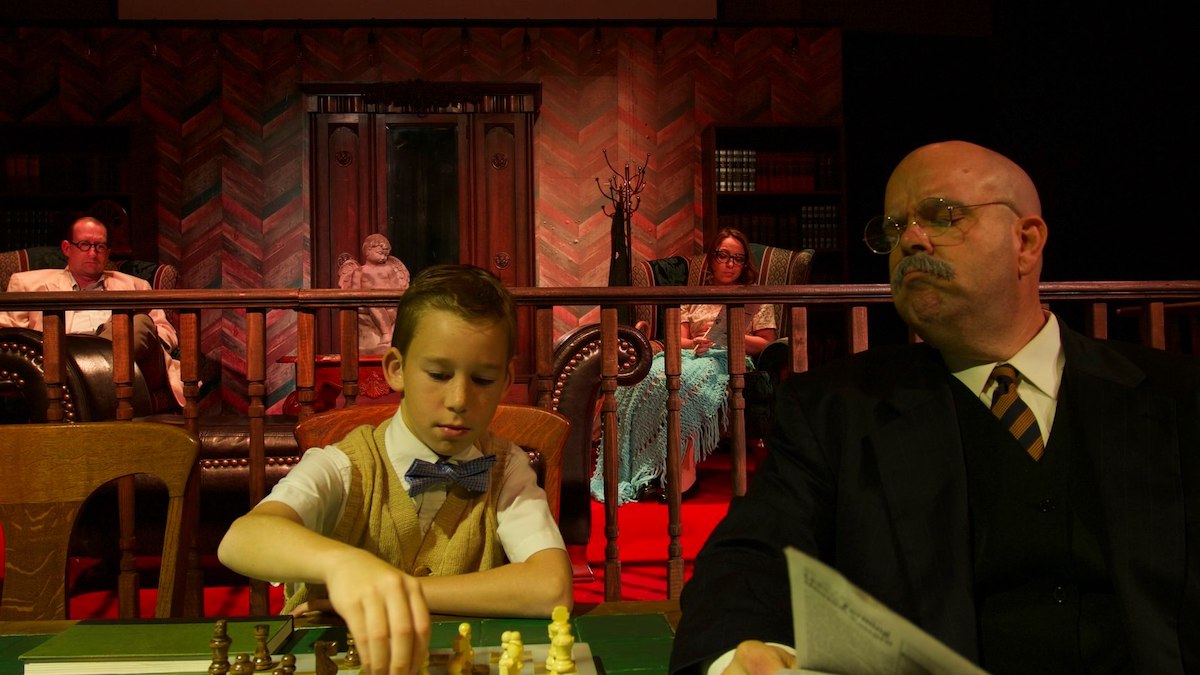 Craig Sowell as Lewis moves and speaks with the brainy awkwardness one would expect of a professor. His monologues and dialogues are precisely paced and delivered in a credible English accent. He makes Lewis serious and thoughtful, while retaining the naivite of a public school boy. His performance isn't one of bravura; it's better than that. Sowell wins his audience with subtleties and focused concern. Opposite him Blanca Gomez gives Joy an inhibited New York feistiness, all the more endearing because her petite form is almost dwarfed by Sowell's gentle bulk.

Nick Wigg wth his bald pate, pursed lips, and wire-rimmed glasses, is a nice counterpart to his more famous brother, whom everyone addresses by the childhood nickname of "Jack." There was just a touch too much of Colonel Blimp for my taste, with occasional huffing and puffing. Personally, I'd have seen the former army major as a tougher, more brusque presence. Wigg's scenes with Joy's son Douglas show Warnie at his best, kind but quite uncertain how to reach out effectively. 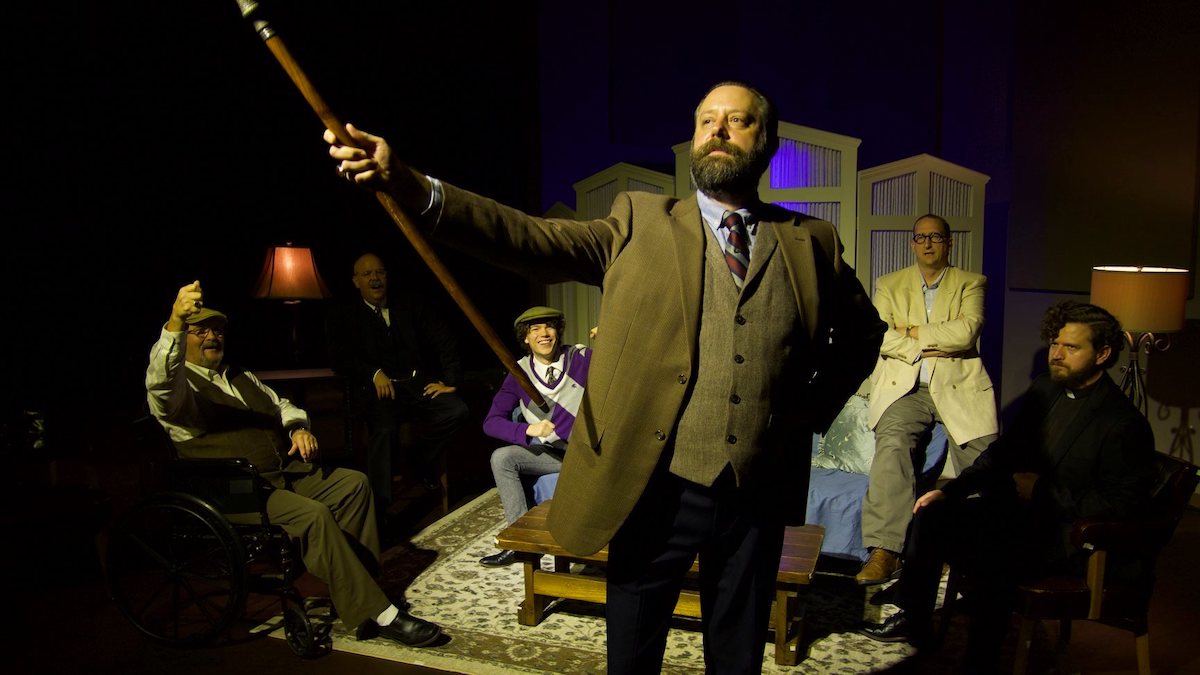 The scenes at the pub with an assortment of Oxford locals, apparently all just as unmarried as Lewis but a good deal more quirky, made me ponder whether playwright Nicholson was padding out his script a bit. Johnny Revicki as the blithely offensive Christopher doesn't quite overcome the character's sneering side, but he has several very good moments. The playwright's portrait of the Anglican priest is surprisingly unkind, giving him arguments, including Catholic ones, against the proposed marriage; Clayton Brooks is earnest and well spoken, doing with the character as much as he's allowed by the script.

Solemn young Matthew Sowell is a bit awkward at times with all these grownups, as any young man would be, but he holds up his end in dialogue, especially in the more pensive exchanges with C.S. Lewis toward the end as they face together the uncertainties of a bleak future.

That brief inventory of most of the cast neglects one thing: the effectiveness of the presentation of this story. Given the course of events, a poor handling of the script could turn it into bathos. Director Chase Wooldridge avoids that by balancing that English reserve against American emotiveness, but his cast solidly grips the emotions of the audience. During key scenes around that ominous hospital bed, I distinctly heard choked weeping in the audience.

Thanks to Lighthouse for bringing the power of dramatic art to audiences who may not be familiar with it, and thanks to Wooldridge and company for the artful telling of a story that resounds still today in our all too secular world.

Click to view the program leaflet of Lighthouse Theatre's Shadowlands. 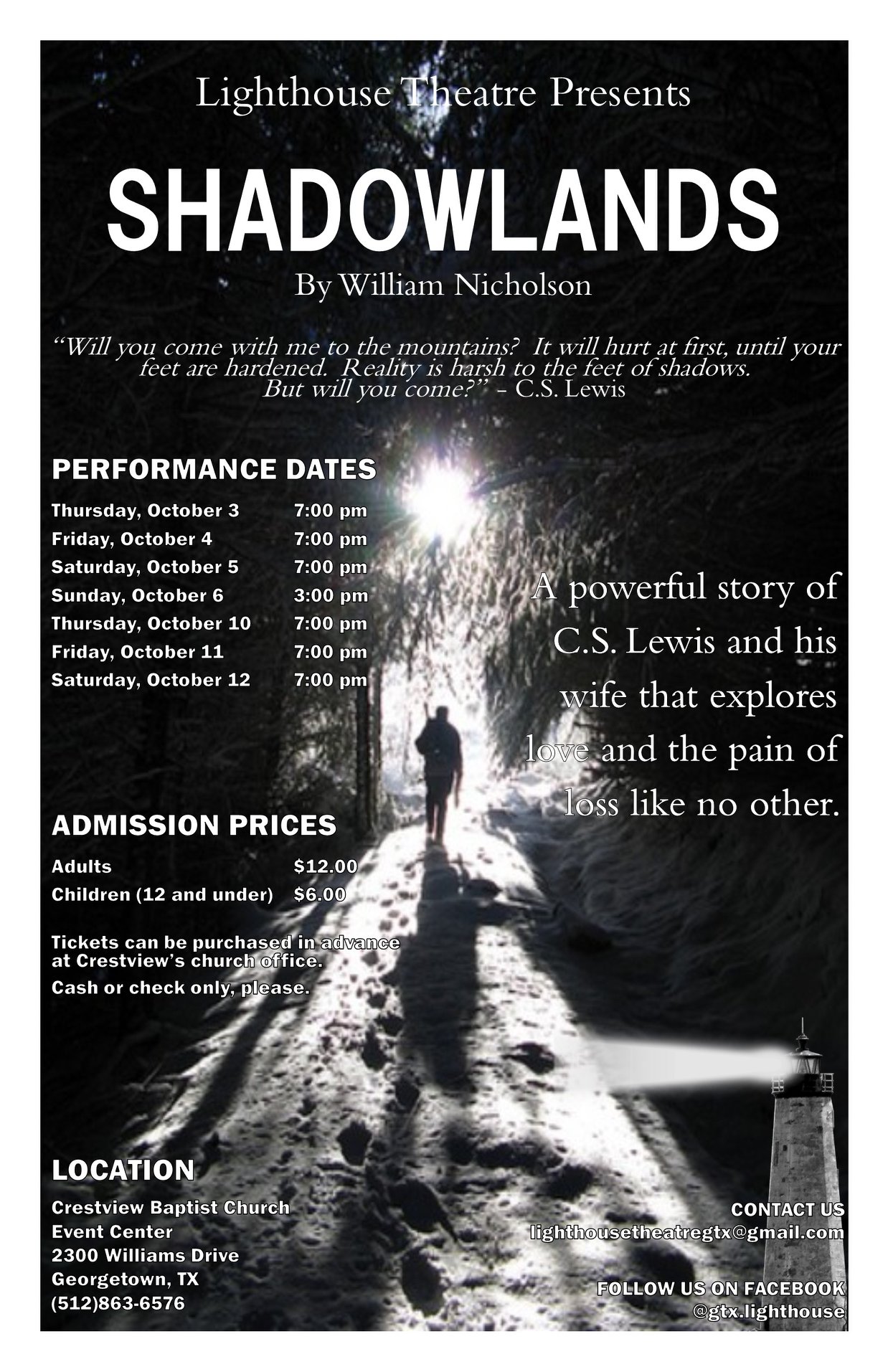