Review: The Children by Jarrott Productions
by Michael Meigs

Darkness hovers over the plot, the set, and the concept of Lucy Kirkwood’s The Children, mounted appropriately in the Trinity Street Players’ black box theatre on the fourth floor of First Austin, a Baptist church. Jarrott Productions’ choices for this space have consistently taken the moral focus of those hosting institutions. No, not the theology. Kirkwood’s script, like many other productions in this space, examines the human condition and difficult choices facing responsible individuals as members of society. 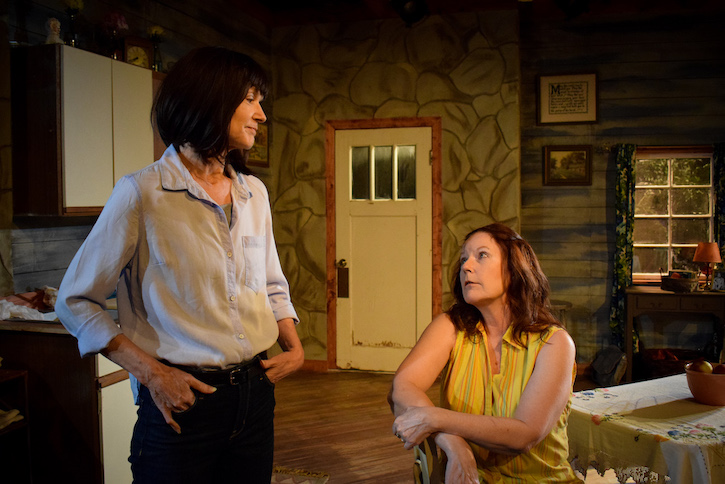 The opening presents us an isolated cottage somewhere along the east coast of England. There’s no electricity. Late-afternoon yellow and then purple dimness dominate the snug interior. A thin woman stands by the front door, face and blouse bloodied, while another bustles around in busy chatter. Though we don’t get the literal blow-by-blow, it turns out that Rose, the visitor, loomed up unexpectedly behind Hazel, who must have lashed out in panic.

Katherine Schroeder’s Hazel, the wife living in this cottage, talks up a whirlwind of apology and confused hospitality to make up for that error. Rose didn’t announce her arrival, for phone coverage is down and electricity is so infrequent and expensive that Hazel and her husband Robin don’t use the computer. The playwright has imaged a Chernobyl- or Fukushima-type accident at the nearby nuclear power plant where the couple were once employed, and they’ve had to leave their home and farm mouldering in the exclusion zone. The cottage, owned by a distant cousin, is a refuge or perhaps simply a den, a place to pretend they're living a normal life. 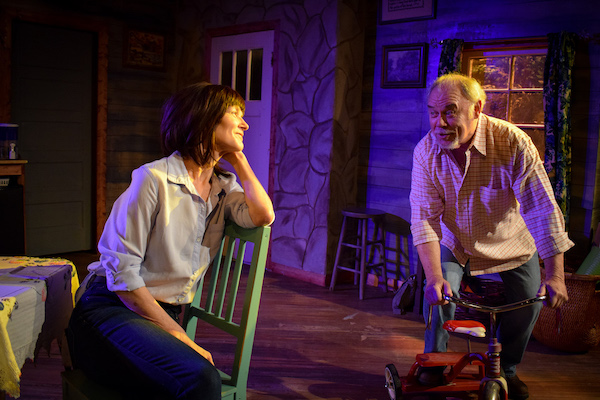 This setting is dislocation rather than full dystopia. Kirkwood, quoted in the program, writes that her theme is the failure of society to make the changes required by climate change. A laudable intention, but not exactly the focus of this piece. The thread of this story of retired scientist-technicians doesn’t directly address the long agony of our environment. By depicting the effects both physical and spiritual of a catastrophic nuclear failure caused by design flaws, the playwright subtly suggests the triviality of individual human concerns, as well as the prospect, though not in so many words, that the sins of the fathers will in fact be visited upon the children even unto the third and fourth generation.

As you might expect with the sudden appearance of an unmarried woman colleague from thirty years earlier, there's some murky background to explore. There's also a lot of catching up on individual history and on life stories of acquaintances. And of course on the children. Both Hazel and Robin's daughter, now 38, and the young -- painfully young -- workers who've been brought in to do their best to remediate the radioactive mess only miles from the supposedly safety of this cottage. Radioactivity is such a constant threat that Robin keeps a Geiger counter on the desk and checks his exposure after spending long hours each day wandering through the countryside. 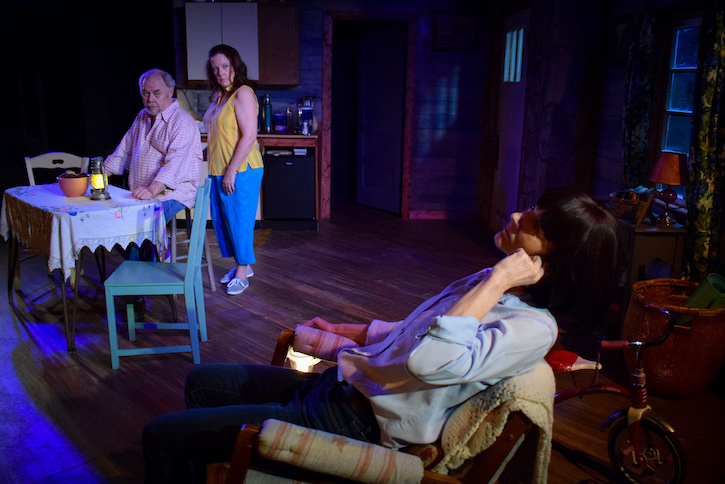 The language is acceptable UK received pronunciation, thanks in part to coaching by Amanda Cooley Davis. Shroeder's voluble commentary as Hazel is that of a flustered but strictly courteous matron, while angular Pamela Francesca Christian lingers on, relatively short-spoken as the uninvited guest. Rose spent the past thirty years in the United States but has retained her English vernacular. David Jarrot as the amiable, late appearing Robin has more mid-Atlantic in his speech patterns than she does. His Robin is by turns avuncular, would-be roué, dutiful spouse and stoic contemplator of mortality.

Homemade wine, a sparse dinner of salad scarcely touched, Robin's handsy nostalgia when his wife is out of the room, plumbing problems; there's an elephant in this room.  Rose will eventually raise the subject, and it will involve a moral choice for each of them. 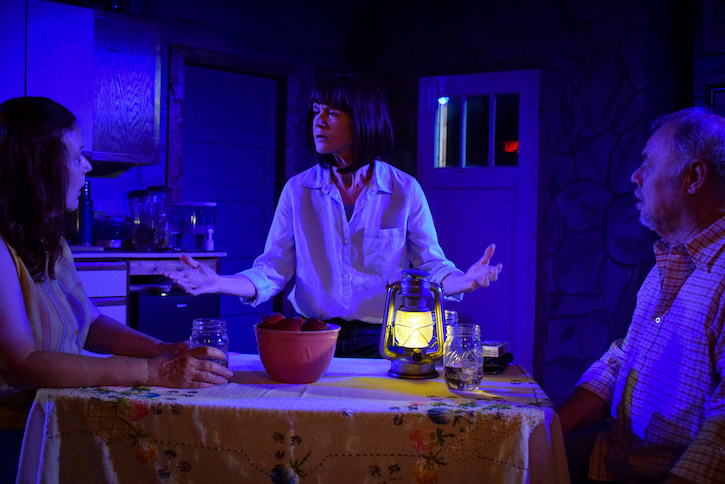 Lots of hands  prepared the smooth performance of opening night. Director Carlo Lorenzo García co-designed the meticulously detailed set with Michael Krauss, and Alison Lewis's lighting enhanced the mood throughout.  The Children offers, once again, evidence of Jarrott's discerning taste in contemporary drama. By taking us away into these characters' isolation, this production brings us very much back into the human fold.

Click to view the program for The Children by Jarrott Productions

Cick to go to ticketing page. 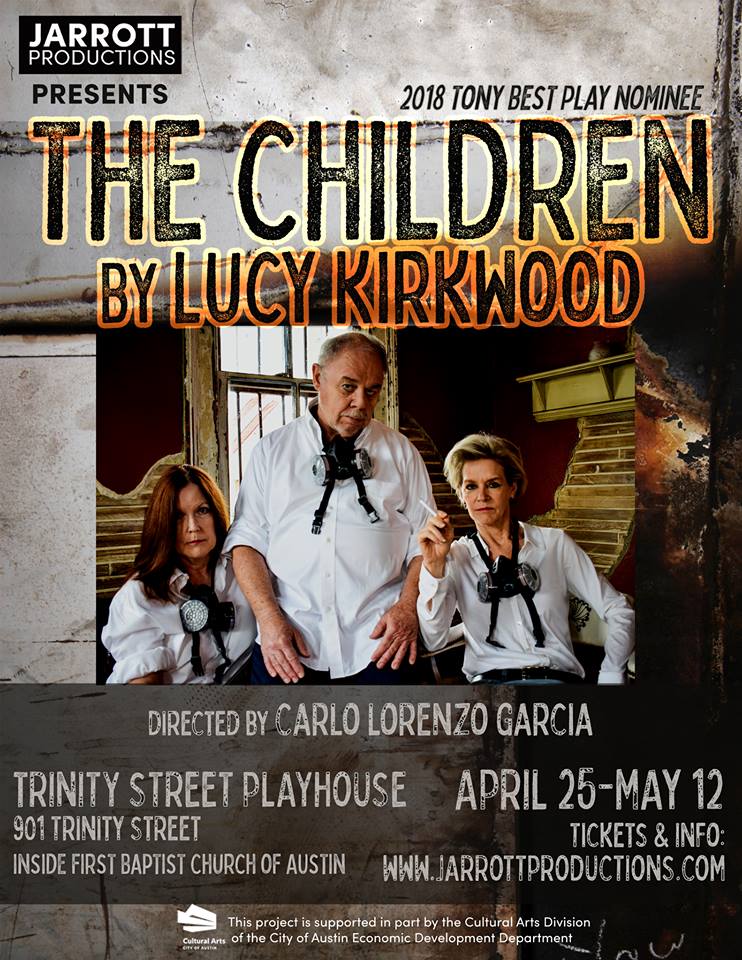