Review: Sunday in the Park with George by Zach Theatre
by Michael Meigs

The Zach Theatre's staging of Stephen Sondheim's 1984 musical Sunday in the Park with George offers a tempting treat. Sondheim's oeuvre is extensive and varied, and I've had the opportunity to sample it only from time to time. Of course there are the most popular pieces, including West Side Story with Bernstein, A Funny Thing Happened on the Way to the Forum, and Into the Woods with James Lapine, so familiar that they now seem obvious; and then there are the moody and strange wonders such as A Little Night Music based on Bergman, Sweeney Todd The Demon Butcher of Fleet Street, and the astonishing, disturbing Assassins (staged last year by The Theatre Company in Bryan and opening tomorrow at The Public Theatre in San Antonio).

I had never seen Sunday in the Park with George, although I was familiar with Seraut's massive pointillist painting A Sunday Afternoon on the Island of La Grande Jatte. It's on display at the Art Institute of Chicago, where it's practically a destination for pilgrimages; in fact, not too long ago a close acquaintance staged her 'flash' civil wedding in front of that shimmering summery scene without notifying the museum authorities. 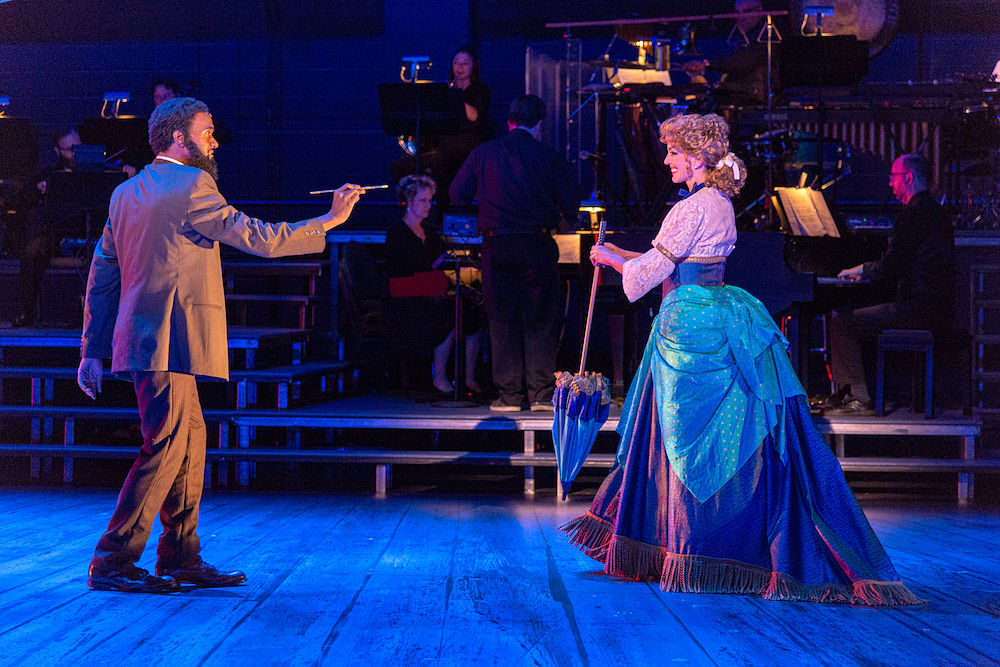 Artistic director Dave Steakley makes this production an explosion of sound and image. The Zach applies its talents and vast resources to fill that virtually bare stage with a work so intense that it verges on an experiment in synesthesia. Its wide and deep main stage is revealed virtually bare, except for some dark risers in the central depths where the black-clad orchestra members take their places. Act I evokes Seurat's mostly mute absorption in the creation of the painting, filling in details of his short life through the words of Dot, his principal model, and a miscellany of French bourgeois citizens who will eventually wind up forever on that immense canvas. 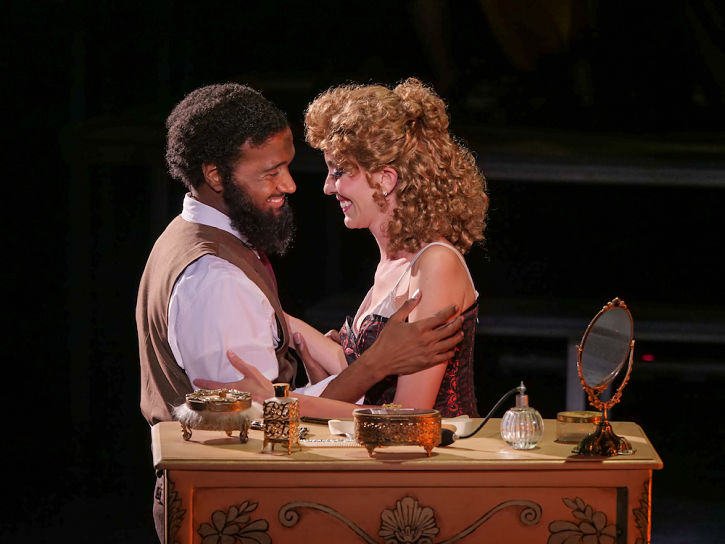 Austin favorite Jill Blackwood sings the role of Dot, filled with longing and vulnerability. Cecil Washington, Jr., displays enormous range over the course of the production's two acts. In the first act he establishes Seurat's calm, fierce dedication to his newly invented style, a combination of optics and visual inspiration, portraying the artist's mixture of concentration and complete distraction from the world of human relations and pleasures. In a swift, surprising instant ("The Day Off")  as Georges imagines the world from the perspective of a dog in the park, Washington bounces, twists and turns in frisky abandon. In the second act Sondheim and Lapine move the action to the present -- that is, 1984 -- and the protagonist becomes a different George, the great-grandson of Seurat. Washington's manner, physical stance, and delivery are so remarkably different that he gives the impression of a different person entirely. The deep indifference to outsiders of the 1884 Georges is replaced by a diffident, nervous and undecided George.

Sondheim's melodies are complex, and you probably won't be humming any of them on ther way out of the theatre. But that very complexity of concept and delivery offers deep delights in the first act. Lapine's book is relatively facile, for he imagines back stories for the figures seen on La Grande Jatte, many of which provide exaggerated comedy in counterpoint to Georges's indifference and Dot's unhappiness. 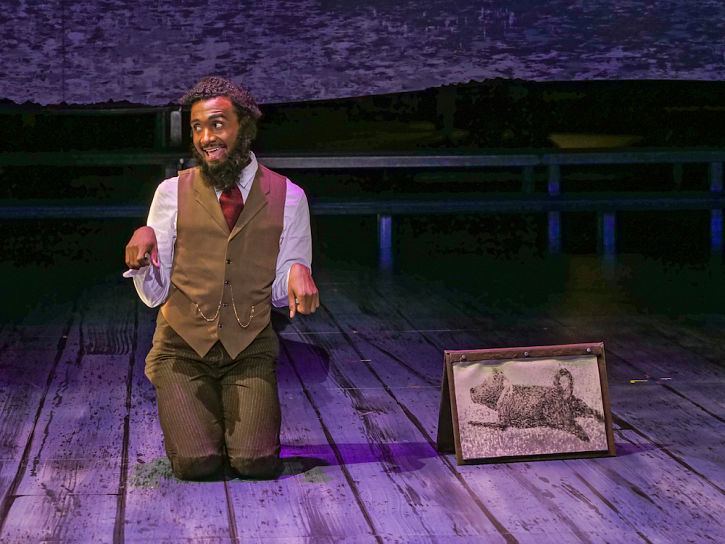 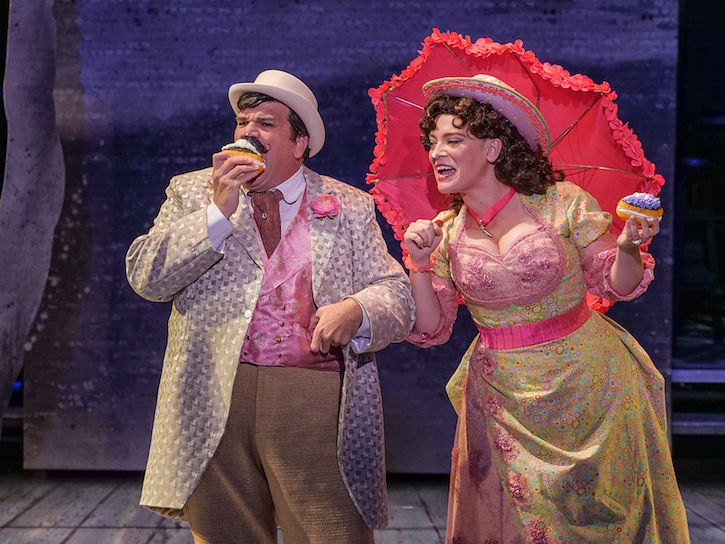 Brian Coughlin and Amber Quick parody the worst of dumb American tourists; a couple of soldiers (Connor Barr and J. Dylan Gibson) fall into conversation with a couple of dizzy demoiselles (Sarah Marie Currie and Amanda Clifton); Jamie Goodwin struts as a bourgeois gentilhomme while Amy Downing as his wife minds propriety and their daughter Louise; Janis Stinson's gifts are largely hidden as she grumps her way through the role of Georges' elderly mother; the same is true of Paul Sanchez as the affable baker who takes Dot to America. Tyler Jones is a German-accented servant and Laura Wright is his dutiful wife.

The first act will close as Seurat arranges that constellation of characters to match the imaginings of the painting. Visual, musical and mimetic representations mingle; actors voice dismay of the sketches of characters captured forever in the canvas. Dot stands at stage left, in profile, holding a parsol, wearing that hat -- just right at last -- and holding the leash of a pet monkey. 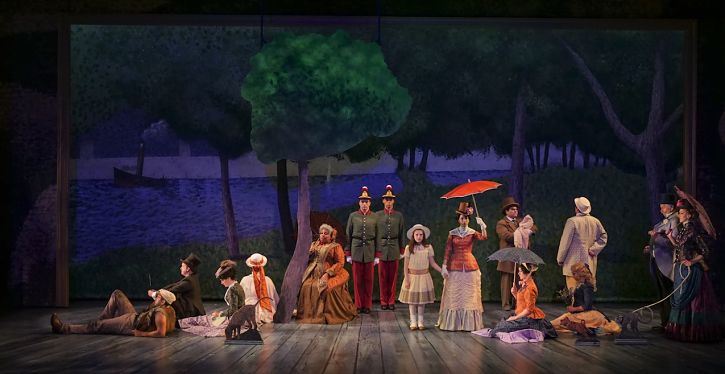 Action leaps forward a hundred years during the intermission. Actors shift into new characters. The first-act theme of the artist's obsessed vision gives way to that of the artist floundering for inspiration and dependent upon patronage from the privileged and from institutions, including the government. Though there's a message here, the piece slips from the sublime to the -- if not ridiculous -- obvious. Washington's transformation into the uncertain George is appealing; Blackwood's reappearance as his 98-year-old grandmother is not. One almost expects her to fling off the white wig, glasses and housecoat and strut like a showgirl. That extensive cast files through as modern-dress support, though eventually they revert to the characters seen on the island of La Grande Jatte. Blackwood appears again as Dot, the quietly patient youthful model and potential great-grandmother, speaking to the artist beyond space, time and imagination. 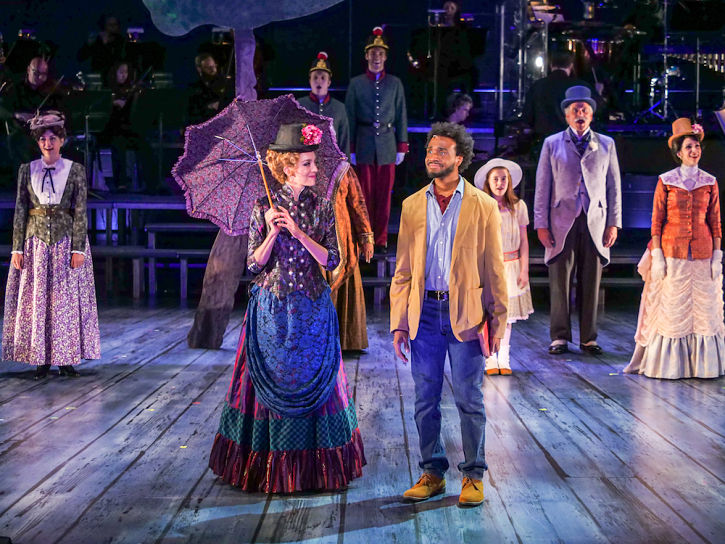 Stephen Sondheim was certainly qualified to meditate upon the tribulations of the individual artist. He has preserved his own gifts throughout his long career, despite the intrusions and the afflictions of working in a medium dependent upon patronage, sharp-eyed Broadway angels, and the dubious taste of the general public. The first act of Sunday in the Park with George would have been a triumph if left alone; it's as if Sondheim and Lapine felt obliged to extend stage time with act two to fill an evening and to explain to the groundlings the trials involved in delivering art to them.

Sunday in the Park with George
by Steven Sondheim
Zach Theatre 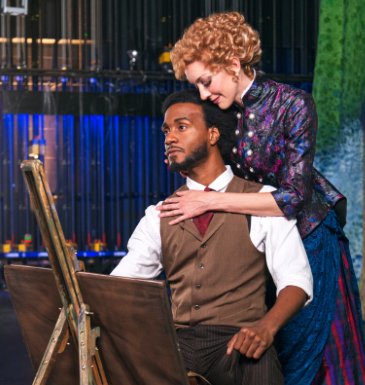 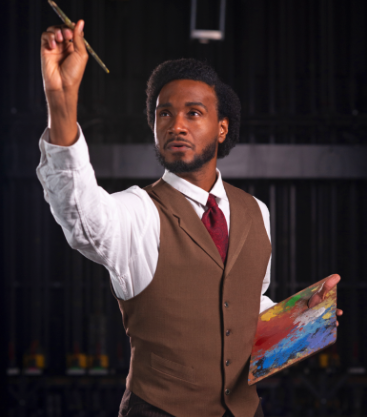