Hir by Taylor Mac is a monster of a play.  When the first images of the set and the figures standing on it strike the audience, the observers suddenly have bilious feelings, the kind that lead to nausea, rubbing the stomach, and holding nostrils closed against stale, unkempt apartment odors and bodily ooze. At first one thinks this is monstrous rather than a monster, in the sense of having overwhelming scope with lessons of great significance. But then the four characters begin revealing themselves in tight, crisp images and dialogues; and then we relax, knowing it is the latter. 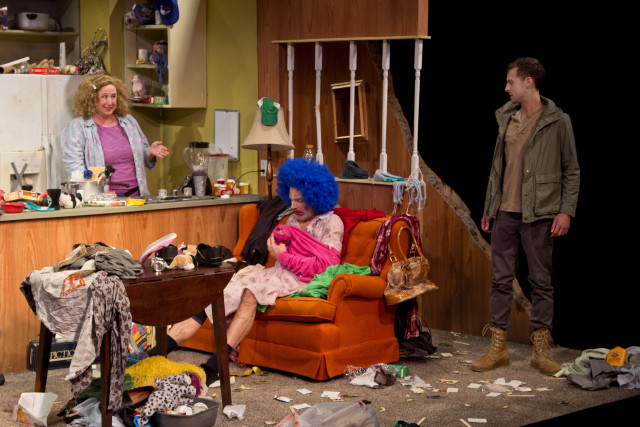 This latest production of Capital T Theatre is where Sartre’s existentialism meets T.S. Eliot’s “The Wasteland,” and it is set emotionally the day after Sam Shepard’s True West. The set’s radical transformation makes the comparison especially apt. Everyone loves a revolving mobile set, and scenic designer Mark Pickell (also the artistic director of Capital T) has done an excellent job of depicting dilapidation, interior and exterior, right down to the Killer Joe-esque cutaway. The running crew of Pearson Kashlak and Kyle Hurley operates the set to muscle-straining perfection. Patrick Anthony gives the entire show another of his typically imaginative lighting designs. 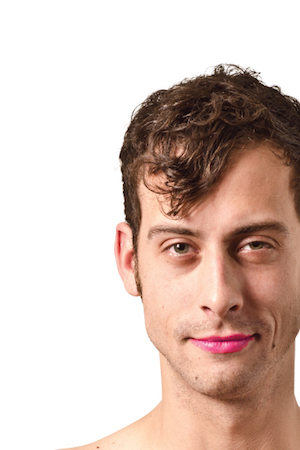 But even apt comparisons only go so far. Shepard deals in fantasy landscapes and how they mold or destroy the mind, while Mac’s play begins in interior landscapes and stays there, showing us erosion and devastation from multiple sources. Apparently, the white middle class must erode heavily before we enter the golden age of gender liberation; and such things as the Marines, brain-hemorrhaging strokes, and fundamentalist Christianity must disappear entirely before then.

All the above is a partial mix of the play-stuff in Hir. Isaac, portrayed by Nate Jackson, comes home from the Marines after receiving a dishonorable discharge for combo sex/drugs misbehavior. His sole Marine legacy is a tricky vomit reflex triggered by any high-pitched whine such as that produced by the blender in which his mother Paige (Roxy Becker) mixes the chyme-looking shakes laced with sedatives she feeds her husband Arnold (Jay Byrd). When Paige finds out about Isaac’s alt-queasy stomach, she gleefully tortures him with near-constant shake-making.

Paige’s greatest tortures are visited upon Arnold. He has suffered a debilitating stroke, and as his caretaker, Paige keeps him sedated against his will and dresses him in adult diapers, ladies’ house dresses, clown make-up, and a blue clown wig. This costume gives us our first view of Arnold. We see Paige’s raging hostility as revenge for a marriage of emotional and physical abuse by Arnold, and now she turns the tables. With that she declares housework at an end.

The younger child, Max (played by Dillon Yruegas), is transgendered, post assignment surgery and adjusting to his hormones, or ‘mones.  The core of the play’s comedy is invested in Max, who insists that everyone get their gender politics terminology straight, especially the pronouns. Of course, nobody can do that, Max least of all. 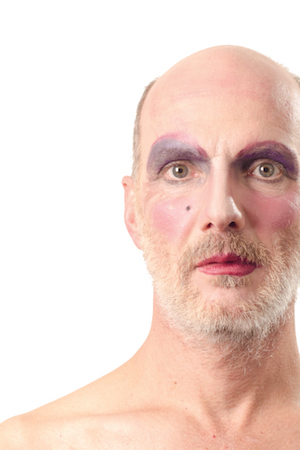 Given this range of personalities, the play is nothing but fireworks, and the excellent cast under the direction of Delante G. Keys lights fuses and throws their cherry bombs and M-80s everywhere. The performance heart of Hir, however, is Byrd’s Arnold, and in this core sense the play belongs to Jay Byrd. He plays a man with a brain damaged by a stroke, and he conveys the disability and pain from the beginning to the end of the play, solidly and without missing a single semi-controlled gesture. Though silent, he struggles to mutter a few lines, including the classic, “My penis is my best friend.” He spends most of the play in the fetal position. To accomplish so much as an inarticulate, disempowered character vaults Jay Byrd to the massively empowered status of an acting titan. Very well done, Jay Byrd.

Thus Hir plays itself out with plenty of surprises. Redemption seems not to be a structural theme of twenty-first century plays so far, and Hir is no exception. But pointing out what the present lacks and is not, against our prevailing mythology, in a way directs us toward possibility--what can be if not this?--and toward a brighter future. Roxy Becker lays it all out in a flat, quiet voice in her speech at the end of the play. And she points us straight across the wasteland, no signposts or lane striping anywhere.

Theatre aficionados should flock to this play by the red-hot Taylor Mac.  They will be well rewarded by their attendance.  Hir is not for the faint of heart. All such should depart in search of a lingering Christmas show. Hir plays now at the Off-Center, 2211-A Hidalgo in east Austin, January 5-21, 2017.

Mark Pickell, the gifted and ingenious founder and artistic director of Capital T Theatre, has a way of getting up my nose.

He has a keen appreciation for the contemporary genre loosely labeled 'black comedy': plays that feature strange people acting in weird ways, often as not at the end of their ropes, figuratively if not literally. I like a good dose of tangy cyanide from time to time, also, particularly if the work is sending up our good middle class and its hypocrisies.

What I do not care for is drama or comedy that mocks and belittles the poor, uneducated and disadvantaged. Taylor Mac's HIR does that with a vengeance.

Lean, morose Isaac turns up at a ramshackle structure. Dishonorably discharged from the Marines for drug use and misconduct, he's looking for home. Not the tacky, cobbled-together crummy house that his father fixed up during Isaac's childhood, but Home, the place where when you go there, they have to take you in. What he finds is a mess. No, more than that: a disaster, a catastrophe, a nightmare of family distorted and transformed. HIR is a white trash version of hell. 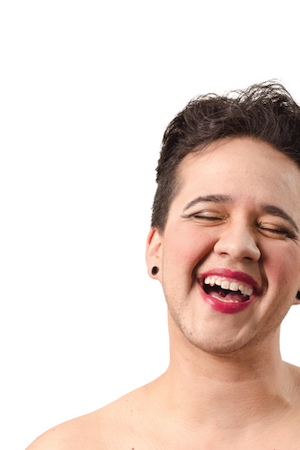 Issac's father Arnold is a slobbering, gibbering, pathetic mess, reduced by a stroke and by the vengeful treatment of his wife Paige to a man-sized painted kewpie doll. Jay Byrd gives us in Arnold a full evening of life of no dignity and very little comprehension, stumbling to follow instructions and only occasionally managing to mumble single words. We learn soon enough from Paige's sneering hateful comments that when he was in his right mind he was an arrogant macho monster. Roxy Becker as Paige is a large woman who's even larger than life. Paige rails in her own active dementia, living large with no income other than a fraudulent non-profit and parroting manic liberal views that would be anathema to any right thinking conservative God-fearing underclass woman.

Isaac's sister Max is no longer female.  Dillon Yruegas portrays a confused, oppressed, pathetically self-obsessed being lost somewhere along the axis between the poles of male and female.

The arc of the piece is Isaac's effort to connect with these grotesque stereotypes and to put some order into their claustrophobic world. His nemesis is his mother, adamant, angry, and ultimately completely in control. Paige renounces him along with everything else. She has no sentiment, no love -- she is simply appetite, vengeance and greed for power.

It's not a comedy. From time to time strangled yelps of laughter could be heard in the audience, of the sort that replaces exclamations such as Oh my God I can't believe he/she/ze said that. . . .

Director Delanté G. Keyes helms this one through Capital T's 'New Horizons,' a program to provide a professional directing credit for aspiring theatre artists. Keyes elicits convincing performances from a capable cast, a feat that makes this basket of deplorables that much more pungent. Production values are solid. The mobile set has the curious effect of creating a stationary house that's manipulated and revolved much like a trailer home. One wonders if the house number '511' hanging askew by the front door might be a sly reference to Capital T's frequent home andcollaborator the Hyde Park Theatre at 511 W. 43rd near Guadalupe. 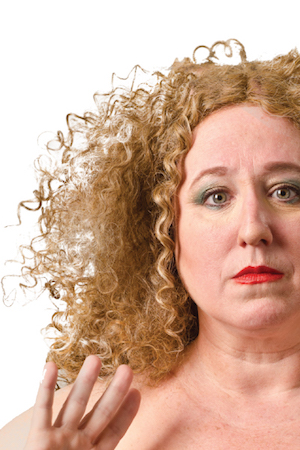 Roxy Becker is awe-inspiring in her awfulness, a malevolent force beyond all nature. And in the second act she is glorious in that polka dot dress dreamed up by costume designer Glenda Wolfe -- a marriage of little-girl fantasy and amazonian rage.

Much produced and frequently awarded, playwright Taylor Mac is unconventional to the point of using 'judy' (sic, lowercase) as a gender pronoun. One assumes that judy has an equally unconventional personal sexual identity, although that's not explained in the program notes and it isn't clear from the themes of HIR either. Yes, there's talk about using 'hir' instead of 'his' or 'her,' and the neologism 'ze' instead of 'he' or 'she'  -- but the chief proponent is mad mama Paige. The incompletely transgender character Max seems vaguely uncomfortable with such linguistic political correctness. This work is not friendly to any sexual orientation. Isaac is straight, in several senses, and his reduced father is lame, unsexed and absurd.

HIR feels like a nightmare of psychodrama -- or psycho drama -- in which the playwright is exorcising family abuse, poverty, selfishness and the ugly life of a loveless home.

Fine, if that's what Mac and his supporters want. But I see no reason for me to join him in burning down the trailer park and roasting its confused inhabitants. 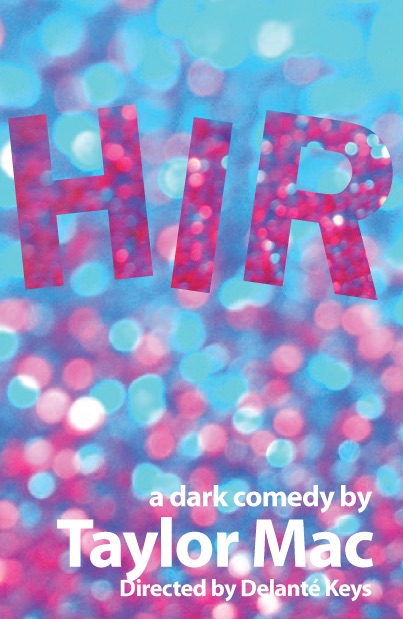 Closes with the performance of Saturday, January 21