Who Killed William Gamble Griffon, The State of Texas vs. Haywood Batey
by Bastrop Opera House

The play, Who Killed William Gamble Griffon, The State of Texas v. Haywood Batey, is based on the infamous 1883 Christmas Eve lynching and Christmas Day gunfight in McDade the trial of Haywood Batey for the murder of Willie Griffon who was killed in the gunfight. At the time, the trial was described as “the most important trial in the history of Bastrop County.” Barbara Bogart, President of the Bar Association said, “Every effort has been made to make the production historically accurate so that the audience not only will be entertained but may also learn something new about the fascinating history of Bastrop County.”

The actors in the play include District Judge Christopher Duggan who will play District Judge L. W. Moore, the judge who presided over Batey’s murder trial, Ernie Bogart as County Attorney W. E. Maynard who prosecuted Batey and Derek Van Gilder as defense attorney George Washington Jones. Also in the cast are other members of the Bar Association, performers who have appeared in other productions at the Opera House, and some new faces. The play is being directed by one of Bastrop’s true treasures, Chester Eitze.

Proceeds from the production will help fund the scholarship program of the Bastrop County Bar Association. 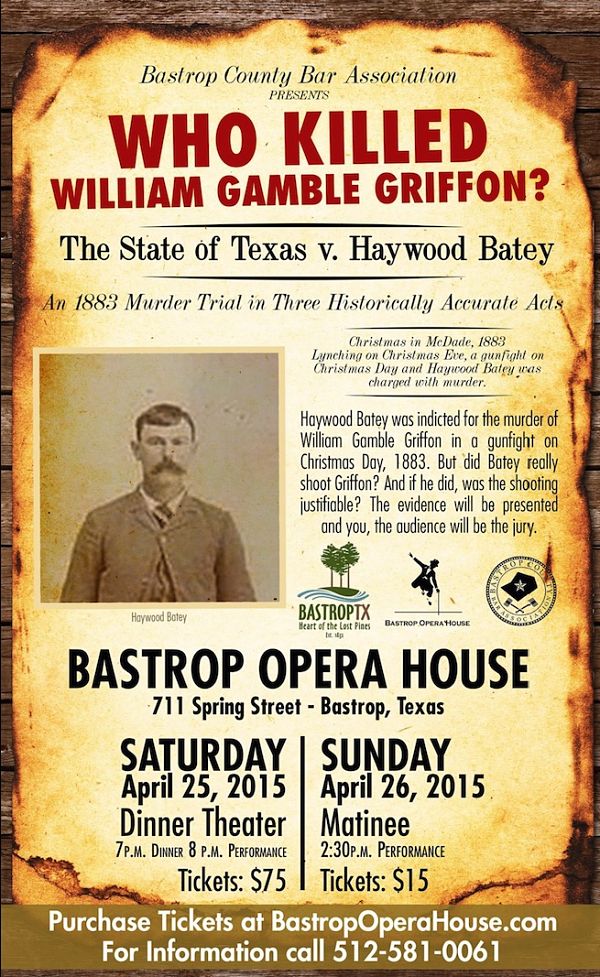