Richmond, April 1865. The Civil War has ended, and a badly wounded Confederate soldier stumbles into the ruin of what was once his home. His family has fled the city’s destruction, leaving two former slaves to wait and watch. Together they care for the wounded man, and, having adopted the religion of their former owners, celebrate Passover. They soon discover that, though they are no longer tied by ownership, they remain tied by faith and history. Deep-buried secrets from the past refuse to be suppressed as the play comes to its shocking climax. It is a story about redemption and forgiveness; about the lasting scars of slavery; and the responsibility that comes with freedom.

Stacey Glazer directs the premiere production for City Theatre. Andrew Bosworth plays Caleb, the injured Confederate soldier returning home, only to be confronted with devastation and loss. In the role of Simon, the former slave who clings to an inherited faith and the hope that his family will be reunited, is Robert Pellette. Completing the trio is Richard R. Romeo as John, also a former slave, now torn between the opportunities and responsibilities of his new-found freedom.

Rounding out the production team areAndy Berkovsky (Production Design), Tomey McGowen (Makeup Design) and Bert Flanagan (Costumes).Throughout the run, CTC will be providing numerous opportunities for audiences to engage in discussions inspired by the themes of the show. CTC is collaborating with Jewish and African-American organizations to present talks about the play following the Sunday performances. 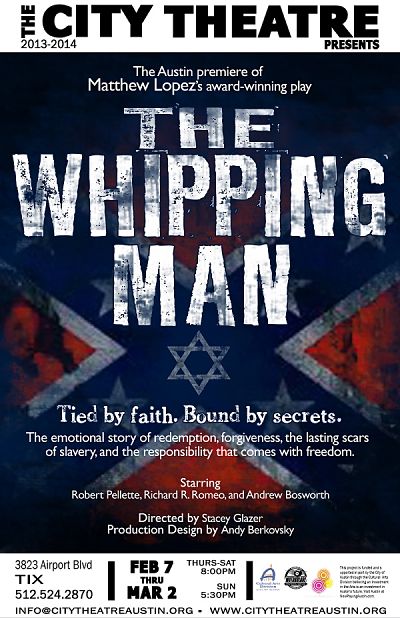