The True Story of Bonnie & Clyde
by Crank Collective

In the '30s, the newspapers loved Bonnie and Clyde. Reporters called them everything from bloodthirsty killers to modern-day Robin Hoods. Whether heroes or villains, their iconic images sold millions of newspapers to a fascinated public. The True Story of Bonnie and Clydeexplores the mix of fact and fiction in 1930s journalism that landed Bonnie and Clyde on the front pages of national newspapers.

The next installment of the Texas History Musicals, The True Story of Bonnie and Clyde–a one-hour musical created by John Cecil–tells an action-packed tale of crime and passion taken straight from newspaper reports of the 1930s. The production, which features a live band, is based on two Dallas reporters who pursue the story of the Barrow Gang and achieve flickering fame of their own. Hell-bent on selling papers, the two reporters come perilously close to the real Bonnie and Clyde. And, as the title of the opening song states, “Most of This is True.”

About Bonnie and Clyde

Bonnie Parker and Clyde Barrow were notorious outlaws from Dallas who, as part of the Barrow Gang, traveled across central United States, committing robberies and murders during the Great Depression. Their exploits riveted the entire nation in the early 1930s. Killed in a 1934 ambush, Bonnie and Clyde remain pop culture icons through movies, music and theatrical productions. 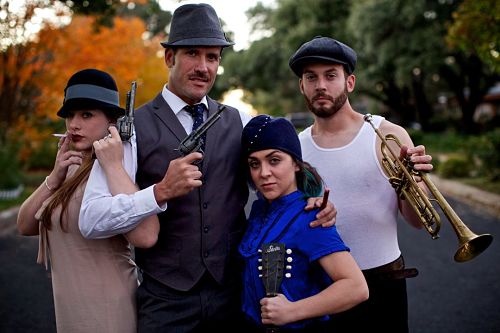 Crank Collective, led by producing director John Cecil, is a rotating group of actors, musicians and theatrical artists that has performed in New York, Prague and Bucharest. The ensemble brought ...