The Trees of Govalle
by Forklift Dance Works

Featuring the trees of East Austin's Govalle park and the hardworking Urban Forestry employees who care for them, The Trees of Govalle will highlight the care and dedication that goes into maintaining some of our city's oldest and tallest organisms. Rooted in one of Austin's oldest neighborhoods, the dance will also incorporate the Govalle-Johnston Terrace neighborhood's rich history and celebrates some of Austin's longest-standing families.
Working closely with Urban Forestry employees, choreographers Allison Orr and Krissie Martywill utilize the movement and finesse of the arborists and their machinery to create a dance highlighting the skill, commitment, and elegance that is needed to keep our city's green space healthy. During the dance, audience members will also learn about how to care for our urban forests, and upon arrival audience members will be directed to walk along a wooded path. During this walk, local arborists and volunteers from TreeFolks will offer audience members information about how to care for and maintain a healthy and vibrant urban forest.
Forklift Danceworks is thrilled to announce that 2014 National Endowment for the Arts National Heritage Fellow Manuel “Cowboy” Donley will be a featured musician in The Trees of Govalle. Manuel "Cowboy" Donley is a Mexican-American singer, multi-instrumentalist, bandleader, composer, and arranger. Donley grew up in the Govalle neighborhood and got his start playing in East Austin. Today, he is credited as pioneer of Tejano music and is known both as a bandleader in the orquesta (Tejano) style as well as the trío romántico style. In addition to being a NEA National Heritage Fellow, Manuel Donley has been inducted in the Tejano Music Hall of Fame, has received a Lifetime Achievement Award from the Emma S. Barrientos Mexican American Cultural Center in 2012, and has been honored with a community park dedication by the Austin Latino Music Association.
The Trees of Govalle will be entirely free and will be accompanied by an original musical score composed and directed by Graham Reynolds with production and lighting design by Stephen Pruitt.
Many thanks to our 236 Kickstarter backers and the following Project Sponsors and Partners!
Videos from the successful Kickstarter appeal for this project:

Saturday-Sunday,
April 11 - April 12, 2015
Govalle Park
5200 Bolm Road
Austin, TX, 78721
A free performance featuring the City of Austin's Urban Forestry Division and the trees of Govalle Park
Doors at 7 pm, Show at 8 pm
Reservations currently not available.
Sign up to volunteer for The Trees of Govalle Saturday night or Sunday night and see the show!
More tickets will be released Wednesday, April 1st. Join our email list to be the 1st to know! 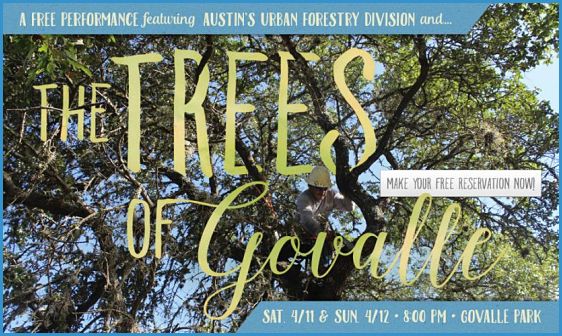