The Graduate
by City Theatre Company

I've just got one thing to say, Ben…!

These lines from The Graduate, so etched in the American psyche, are emblematic of the "advice" offered to any young adult coming of age in a world they may not be ready for. The popular novel, adapted for the stage by Terry Johnson, follows recent college graduate Benjamin Braddock's journey toward finding himself — with detours including run-ins with his establishment parents, an affair with older family friend Mrs. Robinson, and a budding romance with her daughter, Elaine. It is the age-old story of a promising young man trying to make sense of an adult world he must face for the very first time. Whether seen on film, stage, or read, The Graduate has been a touchstone for generations - representing the universal feelings of rebellion, confusion, frustration, love, and redemption.

In the early 1960s, when Charles Webb wrote The Graduate, America was in an "age of youth." Young people were leading the way to social, political, and cultural transformation. The novel was groundbreaking in those changing times and reviewers unanimously praised his comedic genius in dealing with controversial themes. In 1967, The Graduate film was released, featuring Anne Bancroft and the memorable, boyish face of Dustin Hoffman as the lost hero. The Graduate quickly became a cult favorite and an artistic triumph, garnering multiple award nominations and it remains one of the top grossing films in history. In 2000, the stage play opened on London's West End, to great critical and commercial success. It transferred to Broadway starring Kathleen Turner as the martini saturated Mrs. Robinson. Still today, fifty years after The Graduate, we all continue to ask the same question…what does the future hold?

The City Theatre Company is an Austin-based, not-for-profit arts organization and is sponsored in part by the Austin Creative Alliance and the Austin Cultural Arts Division. Founded in 2006, the company has been recognized by the Austin Critics Table Awards, the B. Iden Payne Awards, the Central Texas Excellence in Theatre Awards, Austin Live Theatre, and has twice been voted “Best Theatre Company” by Austin American-Statesman’s Austin 360. CTC is dedicated in providing quality theatrical experiences and entertainment for Austin artists and its community. This is a rare opportunity to see The Graduate professionally staged in Austin and with its commitment to making productions accessible for everyone, CTC offers its discount ticket program with $10 Thursday seats and $12 student seats for any show. The ticket discount is available throughout the 2014-15 season.

The Graduate
by Terry Johnson, based on the Mike Nichols film
City Theatre Company 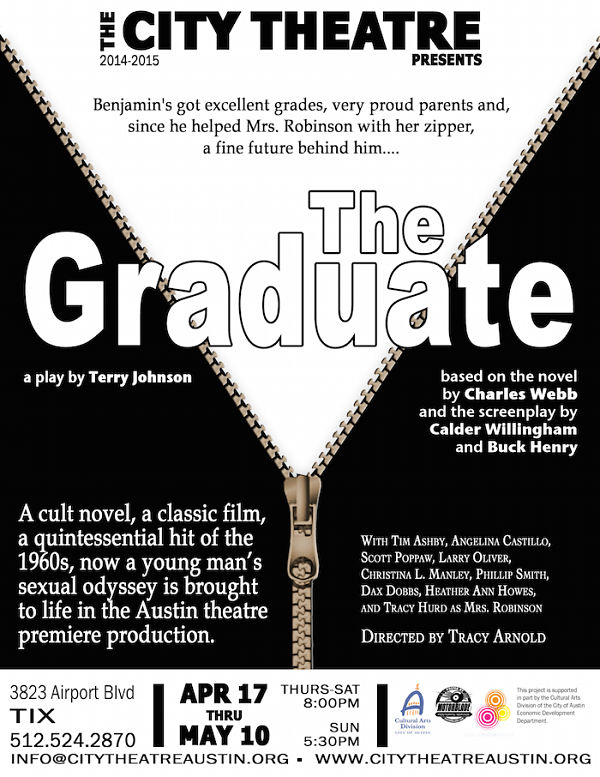