Ship of Fools: An Alibiography
by Overtime Theater

Ship of Fools: An Alibiography by Greg Barrios centers on Texas writer Katherine Anne Porter and her Mexican American biographer.  The twofer has been cast with actors Gloria Sanchez (as Katherine) and Joel Settles (as Cristóbal).

Gregg Barrios is a playwright, poet, and journalist.  He is a 2013 USC Annenberg Getty Fellow, and serves on the board of directors of the National Book Critics Circle.  He was inducted into the Texas Institute of Letters this year.  He is the 2015 Fall Visiting Writer at Our Lady of the Lake University.  His work has appeared in Los Angeles Times, The New York Times, Texas Observer, Texas Monthly, Film Quarterly, San Francisco Chronicle, and Andy Warhol’s Interview.  He is a former book editor of the San Antonio Express-News.  He has received a CTG-Mark Taper Fellowship, a Ford Foundation Grant, and a 2013 Artist Foundation Grant for his theater work.  His play Ship of Fools about Texas writer Katherine Anne Porter premieres this year in San Antonio’s Overtime Theater.  He is collaborating with actor and filmmaker James Franco on a book of his experimental work in poetry and film.

Marisela Barrera grew up on Crockett Street in Alamo, Texas. She received her BFA in Acting from Southern Methodist University. She co-founded the San Antonio Latino/a Theatre Alliance, participates with the Latino Theatre Commons, and is the QUEST Graduate Teaching Fellow at Our Lady of the Lake University where she pursues a MA/MFA in Creative Writing, Literature, and Social Justice. Her new play, Cuero, La Ruby Red y El Big Bird, ran to sold-out houses at Jump-Start Theatre in July 2015.

Ship of Fools: An Alibiography
by Greg Barrios
Overtime Theater 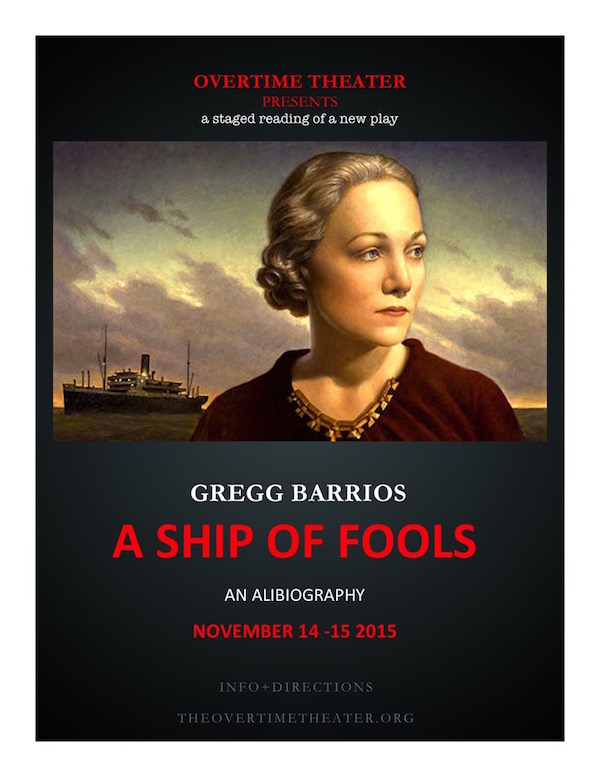