Priscilla, Queen of the Desert
by Zach Theatre

Priscilla Queen of the Desert, the Musical

Based on the Latent Image/Specific Films Motion Picture distributed by Metro-Goldwyn-Mayer Inc.

The ZACH Theatre 2016-17 season celebrates a colorful kick-off with the Olivier and Tony Award-winning musical Priscilla Queen of the Desert, on stage in the Topfer Theatre September 28 – October 30, 2016 starring JOSH DENNING in the role of Tick, JACK DONAHUE as Bernadette, and ANTHONY VINCENT TOUDJEROV as Felicia.

Based on the hit 1994 film of the same name, Priscilla Queen of the Desert is the heartwarming, uplifting adventure of three friends from Down Under who journey through the Outback in search of love, friendship, and family. With hundreds of outrageous costumes and headdresses, and a playlist of dance floor hits including “I Will Survive,” “Hot Stuff,” “I Say A Little Prayer For You,” and “I Love The Nightlife,” this fresh and funny musical is a journey to the heart of FABULOUS! ZACH Theatre’s production is directed by ZACH Associate Artistic Director ABE REYBOLD and features scenic and costume design in collaboration with Ogunquit Playhouse.

Priscilla Queen of the Desert is directed by ZACH Associate Artistic Director Abe Reybold (The King & I, Sophisticated Ladies, James and the Giant Peach) with Musical Direction by Allen Robertson (A Christmas Carol, Mary Poppins) and Choreography by Dominique Kelley (Sophisticated Ladies). STANLEY MEYER is the Scenic Designer; STEVE BAGLIO is Properties Designer; BARRY DOSS is Costume Designer with SERRET JENSEN as Hair and Makeup Designer; MATTHEW WEBB as Lighting Designer; CRAIG BROCK as Sound Designer with CATHERINE ANNE TUCKER and BRYAN BRADFORD as Stage Managers. This musical is based on the Latent Image/Specific Films Motion Picture distributed by Metro-Goldwyn-Mayer Inc. with a book by Stephan Elliott and Allan Scott.

Run Time: Approximate two hours and 20 minutes including one intermission

VISA and Capital Metro are the Leading Sponsors for Priscilla Queen of the Desert. James Armstrong and Larry Connelly are the Executive Producers and Austin Nites Party Bus is a Production Partner.

ZACH Theatre’s 2016-17 Season is sponsored in part, by AT&T, Austin Catering, Baylor Scott & White Health, H-E-B, Holiday Inn-Lady Bird Lake, Kirk Tuck Photography, Marquee Event Group, OnRamp Access, and Schlotzsky’s; and by grants from The Shubert Foundation, the Junior League of Austin, The National Endowment for the Arts, Texas Commission on the Arts, and the Cultural Arts Division of The City of Austin Economic Development Department.

Priscilla, Queen of the Desert
by Stephan Elliott and Allan Scott
Zach Theatre

Tickets start at $25 and are available online at www.zachtheatre.org, by phone at 512-476-0541 ext. 1, or in person at the ZACH Theatre Box Office, in the Topfer Theatre, 202 South Lamar Blvd. (corner of Riverside Drive and South Lamar Blvd.) Monday through Saturday, 12 noon – 7 p.m.  ZACH Theatre is wheelchair accessible.  Discounts are available for groups of 8 or more. Student Rush Tickets are $18 one hour before show time (with valid ID).

Special events in celebration of Priscilla Queen of the Desert the Musical include: 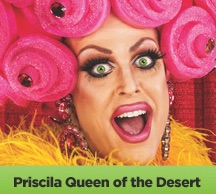