Sweet, smart and disarmingly funny, Now Then Again is a love story inspired by a paper on quantum physics by John Cramer. The paper posits that at the quantum level, not only does the past affect the future, but the future affects the past. In Now Then Again, we watch as the lives of the main characters unfold into the past and future simultaneously.

Now Then Again debuted in Chicago in early 2000. After four weeks of packed houses in its original 50-seat venue, the show moved to a theatre ten times the size, where it continued its run for a total of seventeen weeks. That year, the show received four nominations at Chicago’s prestigious “Jeff” Awards and took home the prize for Best New Play.

Now Then Again was adapted into a film in 2005 and won the Sloan Prize at the Tribeca Film Festival. Before that, the play was performed for what might be its most difficult audience: the world-class physicists at Fermilab where the play is set. Leon Ledeiman, the Nobel Laureate, Fermilab Director Emeritus and author of The God Particle, called the play “A very provocative and surprising play about time and the eternals of love, chance and humor.” 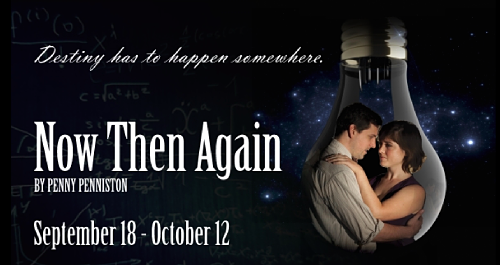