Medea, having betrayed her family and country for her captivating but arrogant husband Jason, takes revenge against him when he abandons her and their two sons for power and a younger woman.

Wikipedia: Medea (Ancient Greek: Μήδεια, Mēdeia) is an ancient Greek tragedy written by Euripides, based upon the myth of Jason and Medea and first produced in 431 BCE. The plot centers on the actions of Medea, a barbarian and the wife of Jason, she finds her position in the Greek world threatened as Jason leaves her for a Greek princess of Corinth. Medea takes vengeance on Jason by killing Jason's new wife as well as her own children with him, after which she escapes to Athens to start a new life.

Considered shocking to his contemporaries, Medea and the suite of plays that it accompanied in the City Dionysia festival, came last place in the festival that year.[1] Nonetheless the play remained part of the tragedic repertoire, and experienced renewed interest with the emergence of the feminist movement, because of its nuanced and sympathetic portrayal of Medea's struggle to take charge of her own life in a male dominated world. The play has remained the most frequently performed Greek tragedy through the 20th century.[2]

Opens Thursday, Mar. 5 2015,, and it runs through Sunday, Mar. 8. All performances will be in the PSH Foundation Studio Theatre Individual tickets start at $15 for adults and $8 for students, and may be purchased by phone at 512-245-6500 or online at txstatepresents.com. 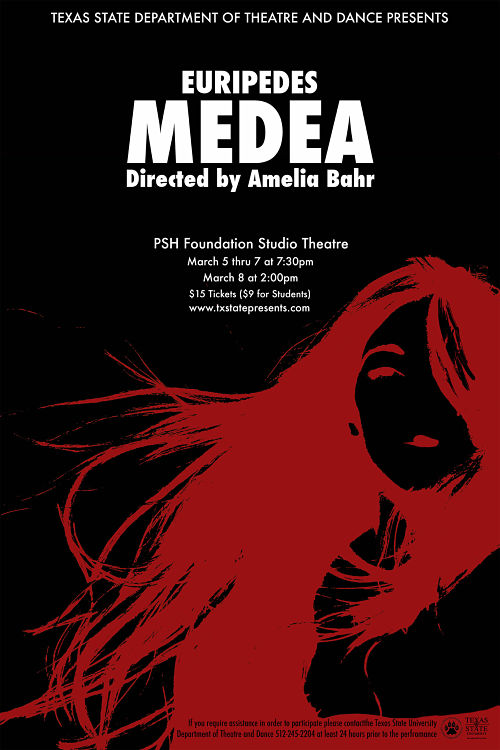