Guys and Dolls
by Tex-Arts

An all-new sizzling production of the Broadway musical comedy classic GUYS AND DOLLS opens August 14, 2015. With its unforgettable songs by Frank Loesser including "Luck Be A Lady," "I've Never Been In Love Before," and "Sit Down Your Rockin' The Boat," this show features a cast of gamblers, gals and gangsters. Fun for the whole family, GUYS AND DOLLS is musical entertainment you can bet on!

Music and Lyrics by: FRANK LOESSER

TexARTS presents the Broadway classic “Guys and Dolls” for the second production of the 2015-16 professional series. Gathering the best central Texas talent and veteran Broadway leadership, TexARTS will bring the spark and glamour of 1940s New York City to the Kam and James Morris Theatre.

At the helm is director Kasey RT Graham. Graham comes to TexARTS after serving as associate director of the Tony-nominated Broadway revival of “On the Twentieth Century” starring Kristen Chenoweth and Peter Gallagher.

“We are so fortunate to have a director of Kasey’s caliber lead this production,” Jarret Mallon, TexARTS executive director, said. “Classic Broadway musicals are his forte and we are excited to realize his vision on the TexARTS stage.”

“Guys and Dolls” is considered the quintessential Broadway musical, and no production would be complete without Frank Loesser’s beloved songs like “A Bushel and a Peck,” “If I Were a Bell,” “Luck be a Lady,” and “Sit Down, You’re Rockin’ the Boat.” TexARTS invites audiences to share in old memories and make new ones with this timeless classic.

J. Quinton Johnson (Sky Masterson) recently appeared in the Zilker Hillside Theatre production of “Oklahoma” and was a featured soloist in Ramin Karimloo’s “Broadway to Bluegrass” concert. In 2014, Johnson was nominated for a B. Iden Payne award for his portrayal of Benny in the University of Texas at Austin’s production of “In the Heights.”

Opposite Johnson is Taylor Colleen Smit (Miss Sarah Brown). Smit has performed in regional productions of “South Pacific” and “Catch Me If You Can” and has performed several shows with Disney Cruise Line. Smit was awarded best principle female in a musical in 2014 for her role as Nelly Forbush  in “South Pacific” by the Theatre Bay Area Awards.

Amy Nichols (Miss Adelaide) returns to TexARTS where she was featured in “Midlife: the Crisis Musical.” Nichols’ other Austin credits include “The Drowsy Chaperone” at the Zach.

Paul Sanchez (Nicely-Nicely Johnson) is an active performer and teacher in the Austin area whose credits include “Tommy” at the Zach and several productions with the Austin Lyric Opera.

TexARTS welcomes Kasey RT Graham to direct “Guys and Dolls.” In addition to his work with Broadway’s “On the Twentieth Century,” Graham’s credits include the national tour of “Dirty Dancing,” and regional productions of “Spelling Bee” and “Into the Woods.” Joining Graham in bringing this classic musical to life are music director Robert L. Frost from the Eugene O’Neil Theater Center and choreographer Michael Clement from Disney Entertainment.

“Guys and Dolls: A Musical Fable of Broadway” is based on a story and characters of Damon Runyon. The music and lyrics are by Frank Loesser, and the book is by Jo Swerling and Abe Burrows.

Guys and Dolls
by Loesser, Swerling and Burrows
Tex-Arts

A special Student Night has been added to the run of the TexARTS Professional Series production of “Guys and Dolls.” On Thursday, August 20 at 7:30 p.m. at the Kam and James Morris Theatre, students can attend the show for 50% off the regular ticket price with a valid student ID. After the show, the audience is invited to stay for a talk-back with the cast and creative team.

All performances will be held at the intimate Kam and James Morris Theatre at TexARTS’ Erin Doherty Studios, 2300 Lohman's Spur, Suite #160, Lakeway, TX. The lounge opens one hour prior to curtain and offers a full bar and a pre-show happy hour. Parking is free. 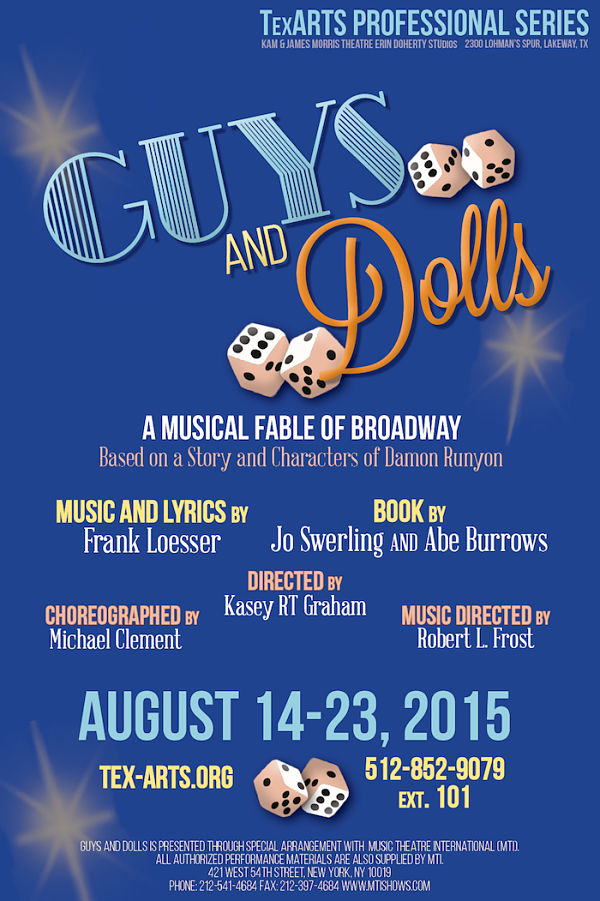