For Fear the Glass May Shatter
by Vortex Repertory Theatre

For Fear the Glass May Shatter explores the science and struggle around Nobel Prize-winning physicist Wolfgang Pauli, whose personal crisis led him to Carl Jung as a patient, friend, and critic. A key figure in nuclear physics from 1920-1958, Pauli was also the anonymous dreamer in Jung's "Psychology and Alchemy." The opera recapitulates 20th-century music and features neuro-physics dream music built from oscillating fields and statistical mechanics. The narrative manifests through themes including scientific criticism, competition and collaboration, concern for reputation, the social and personal politics of war, and the role of women in science and culture.

Conceived and written by David DeMaris, For Fear the Glass May Shatter was developed in 2014 through workshops with the cast and musical collaborator Emily Breedlove. Directed by Bonnie Cullum. Choreography by Heather Huggins. Scenic Design by Ann Marie Gordon. Lighting Design by Jason Amato.  Costume Design by Jane Clarke. Video Design by Lowell Bartholomee.  Stage Management by Tamara L. Farley.

For Fear the Glass May Shatter is funded and supported in part by VORTEX Repertory Company, a grant from the Texas Commission on the Arts, and by the City of Austin Economic Development Department/Cultural Arts Division believing an investment in the Arts is an investment in Austin's future. 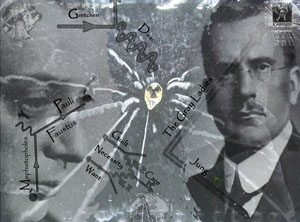