Fans of The Phantom of the Opera, The Hunchback of Notre Dame, Beauty and the Beast, and Jekyll and Hyde will fall for Cyrano the musical. Set in 1640s Paris, it is a swashbuckling romp with a case of hidden identity, a passionate love story and one unforgettable nose. MacTheatre is proud to be the first high school in the world to put on Cyrano, which debuted on Broadway in 1993.

MacTheatre’s productions are known for their professionalism, technical presentation and entertainment value.  All shows will be in the McCallum Arts Center at 5600 Sunshine Dr. in central Austin. Show dates:

Earlier this year Austin Entertainment Weekly named MacTheatre as the Most Outstanding Academic Theatre in Austin along with St. Edward’s University. More information on MAC Theatre’s 63rd season can be found at http://mactheatre.com/

Wikipedia: The original Dutch production Cyrano de Musical premiered in 1992 at the Stadsschouwburg (City Theatre) in Amsterdam. It is based on Edmond Rostand's classic 1897 play of the same namef ocusing on a love triangle involving the large-nosed poetic Cyrano de Bergerac, his beautiful cousin Roxane, and his classically handsome but inarticulate friend Christian de Neuvillette who, unaware of Cyrano's unrequited passion for Roxane, imposes upon him to provide the romantic words he can use to woo her successfully in mid-17th century Paris. Its style is closer to that of Les Misérables and The Phantom of the Opera than a traditional Broadway book musical.

After 38 previews, the Broadway production, directed by Eddy Habbema, opened on November 21, 1993 at the Neil Simon Theatre, where it ran for 137 performances. The cast included Bill van Dijk as Cyrano, Anne Runolfsson as Roxane, and Paul Anthony Stewart as Christian, with James Barbour and Jeff Gardner in supporting roles.

Tickets may be purchased at the door or at https://mccallum.ludustickets.com/  Student tickets are $7; adults are $16 and seniors are $12. 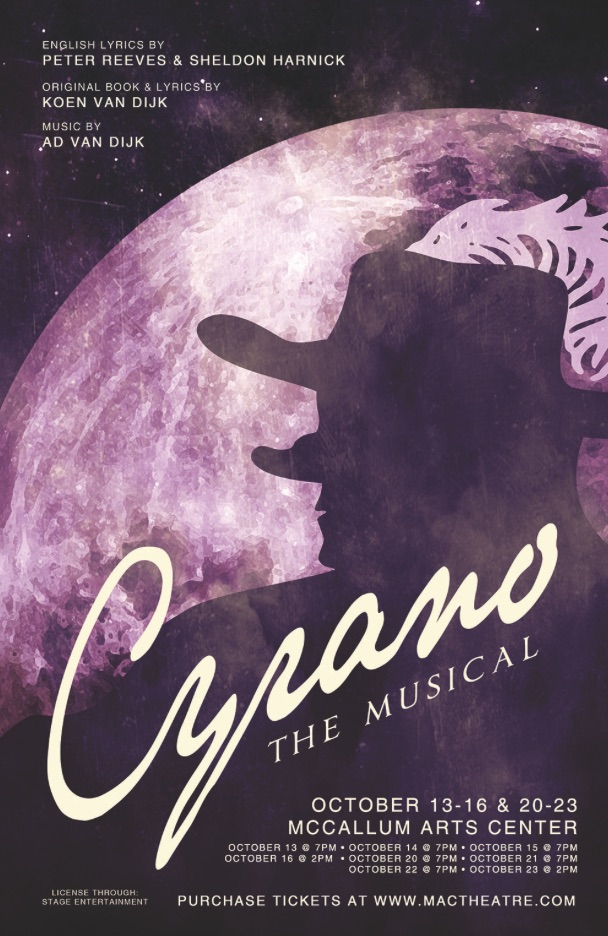