Is there someone who has not wanted to know the deepest and most intimate secrets of a love partner? The truth serum or burundanga as it is known in South America, it is the initial component of this fun and entertaining comedy where stories of terrorism, love, kidnappings, and friendship are mixed with great originality.

Once again, Austin Latino Theater Alliance brings a great montage with international quality and provides us with a theater season full of entertainment. Opening on May 22, and running untilJune 21, ALTA Teatro presents BURUNDANGA, the successful comedy by the Spanish playwright Jordi Galceran, and directed by the renowned director Alejandro Pedemonte.

“We have put a lot of care in the selection of this season´s play with the intention of continuing to enrich the quality of Spanish theater in Austin, and to stay on the forefront of what is trending across the globe”, said Artistic Director Pedemonte.

Burundanga opened in Madrid in 2011 and has been on stage for 4 season, it has been watched by more than 250, 000 audience members in  Spain, and is currently being produced in various  venues across Latinamerica. Austin will not be the exception to this successful run.  The cast for BURUNDANGA in Austin is comprised by: Juan Cuspinera, Bárbara Garza, Daniela Camiro, Héctor Vera and Mario Ramírez.

Burundanga the story:   Berta (Barbara Garza) is pregnant but she does not know if having the baby is the best thing to do. She has doubts about whether or not Manel (Juan Cuspinera ) is the man of her life. To clear all these doubts, Silvia ( Daniela Camiro) convinces Berta to use BURUNDANGA as the solution to her problem. Doing this, she will, once and for all, dispel any doubts she has about her boyfriend. What they don't know, is that this will lead to a series of unexpected situations.

Burundanga is a play of entanglements in which everyday situations of social interest are satirized in a subtle way .

In complicity with everyday language and the common experiences of people , Jordi Galceran (writer of “The Gronholm Method” and “Cancun”, among other theatrical wonders) achieves a very light comedy in which Burundanga (known as scopolamine in Colombia) is an evidential catalyst that unchains a series of situations from which the characters of the story will not know how to escape.

Shows will run from Thursdays to Saturdays and begin at 8 p.m. Early arrival is suggested. Tickets are $15 general admission and $12 for students and seniors. Advance tickets can be purchased online here. The show will be presented in Spanish with English surtitles and has a Classification of “R.” 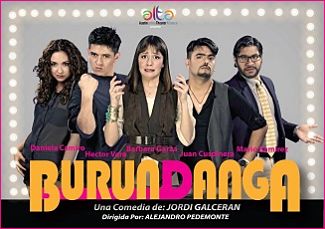 ALTA (Austin Latino Theater Alliance) was born 14 years ago with the intention of uniting and supporting the different Latino and Hispanic theater groups in the community. As such, the …