Anything Goes
by Lee Colee Studios

Anything Goes is a musical with music and lyrics by Cole Porter. The original book was a collaborative effort by Guy Bolton and P.G. Wodehouse, heavily revised by the team of Howard Lindsay and Russel Crouse. The story concerns madcap antics aboard an ocean liner bound from New York to London. Billy Crocker is a stowaway in love with heiress Hope Harcourt, who is engaged to Lord Evelyn Oakleigh. Nightclub singer Reno Sweeney and Public Enemy #13 Moonface Martin aid Billy in his quest to win Hope. The musical introduced such songs as "Anything Goes", "You're the Top", and "I Get a Kick Out of You."

Since its 1934 debut at the Alvin Theatre (now known as the Neil Simon Theatre) on Broadway, the musical has been revived several times in the United States and Britain and has been filmed twice. The musical has long been a popular choice for school and community productions.[1]

The original idea for a musical set on board an ocean liner came from producer Vinton Freedley, who was living on a boat, having left the US to avoid his creditors.[2] He selected the writing team, P. G. Wodehouse and Guy Bolton, and the star, Ethel Merman. The first draft of the show was called Crazy Week, which became Hard to Get, and finally Anything Goes. The original plot involved a bomb threat, a shipwreck, and hijinks on a desert island,[3] but, just a few weeks before the show was due to open, a fire on board the passenger ship SS Morro Castle caused the deaths of 138 passengers and crew members. According to one version,[4] Freedley judged that to proceed with a show on a similar subject would be in dubious taste, and he insisted on changes to the script. However, theatre historian Lee Davis maintains that Freedley wanted the script changing because it was "a hopeless mess."[5] Bolton and Wodehouse were in England at the time and were thus no longer available, so Freedley turned to his director, Howard Lindsay, to write a new book.[3] Lindsay recruited press agent Russel Crouse as his collaborator, beginning a lifelong writing partnership.[3] The roles of Billy Crocker and Moonface Martin were written for the well-known comedy team William Gaxton and Victor Moore, and Gaxton's talent for assuming various disguises was featured in the libretto. 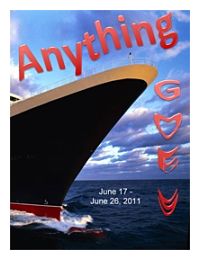