Feb. 13th will be a very special night at the Hill Country Community Theatre. The festivities begin at 6:30 pm with an opening night gala. HCCT will serve complimentary hors d’oeuvre and drinks until 7:30 pm, when the curtain will rise on their latest musical extravaganza All I Really Need To Know I Learned In Kindergarten.  Jenny Lavery, the director of last summer's hit Willy Wonka, directs the musical revue. Kindergarten opens Thursday, Feb. 13, at the Hill Country Community Theatre (HCCT) in Cottonwood Shores (4003 FM 2147 West, between Marble Falls and Horseshoe Bay). The production runs Thursdays through Sundays, Feb. 13-23rd, at 7:30 p.m., with 2:15 p.m. Sunday, matinees. Based on the best-selling books by Robert Fulghum, Kindergarten takes a funny and insightful look at what is profound in everyday life. A series of delightful songs and stories celebrate our very existence; from the whimsy of childhood to the wisdom of old age.
The cast includes HCCT regulars Becky Barton of Marble Falls, Lee Wilson of Burnet, David Sweigart of Meadowlakes and Jana Diamond of Marble Falls. Debuting on the HCCT is Tana Morris of Cedar Creek. Mandi Whittlesey of Spicewood is the Musical Director. Deann Randle of Horseshoe Bay will serve as Stage Manager. Steve Reily of Meadowlakes is the Scenic and Lighting Designer.
“The cast is five very talented actors-singers-storytellers.”, said Lavery. “And Robert Fulghum’s writing is very universal. He writes stories that are about all of us. The audience should expect a charming night of theatre that is funny, touching and very insightful.”

Vast praise has been lavished upon the best-selling books and the stage version of Kindergarten.  In 1988 Robert Fulghum published his first collection of stories. The book was subtitled "Uncommon Thoughts on Common Things." In the book Fulghum expounds on his down-home philosophy of seeing the world through the eyes of a child. It was a huge success, staying on The New York Times best-seller list for over two years. This led to the publication of seven more titles in the series. There are currently more than 16 million copies of his books in print, published in 27 languages and in 103 countries. His prose style, although very simple and direct, is recognized for its life-affirming maxims in such mundane matters as zoos, leaf-raking, and dusting.
Eventually his eight books of essays were transformed into a stage productions conceived and adapted by Ernest Zulia, with music and lyrics by David Caldwell. To date there have been more than 2,000 national and international productions of the play. The Chicago Sun-Times described Kindergarten as, “A refreshingly intimate combination of theatre and storytelling.  Gentle…funny…joyous. Sparks of recognition ignited the audience.”  The Syracuse Herald Journal called the musical, “A lighthearted beautifully styled dramatization of Fulghum’s writings.”  Finally, the reviewer for The Los Angeles Times raved saying, “Eighteen thought-provoking and sniffle-provoking vignettes left the audiences searching for hankies.”

All I Really Need To Know I Learned In Kindergarten
by Robert Fulghum, adapted by Ernest Zulia and David Caldwell
Hill Country Community Theatre (HCCT)

Admission is $20 for adults and $9 for students age 16 and under. Group rates also are available. Seating per show is limited to 147 persons. Tickets can be purchased online at www.thehcct.org.  Reservations can also be made at the box office (noon-4 p.m., Mon.-Fri.), 830-798-8944, beginning Feb. 3rd for season members and Feb. 6th for the general public. 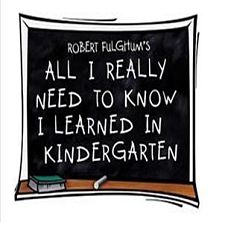