The Fantasticks
by City Theatre Company

To end the summer “Back in Show Business” season, City Theatre Austin is honored to present the musical classic, The Fantasticks. It is a show years in the making and the company’s first full-length musical production since their 2018 mega-hit sensation Tommy. The curtains rises September 2 – 18 at Trinity Street Playhouse located at the First Baptist Church of Austin.

The Fantasticks is the forever-inspiring work of American musical theatre and one of the longest-running shows in Broadway history, playing for more than four decades and over 17,000 performances at the intimate Sullivan Street Playhouse in Greenwich Village, and winning a special Tony Award for the production’s success. Come celebrate the eternal power of love! Follow your imagination into a whimsical tale of young lovers, schemers, meddling parents, music, magic, and moonlight, with the truest bond of family, friendship, and home. In a timeless story and featuring the classic songs “Try to Remember,” and “Never Say No,” this simple and beautiful ensemble piece is as beloved and fitting as it was when it written over sixty years ago.

Review by Bob Ableman for the Austin Chronicle, September 8, 2022

The little musical – and writers - that could.

Few collaborations can compare to that of Tom Jones and Harvey Schmidt, a partnership that lasted nearly six decades. Having seen significant changes in the world of theatre, Jones and Schmidt stuck with their vision of intimate, often minimalist shows that defied the notion that all musicals require a glitzy, high-kicking chorus. They met as students at the University of Texas through the Curtain Club, the university drama troupe. After being drafted in the army during the Korean War – stationed at separate posts and collaborating on songs through the mail - Jones and Schmidt headed off to take on Broadway and NYC. Soon came an opportunity to write a musical for one-act showcases – recently, they had been working on an adaptation of Les Romanesques by French dramatist Edmond Rostand. They made a complete revision of it, rewrote the title and all the songs…except for "Try to Remember"…and the rest is history. The Fantasticks became a staple of the New York City theatre scene and went on to having the longest continuous run for an American show - 17,162 performances (May 3, 1960, to January 13, 2002). To this date, it has become established as perhaps the most performed musical in the world, having been adapted to film, and produced around the globe in sixty-seven countries by professional, community, and educational theatres.

City Theatre is celebrating its 15th anniversary season of live theatre entertainment. CTC is an Austin-based, not-for-profit arts organization and is sponsored in part by the Austin Creative Alliance and the Cultural Arts Division of the City of Austin. Founded in 2006, the company has been recognized by the Austin Critics Table Awards, the B. Iden Payne Awards, the Central Texas Excellence in Theatre Awards, BroadwayWorld Austin, Central Texas Live Theatre, and has twice been voted “Best Theatre Company” by Austin American-Statesman’s Austin 360. CTC is dedicated in providing a quality, reputable, and diverse public theatre and stage entertainment experience that is accessible to all artists and the entire Austin community. CTC continues to offer its student and group discount ticket program for any show. Put a little theatre in your life!

The Fantasticks, a musical by Tom Jones and Harvey Schmidt

Current COVID safety protocol to be followed at showtime. 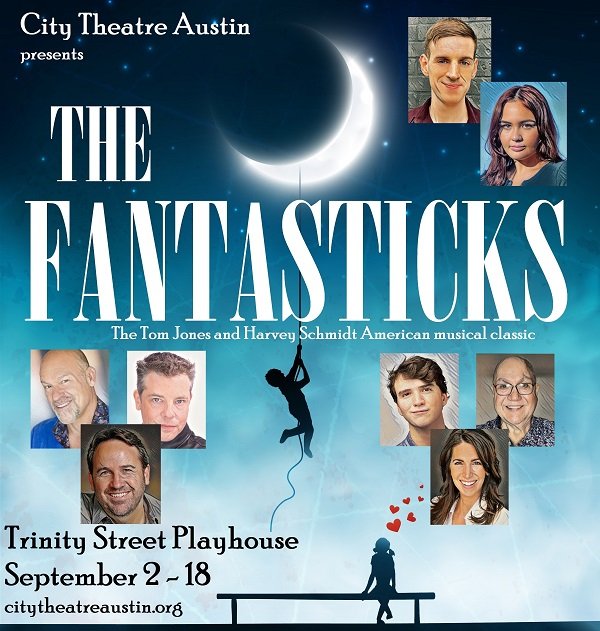