Backstage Fairytale is the story of Adam, an aspiring playwright, who visits his former lover, Celeste, now a successful New York actor. Adam reveals that he’s written a play about their relationship and asks her to read it. Though hesitant at first, she agrees when he grants her “veto power” to stop its production if she feels the play isn’t truthful. The pair meets two days later. Celeste objects to her portrayal; they then discuss the play and the failure of their relationship. Adam confesses he wrote the play to win her back. Will the couple reunite and will Celeste give her blessing to the play’s production?

As the fourth installment of the 2022 New Play Development Series, Aria Creative Productions will present a staged reading of “Backstage Fairytale” by Michael John McGoldrick. Jade Esteban Estrada will direct.

The purpose of the New Play Development Series is to give playwrights an opportunity to further develop new works. Each official selection of the series will receive two rehearsals before the staged reading and an audience feedback session.

Michael John McGoldrick is a New Jersey-based playwright. His play Wolf and Badger was produced by The Main Street Players in Miami last year. His play Allies was selected for residency at The New Jersey PlayLab in 2020. His plays have been finalists/winners in competitions sponsored by Trustus Theatre, Alleyway Theater, Playhouse on the Square, City Theater and others.

“I once wanted to write a play about Noel Coward that I ended up not writing,” said McGoldrick in a statement regarding his inspiration for writing the play. “But my research into Coward’s life prompted me to ask a set of intriguing questions: how does the ‘artifice’ of theater relate to the real-life circumstances of the people who create it? Why do creative people bother to create at all? This became the soil where Backstage Fairytale eventually took root.”

“I’m overjoyed to be working with Jade Esteban Estrada and the rest of the team at Aria Creative Productions,” McGoldrick stated. “I’m very intrigued to see how this innovative company will place its own unique stamp on my play.”

The reading will feature Amy Abrigo as Celeste and Julio Alberto Sepulveda as Adam. Melissa Martinez will be the stage directions reader.

“For a playwright, a staged reading is an important preparatory step in the creative process,” said Estrada. “Last month’s readings, titled The Politics of Modern Love, was an artistically rewarding experience. I am equally thrilled about this month’s selection and our exceptional cast.”

The New Play Development Series is an on-going initiative.

“The purpose of this program is to bring more fully developed plays to our stages,” said Estrada. “When a great, meaningful play has an opening night, it is likely that the play had a table reading, a staged reading, and one or more workshop development performances. In my own experience as a playwright, I get a better picture of what my play is about after I present it in front of a live audience.”

Performance Date: May 25, 2022, Wednesday at 7 p.m.
Presented at: Alamo City Studios 1113 Houston Street San Antonio, Texas 78205
Tickets are $10.00 general admission. Tickets are available at the door or online at Brown Paper Tickets. No refunds. Exchange only for another show date. Limited seating. Masks are strongly encouraged. 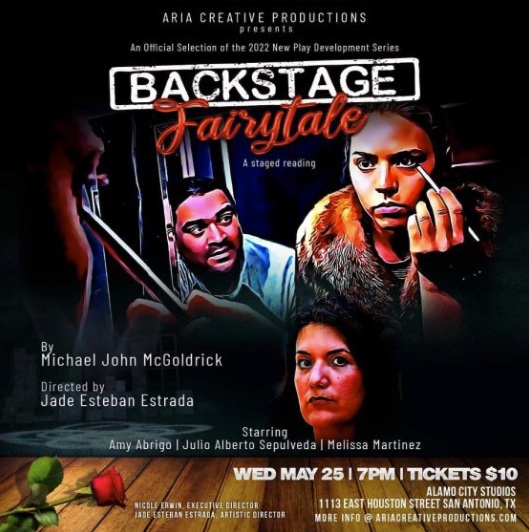