Eurydice is a play that contrasts the archetypal themes of life, love, and death with the fondly familiar aspects of everyday life. Influenced by the playwright’s loss of her own father, Eurydice is a reminder to take pleasure in mundane moments, and to explore the extraordinary nature of life with childlike boldness and curiosity.

Sarah Ruhl’s brilliant reimagining of the Orpheus myth from a female point of-view, plays May 12-15, 2022.

A charming and talented musician, Orpheus is the son of a Thracian king and the muse Calliope. When Orpheus plays, every animate and inanimate thing follows and his music can divert the course of rivers. He meets and marries the maiden Eurydice—thought to be perhaps a nymph (minor Greek deity related to nature), or maybe a daughter of Apollo. Their joy is brief; on their wedding day Eurydice travels through a meadow with her bridesmaids (in some versions, she’s running to escape the sexual advances of a satyr or shepherd) and she steps into a pit of vipers. She is bitten by a snake and dies. Overcome with grief, Orpheus strikes a sad note on his lyre and travels to the Underworld. A normal mortal would have perished, but Orpheus uses his music to charm the spirits and Hades, the Lord of the Underworld. Hades agrees to let Eurydice return to the world of the living on one condition: that she must follow Orpheus and he could not look back at her until they reach the outer world. The young couple sets off as proscribed. Whether his faith was not able to withstand the test or whether he was tricked by the gods, Orpheus fatefully looks back at Eurydice. She is taken back to the Underworld. In some versions, Orpheus is simply heartbroken and in others he is punished, wandering alone with his lyre until he is torn apart by a band of Maeneds.

Sarah Ruhl’s play uses the basic myth as inspiration, but differs in many ways. As classicist M. Owen Lee said in his book entitled Virgil as Orpheus, “A great artist never touches a myth without developing, expanding, and sometimes radically changing it.” Eurydice’s father doesn’t play a role in the original myth, but he plays a pivotal role in Ruhl’s play. In the classical versions of the story, Eurydice is a passive victim. In Ovid’s version of the story, she doesn’t speak at all and in Virgil’s poem she says only a few words after Orpheus has already looked back at her. In Sarah Ruhl’s Eurydice, she is given both a voice and a choice.

1 hour and 45 minutes with 15 minute intermission 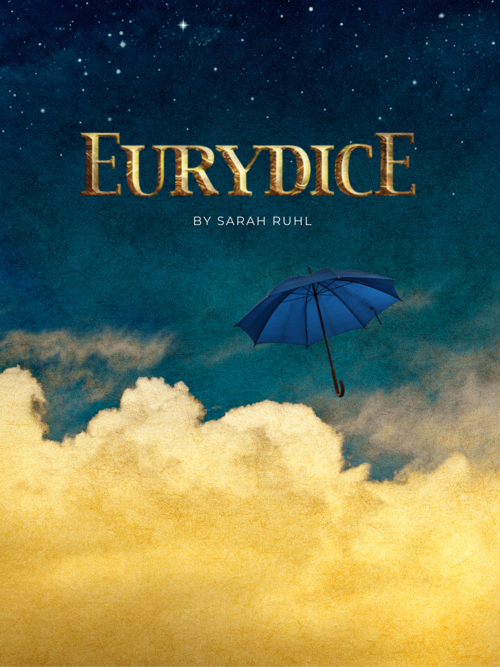