Five women get together for their birthdays, each with her own story, to drink, celebrate, commiserate and support each other as they negotiate through marriage, work, divorce, birth and kids, while solving the problems of the world. 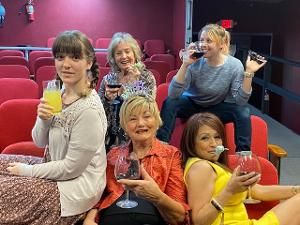 Cheryl, Karen, Monica and Abbie started Birthday Club five years ago when their friend Jennifer was diagnosed with cancer, as a support group to help her get through it. When Jennifer recently passed away, they had an opening for a new member.

However, it’s not easy to join Birthday Club. Birthday Club is very exclusive, and there’s a three-year waiting list. They bring in Sarah as a potential member, but first Sarah must make it through the “interview,” and agree to abide by the eight rules of Birthday Club, to be considered an official member.

One by one, they reveal their personal, work and family issues, and when one of them admits she went out with another’s husband, the vodka hits the fan. The question is: Will Birthday Club survive, or will Rule #5 end it forever

Directed by Kärin Frasier, the cast is made up of both familiar and new faces to the HCCT stage. "I think we hit the jackpot with this cast," said Executive Director, Patty Gosselin. Sally Stemac will portray Cheryl; Sharon Penny is featured as Emily; Bebe Rocha appears as Abbie; Ocean Leigh portrays Kathy; and Brigid Cooley will play the role of Sarah.

"The cast has good chemistry," enthused Kärin, "and that makes a great show for the audience."